Johnson says 'no checks' at Irish border, rails against Corbyn

British Prime Minister Boris Johnson has urged the European Union to compromise as he prepares to put forward what he called “constructive and reasonable proposals” to Brussels to resolve the Brexit deadlock.

Addressing the Conservative Party conference on Wednesday, Johnson warned that the country was ready to leave without a deal on October 31 if no agreement was reached – even though he is compelled by law to seek a deadline extension in the case of such an event.

The prime minister insisted his plan to replace the Irish backstop, which involves a customs union between the United Kingdom and the bloc in order to avoid a hard Irish border, would “in no circumstances” result in checks at or near the border of Northern Ireland – though he did not define “near”.

“Today in Brussels we are tabling what I believe are constructive and reasonable proposals which provide a compromise for both sides,” he told the party faithful in Manchester, having skipped what have certainly been a hostile House of Commons at Prime Minister’s Questions.

“We will under no circumstances have checks at or near the border in Northern Ireland. We will respect the peace process and the Good Friday agreement,” he said, referring to a 1998 deal that ended decades of violence.

“And by a process of renewable democratic consent by the executive and assembly of Northern Ireland we will go further and protect the existing regulatory arrangements for farmers and other businesses on both sides of the border.

“And at the same time, we will allow the UK – whole and entire – to withdraw from the EU, with control of our own trade policy from the start.”

Johnson will speak to European Commission President Jean-Claude Juncker on Wednesday afternoon, but the commission said it would not “pre-empt any reaction” before having a chance to study the proposals to replace the backstop, which was a part of a deal the EU reached with Johnson’s predecessor, Theresa May.

Johnson said his “plan” – on which the speech itself was light on detail – represented a “compromise by the UK”.

“I hope very much that our friends understand that and compromise in their turn,” he told the conference.

“Because if we fail to get an agreement because of what is essentially a technical discussion of the exact nature of future customs checks, when that technology is improving the whole time, then let us be in no doubt that the alternative is no deal.

Not one border but two

British officials have described the texts being presented to the EU as a “final offer” – but observers say Johnson is hoping to start a new conversation.

“Crucially, both the ERG [an influential Tory Eurosceptic faction] and the DUP [Northern Irish conservatives] are on board with this new Brexit plan,” tweeted Sebastian Payne, the Financial Times Whitehall correspondent. “No10 hopes to use this unity to show the EU that if they engage with the Brexit proposals, a deal can get through Parliament.”

The plan, according to leaked reports, involves creating not one hard border, but two “soft” borders – a regulatory border between Britain and Northern Ireland in the Irish Sea for four years and customs checks between the North and the Irish Republic.

For decades before the signing of the Good Friday Agreement, customs posts have been targeted by Republican hardliners. Their presence provides a tangible representation of armed British forces on the island of Ireland. The worry is that attacks on customs checkpoints would lead to the British military being deployed to defend them, and the whole spiral of violence then beginning again.

Simon Coveney, Ireland’s deputy prime minister, said late on Tuesday that Johnson’s idea was “no basis for an agreement”, calling it “concerning, to say the least”.

In Manchester, Johnson told the conference that people felt they were being “taken for fools” by Westminster’s failure to honour the result of the 2016 referendum and warned of “grave consequences” if Brexit was not delivered.

Moving away from Brexit, Johnson trumpeted the achievements and potential of British industry, citing the UK’s national nuclear fusion research centre, and saying how it was “on the verge” of supplying nuclear fusion energy to the world. Fusion, the process which powers the sun, is considered the “holy grail” of energy sources, and experts say a breakthrough which would lead to commercial distribution is decades away.

Johnson also failed to mention that the research centre, at Culham in Oxfordshire, is part-funded by the EU’s EuroFusion consortium, with the Euratom agency funding the landmark, world-leading JET project in its entirety.

He went on to insist the Conservatives were “the party of the NHS” while also solving “the problem of social care”, although he did not set out how. The National Health Service (NHS) was founded by in 1948 by a Labour government – Labour is now the country’s main opposition party and is led by Jeremy Corbyn.

“If Jeremy Corbyn were allowed into Downing Street, he would whack up your taxes, he would foul up the economy, he would rip up the alliance between Britain and the USA and he would break up the UK,” Johnson said. “We cannot allow it to happen.”

A new poll of 1,011 UK adults by UnHerd Insight found 60 percent are in favour of the nationalisation of rail companies; among Labour voters the figure rise to more than 80 percent. There is also strong general public support for the nationalisation of water (55 percent), electricity (52 percent) and gas (51 percent).

Back in the conference hall in Manchester, Johnson ranted against parliament, which he unlawfully suspended last month after a series of humiliating defeats, before the highest court in the land unanimously forced the legislature’s reopening, delivering another blow to the prime minister.

If Parliament were a school, inspectors “would be shutting it down”, and if it were a reality TV show “the whole lot of us would have been voted out of the jungle,” he said.

“The sad truth is that voters have more say over I’m a Celebrity than they do over this House of Commons,” Johnson added.

The prime minister has lost his ability to govern through Parliament after sacking a “rebel alliance” of 21 MPs who voted against the government on the bill which compels the prime minister to seek a Brexit extension. 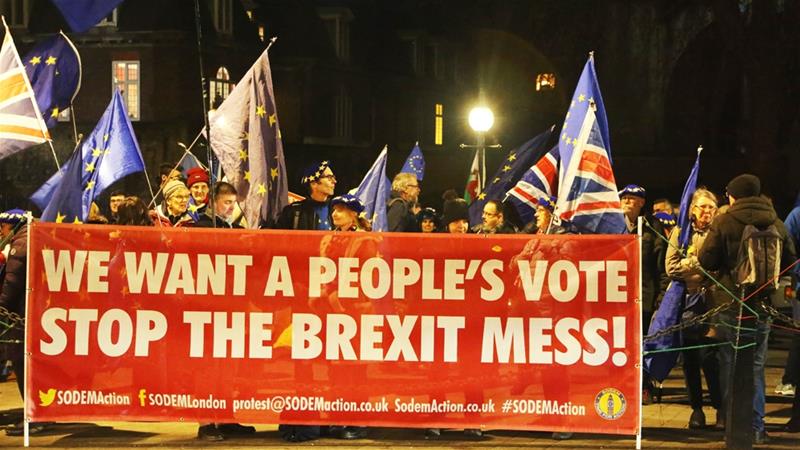 Who paid for Brexit?