Joy as pubs and shops throw open their doors at last

It’s the Glorious 12th! Thirsty revellers rush to the pubs while others get minute-past-midnight haircuts and spray tans as Covid rules are eased at LAST – while Boris warns Britain to ‘behave responsibly’

Up and down the land, shopkeepers were adding the finishing touches to their stores, landlords were testing their beer and restaurants were stocking their kitchens.

Yesterday’s frenzy of preparation was all for today – dubbed the ‘Glorious Twelfth’ – when beer gardens, shops, hairdressers and gyms will join libraries, zoos and nail salons in reopening.

Some eager patrons even rushed to the pubs at midnight as they flocked to the beer gardens the minute restrictions were eased.

A long queue was seen outside The Oak Inn in Coventry which is open until 6am, offering pizzas and kebabs throughout the night to the thirsty revellers.

Meanwhile at the Kentish Belle in Bexley Heath, groups of six flocked to its 12am opening to make the most of the latest easing in restrictions.

Others had different priorities and headed straight to the hairdressers to fix their lockdown hair after months of isolation.

Some beauticians even visited their customers’ homes for much-needed treatments such as spray tans after the clock struck midnight. 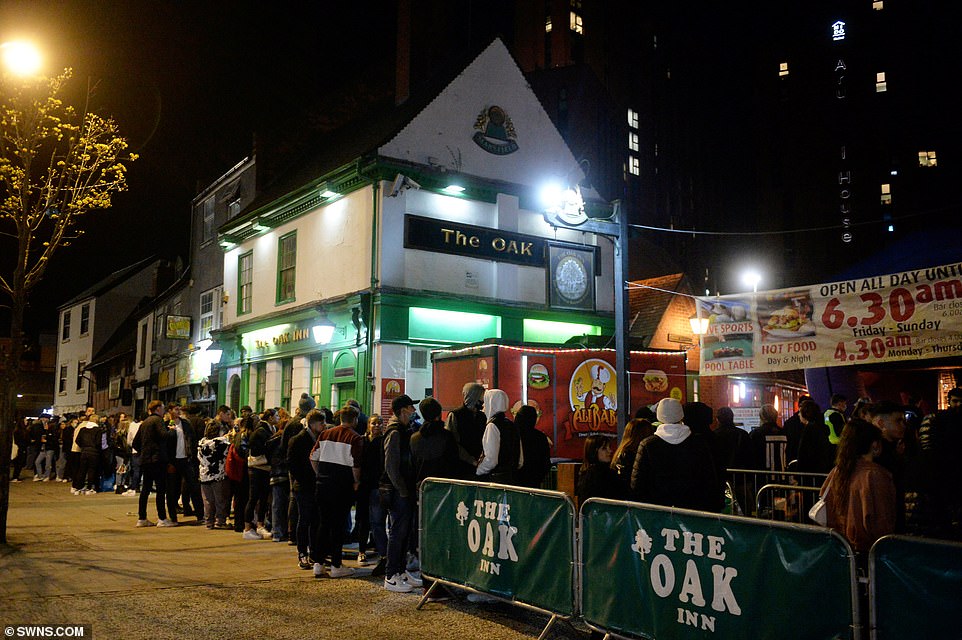 Eager patrons queued outside The Oak Inn in Coventry at midnight on Sunday as Covid restrictions were partially eased, allowing for beer gardens to open 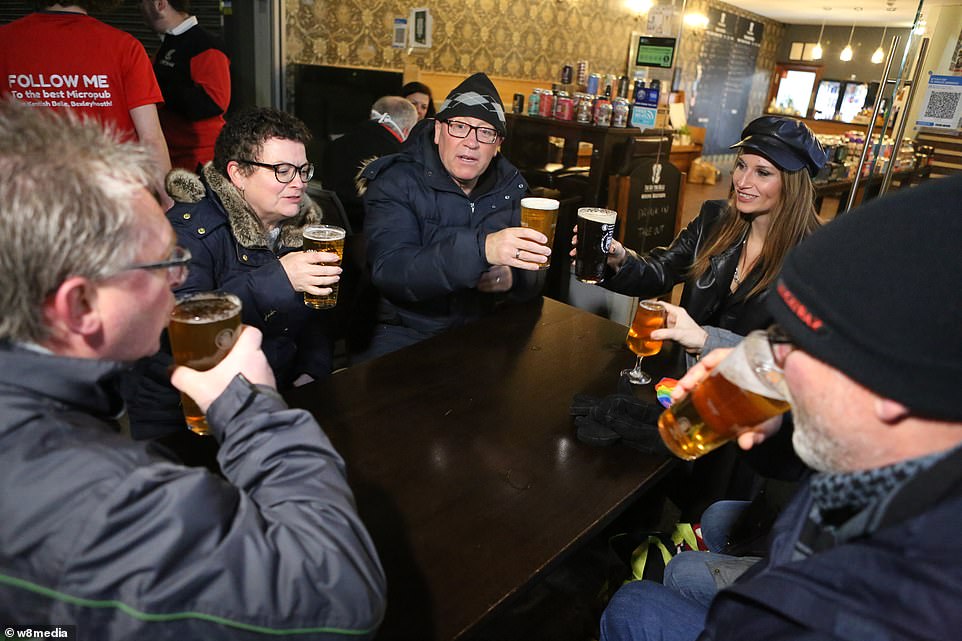 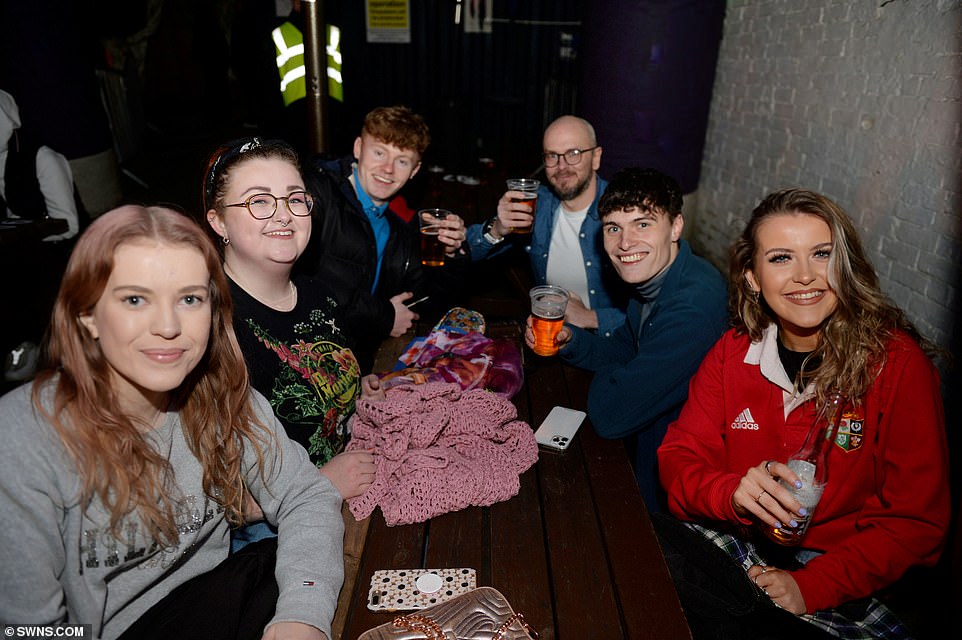 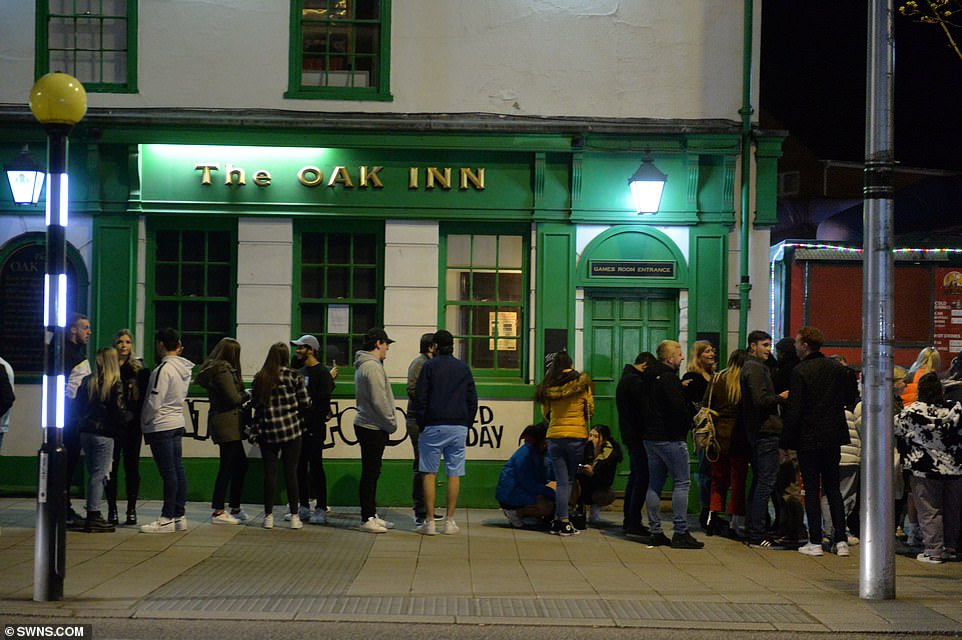 The Coventry establishment is licensed until 6am, and also plans to sell food throughout the night, such as pizzas, burgers and kebabs 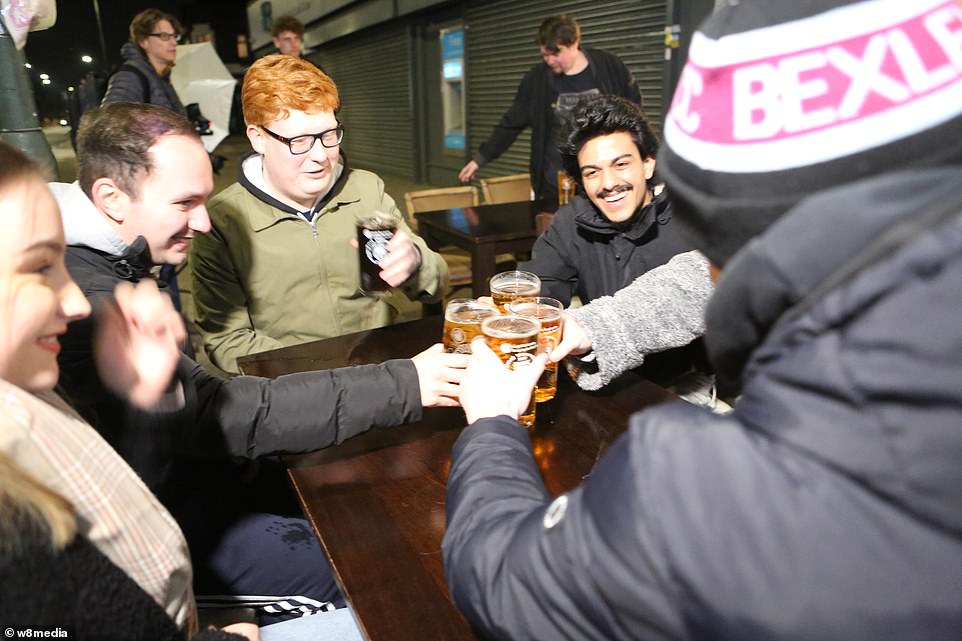 The midnight drinks were a long time coming for punters who have been forced to stay away from pubs, bars and restaurants for months 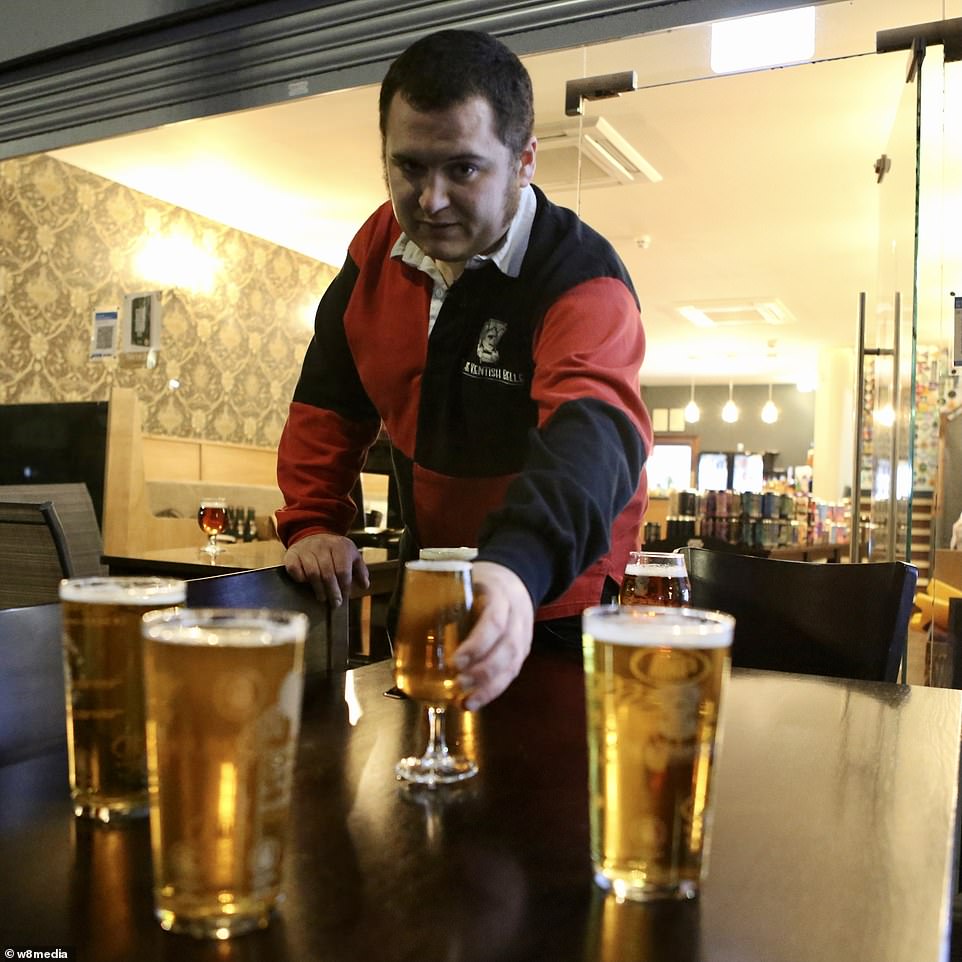 While many pubs will have to remain shut because they cannot offer outdoor space, others had a headstart by opening their doors at midnight

The vaccine programme coupled with the ‘palpable sense of excitement’ is expected to make this post-lockdown reopening the strongest yet, experts said. Customers are predicted to spend £4.5billion this week.

More than half of hospitality businesses that are opening have splashed out to make outdoor areas bigger, spending an average of £9,040 on each venue, according to industry group UKHospitality.

Pubs have been flooded with bookings, with the British Beer and Pub Association predicting the nation will get through 15million pints this week.

For many venues it will be the first revenue since England’s January 5 lockdown. The unpredictable weather remained the number one worry.

There is also confusion among landlords who have been told their outdoor seating does not qualify as outdoors according to government guidance.

Shelters and temporary structures must have half the walls open at all times to count as outdoors.

But local councils are interpreting the rules differently leaving some landlords and restaurant owners in the lurch on the eve of their supposed reopening.

One landlord has been told his walled garden pub cannot reopen despite having taken more than 1,000 bookings.

Another publican in Brighton told The Telegraph he was ‘devastated’ that his pub could not reopen even though it has a substantial outdoor space.

But other landlords are excited for the influx of customers despite reservations about the weather.

Henry Cripps, from the Three Oaks pub in Gerrards Cross, Buckinghamshire, said: ‘We realise that almost everything for the next five weeks is weather dependent so we have everything crossed for sun. We couldn’t wait to see our regulars, so we have invested heavily in our garden.’

Some restrictions have eased since pubs were last open. Customers will not need to order a substantial meal with alcoholic drinks and there will be no 10pm curfew. But Boris Johnson has postponed his planned celebratory pint because of Prince Philip’s death on Friday.

However, a green group has warned the rush to drink and dine outdoors will cause a spike in air pollution from gas burning patio heaters. Oliver Lord, of Environmental Defence Fund Europe, said: ‘We need to support the hospitality sector to bounce back safely and use electric heaters, which are far cleaner and more efficient.’

Hairdressers are also booked up for weeks. Joanna Hansford, 46, who runs a high-end salon in Mayfair with her mother Jo, has 2,000 clients booked in for April and was opening at 5am this morning.

She said: ‘We’re very excited, it’s been a long lockdown and it has been a lot tougher.’ 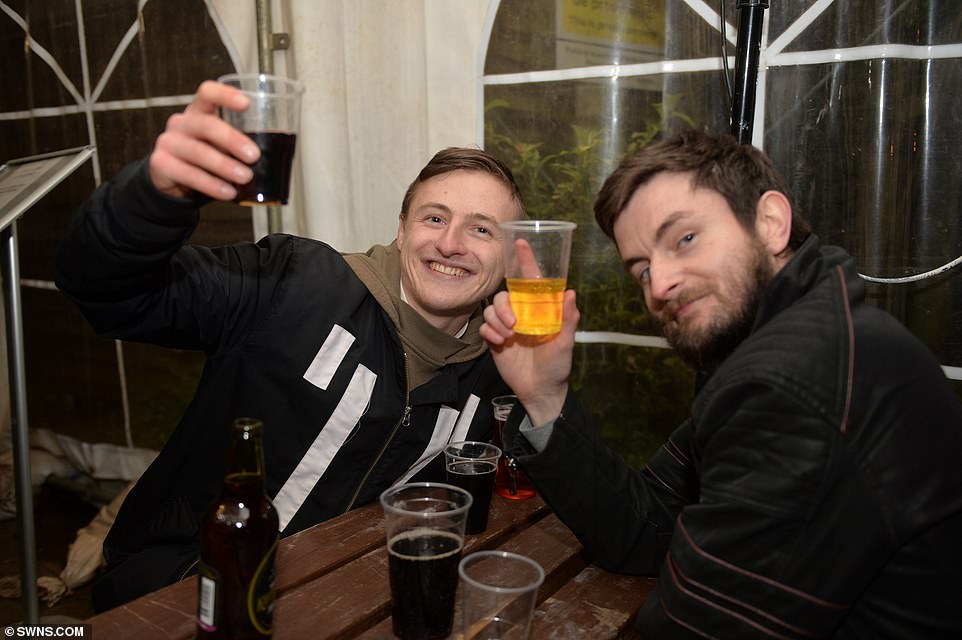 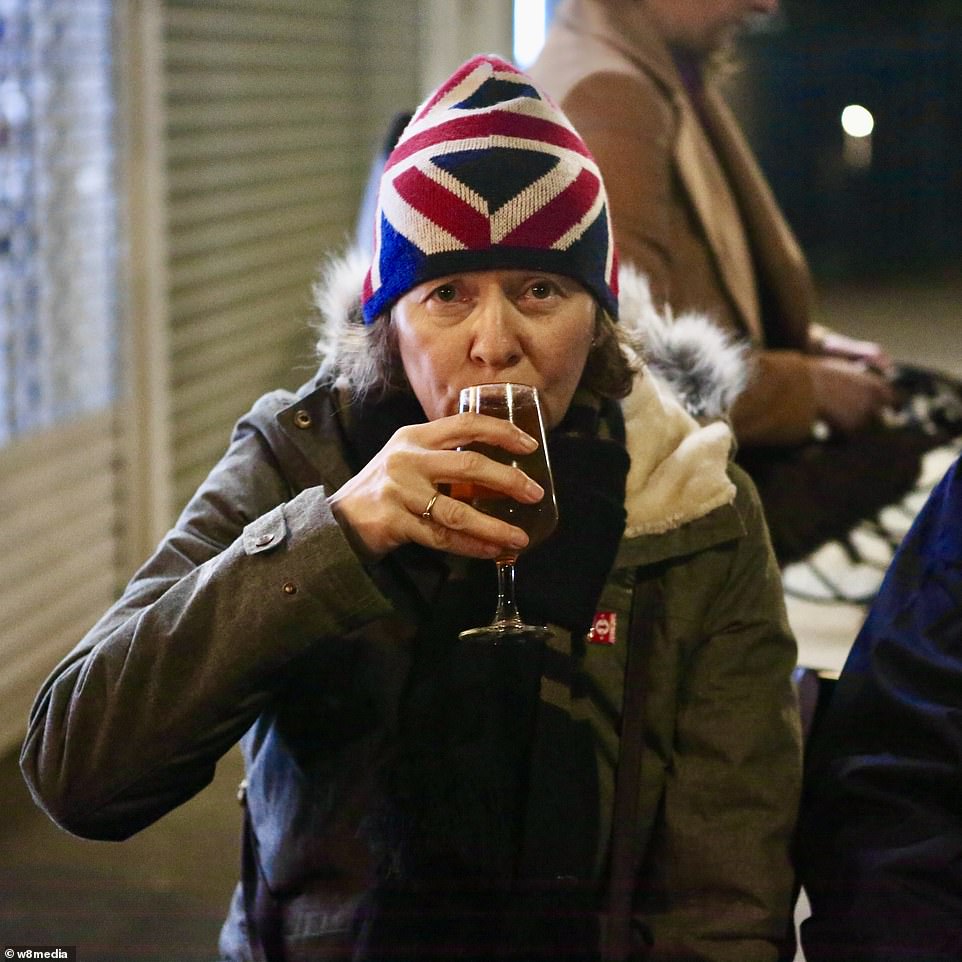 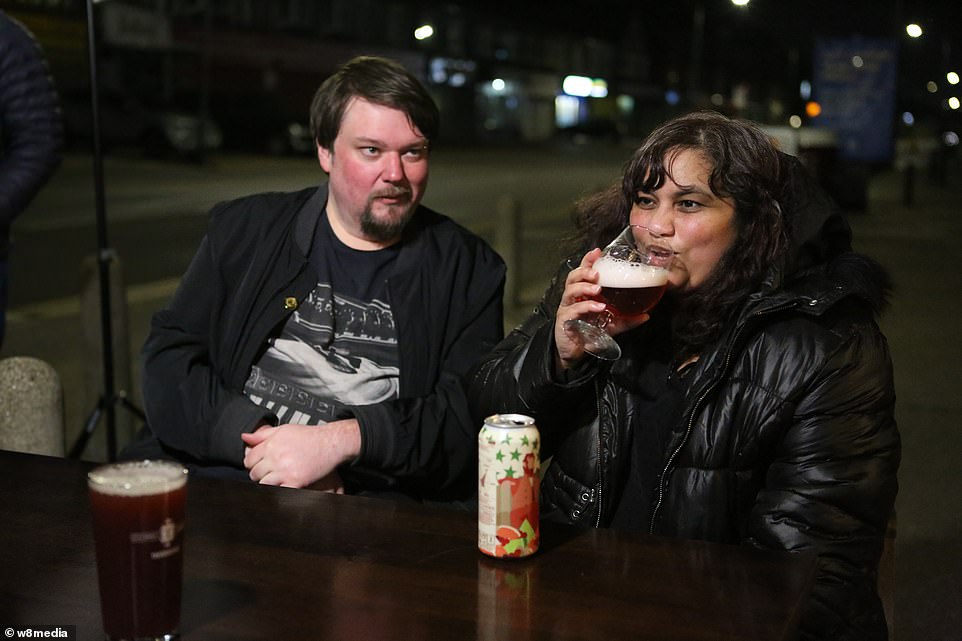 Despite it being a Sunday night, many people across the country headed straight to the pub the minute they reopened 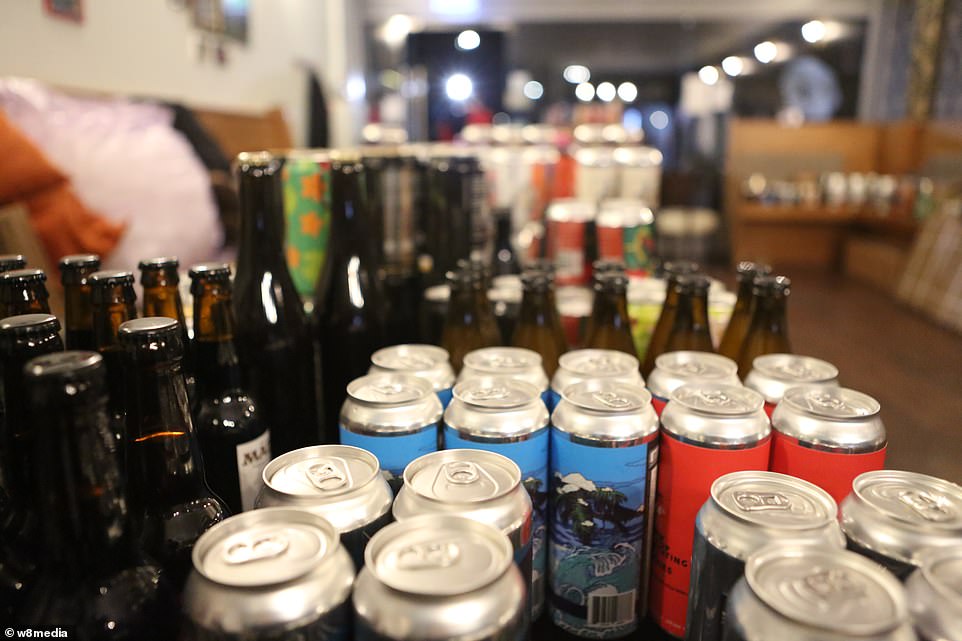 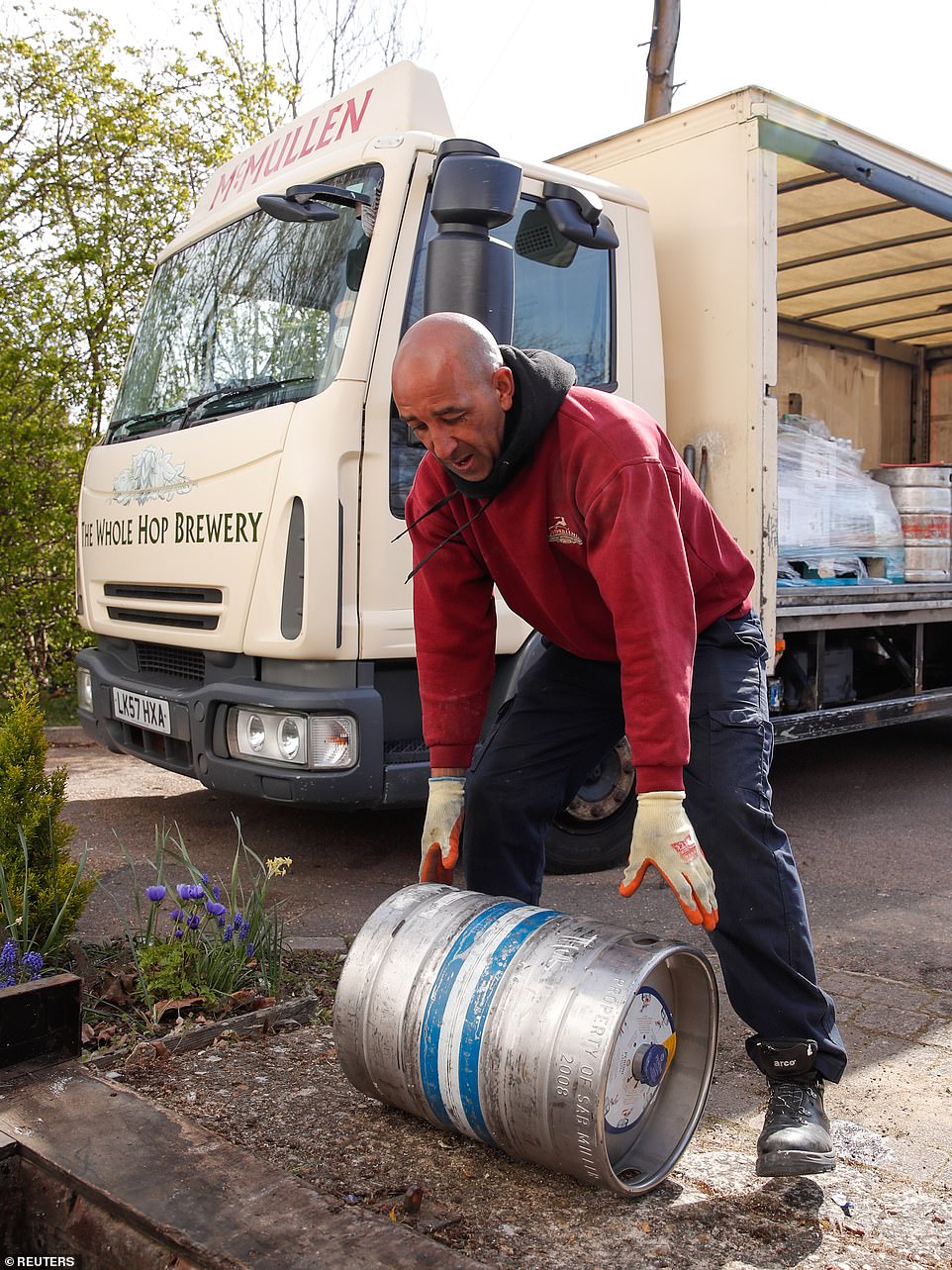 Pubs have been flooded with bookings, with the British Beer and Pub Association predicting the nation will get through 15million pints this week. A drayman is seen delivering a key to the White Horse pub in Hertford 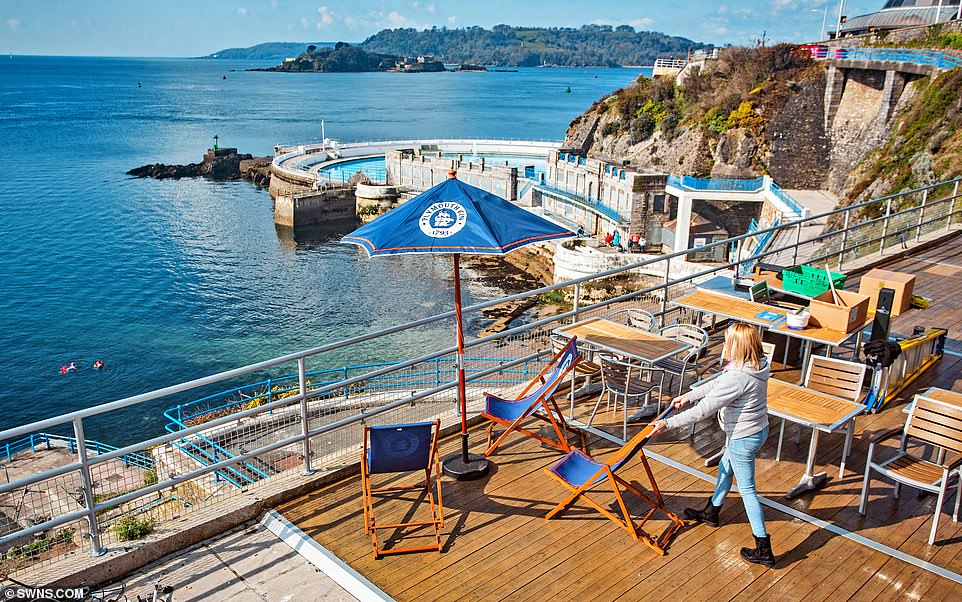 Lesleigh Mason prepares tables at The Terrace Cafe and Bar in Plymouth, Devon, ahead of the company’s reopening tomorrow

Boris Johnson last night urged Britons to ‘behave responsibly’ as they make the most of the new rules.

The Prime Minister hailed a ‘major step forward in our roadmap to freedom’ and an opportunity to ‘get back to doing some of the things we love and have missed’.

In his statement last night, Mr Johnson said: ‘Today is a major step forward in our roadmap to freedom as venues such as shops, hairdressers, nail salons, outdoor attractions, and pubs and restaurants open once again.

‘I’m sure it will be a huge relief for those business owners who have been closed for so long, and for everyone else it’s a chance to get back to doing some of the things we love and have missed.

‘I urge everyone to continue to behave responsibly and remember “hands, face, space and fresh air” to suppress Covid as we push on with our vaccination programme.’