All accused people to have faced judge-only trials in Victorian courts have been found not guilty on their major charge.

Six judge-alone trials have been completed since the Andrews government allowed the courts to operate without juries, and in every case judges have acquitted the accused on their most serious charge.

However, in three cases accused people were found guilty of a lesser, alternative charge.

The Supreme and County courts have been able to hold judge-only trials since July, after jury trials were suspended in March due to the coronavirus. Jury trials will return next month. 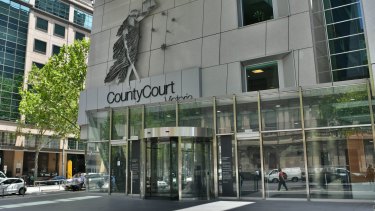 The County Court has been hearing judge-only trials.Credit:Vince Caligiuri

Based on data provided by the courts, an analysis of trials heard solely by judges shows a woman charged with incest, a woman on drugs charges and another person charged with gross indecency were all acquitted. Three other accused people – two of them this week – were also found not guilty of their most serious charge, but convicted on an alternative charge.

On Tuesday, Jackson Williams was found not guilty of intent to commit a sexual offence, after he dragged a woman into a Melbourne laneway in October 2018. County Court Judge Mandy Fox found there was a reasonable doubt over Williams' intent and instead found him guilty of common assault.

On Thursday, Ning Wang was found not guilty of murder, but guilty of manslaughter, after he fatally bashed sister Qin Wang and put her body in the boot of his car in Clayton South in February last year.

Despite evidence of a grievance Wang had towards his siblings, Supreme Court Justice Rita Incerti found there was a reasonable doubt over the prosecution's case he intended to kill his sister.

Jackson and Wang are awaiting sentence.

The small number of judge-only trials means it is too early to provide a definitive sample on verdicts, however lawyers have previously told The Age they believed appearing before a jury carried less risk for an accused person, and more chance of an acquittal, than before a judge alone.

Accused people who opt for a judge to decide their trial can jump to the front of the queue in a system weighed down by hundreds of delayed cases.

But despite that and the early run of acquittals on the more serious charges, Jacqui Horan, an associate professor of law at Monash University, expected most people would opt for a jury trial.

She said juries of 12 brought diversity to the decision-making process, and although some accused might want their cases heard sooner, she expected most would wait so they could front a jury.

Mark*, the complainant in one judge-only trial, can only wish he had the chance to wait for a jury.

His former stepmother was twice previously found guilty of incest over allegations she abused him in the 1980s, but on both occasions the convictions were quashed by the Court of Appeal, which ordered retrials.

The woman this year successfully applied for a judge to decide the retrial and a County County judge last month found her not guilty of all charges.

Prosecutors wanted the case heard by a jury and argued the trial involved questions of community standards and witness credibility best decided by jurors.

Mark said he supported the prosecutors' preference for a jury trial.

"I wanted to wait because we had good results with the jury the two other times and I thought, 'It's been 10 years [since he first raised the allegations] so what's another year or two'," he said.

Mark gave evidence in person at the first two trials but in this year's retrial the judge watched recordings of his evidence. He recalled that in the earlier trials he felt positive after seeing jurors react to his evidence.

"One hundred per cent. You could see them squirming in their seats some of the stuff I was saying," he said.

Upset his former stepmother was ultimately acquitted, Mark said he felt vindicated by the verdicts from the first two trials and was at least glad the process was over.

* Not his real name

Our weekly newsletter delivers expert analysis of the race to the White House from our US correspondent Matthew Knott. Sign up for The Sydney Morning Herald‘s newsletter here, The Age‘s here, Brisbane Times‘ here and WAtoday‘s here.