KAMALA Harris has been mocked for extreme social distancing after she sat on the opposite side of the room to CNN host Dana Bash during an interview on Sunday – despite both of them having been vaccinated.

Appearing on State of the Union yesterday, Harris addressed the border crisis and said it's something that can't be "solved overnight" while sitting around 12-feet away from Bash. 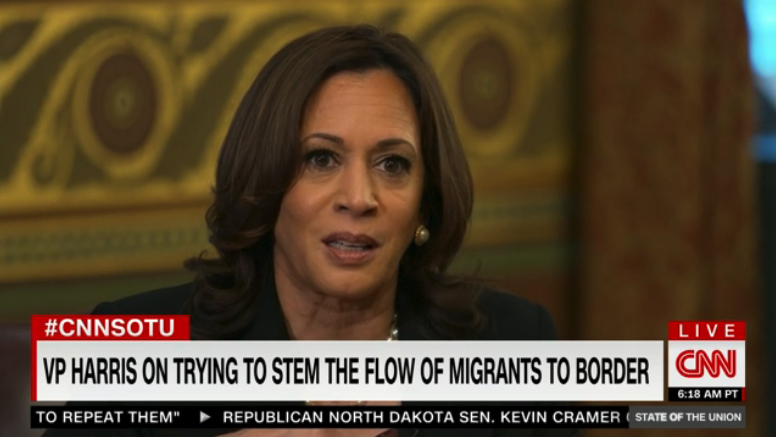 The comically large distance between the Vice President and the host didn't go unmissed on social media and elicited a flurry of angered reactions and amusing commentary.

"Grab some popcorn, it's all theatre," user Kylee Richarson also chimed in.

Many also took issue with the "unnecessary" and excessive distance between the pair because both Harris and Bash have both been fully vaccinated.

In response, user KC Holliday said: "Given how unnecessary this is, we can only assume that the Democrats have something to gain by keeping people unreasonably anxious and afraid of Covid. Why else would they insist on adopting this kind of theater and making it part of the Democratic brand?"

Last month, the CDC announced that fully vaccinated Americans could begin to gather indoors with other fully inoculated people without masks.

The government agency also said that vaccinated people can gather indoors with unvaccinated individuals who are considered low-risk for severe COVID-19 infection.

Furthermore, researchers at the Massachusetts Institute of Technology (MIT) said over the weekend that people who maintain a distance of 60 feet from others indoors are no more protected than if they socially distanced by six feet.

But still, Harris and Bash found themselves talking at a distance of around 12 feet apart.

"Sitting that far apart, why don't they just use Zoom?" one user asked.

"Isn’t the new CDC standard that fully vaccinated people be at least 18 feet apart?" another quizzed.

Others were quick to defend Harris, insisting she was "setting an example" and asking "what does it hurt?"

"Thank you for setting an example VP Harris. This is leadership," tweeted Brian Corcoran.

Harris has found herself in the firing line of Republicans in recent weeks for her failure to visit the US-Mexico border or holding a press conference about the migrant crisis since being designated as Biden's point-person on the matter.

The White House has since emphasized Harris' role is to tackle the root causes of migration, and she will instead be meeting with leaders of Latin Countries to ease the influx of asylum seekers.

"But it's not going to be solved overnight. It's a complex issue. Listen, if this were easy, it would have been handled years ago."

She continued: "Part of the problem is that under the previous administration, they pulled out essentially a lot of what had been the continuum of work, and it essentially came to a standstill."

Harris said she's focused on working with officials to give migrants "some sense of hope that, if they stay, that help is on the way."

"Most people don't want to leave home, and when they do, it's usually for one of two reasons. They're fleeing some harm or they cannot stay and satisfy the basic necessities of life, such as feeding their children and having a roof over their head," She said.

"That is a big part of what is going on. So I look at the issue of what's going on in the northern triangle from that perspective."