EXCLUSIVE: A wistful smile and a flower in her hair, this is the Kansas woman – once known as an ‘intelligent and caring’ student who loved science and photography – decades before joining ISIS and leading an all-female battalion in Syria

The Kansas woman charged with joining the Islamic State group and leading an all-female battalion in Syria was once known as an ‘intelligent’ and ‘caring’ student who loved science and photography and had hopes of becoming a school teacher, DailyMail.com has learned.

Allison Fluke-Ekren, 42, of Topeka, is accused of providing and conspiring to provide material support to ISIS after joining the terrorist organization overseas in 2014, prosecutors say.

Authorities released a booking photo following her arrest Friday, in which she was seen wearing a black hijab, and revealed she was known to go by the names, Umm Mohammed al-Amriki, Umm Mohammed, and Umm Jabril.

Photos from her family blog also showed Fluke-Ekren in Islamic dress alongside her second husband Volkan Ekren and young children in the years after they left the US for Egypt in 2008.

But former friends and acquaintances have told DailyMail.com the radicalized woman pictured in the photos and now charged with such horrific crimes is a far cry from the ‘intelligent’ and ‘mature’ young girl — then known as Allison Brooks — they knew growing up in rural Topeka. 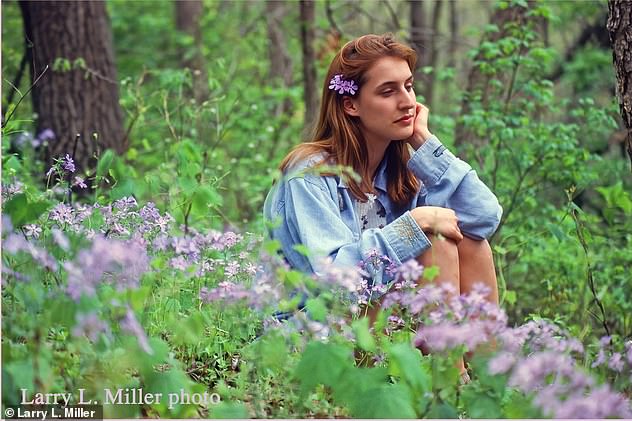 A young Fluke-Ekren poses with a flower tucked behind her ear in a field near Topeka, in a photo taken during Miller’s outdoor photography class in the mid-1990s 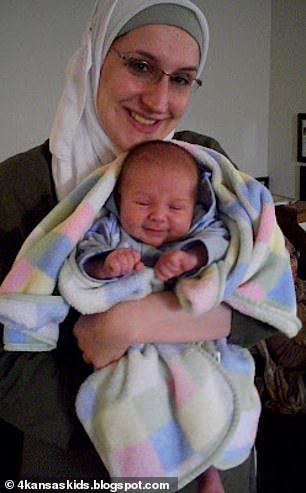 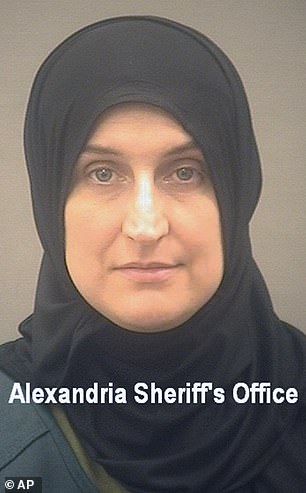 The 42-year-old Kansas women is charged with providing material support to ISIS after allegedly joining the terrorist organization in Syria in 2014. She is pictured right in an undated booking photo wearing a black hijab

Former school teacher-turned-friend, Larry Miller, shared memories of Fluke-Ekren as a teenager and later as a young woman, revealing that she was a stellar student at Topeka Collegiate in the early 1990s, had a keen interest in science, photography and nature, and wanted to become a teacher herself.

Smiling and posing with a lizard, wide-eyed and innocent Fluke-Ekren is seen in a photo Miller shared with DailyMail.com, working on a science project in junior high,  decades before she would become the leader of an Islamic terrorist group.

‘This photo was taken when she was with me and a number of other students and adults on a herpetological research project when she was in probably the eighth grade,’ Miller told DailyMail.com Wednesday.

‘She loved nature and she loved learning about nature. She had caught this adult Great Plains skink and was showing it to others when I took the photo.’

Another picture shows young Fluke-Ekren with a flower tucked behind her ear while posing in a field near Topeka.

The photo was taken during an outdoor photography class that focused on nature and wildlife photography, as well as how to use natural settings for outdoor portraits, said Miller, who taught the course in the 1990s with the help of Fluke-Ekren.

Miller said the photos represent the smart and enthusiastic Allison he and many of her old friends in Kansas remember, and that he is shocked as to how his former student ended up leading a life as a terrorist in adulthood.

‘I have no doubt that what is now in the news around the world is true of her,’ the former teacher said. 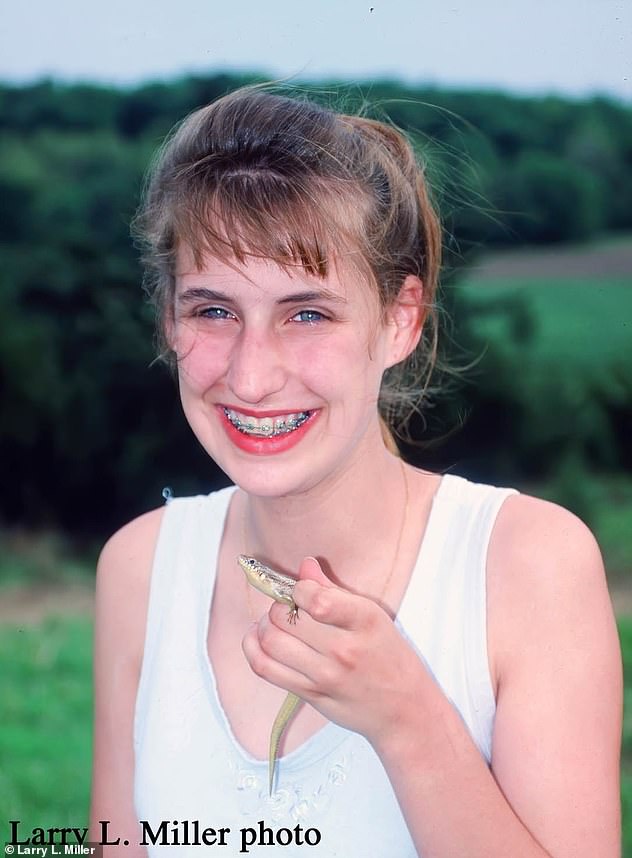 A photo shared with DailyMail.com shows smiling and innocent Allison Brooks working on a science project in junior high – decades before, as Allison Fluke-Ekren, she would become an alleged  leader of an Islamic terrorist group 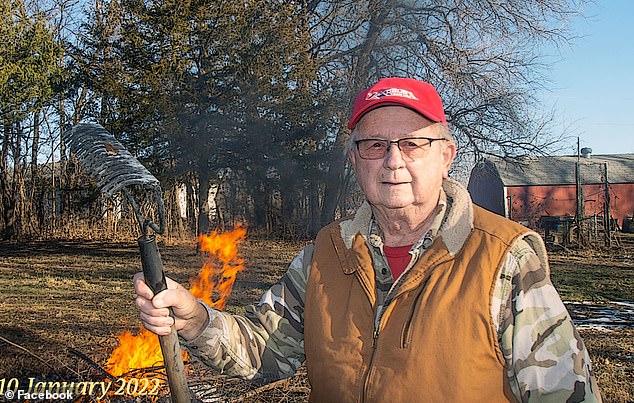 Larry Miller, Fluke-Ekren’s former teacher, said he remembers her as an ‘intelligent and caring’ student who loved science and photography at Topeka Collegiate in the early 1990s

‘I do not understand, however, just how intelligent and caring people like Allison and others end up being so brainwashed to want to harm and kill others that in most cases, usually all cases, have done nothing to deserve any type of violence toward them.

‘Maybe I am just an old man that grew up in a time when this type of thing, even though I know it existed in some areas, was not what it is now.’

Miller told local news station KSNT that Fluke-Ekren seemed ‘so mature for a seventh-grader’ and ‘like someone who had it all together.’

He said he was ‘probably as shocked about anything as I’ve ever been — and I’ve had some pretty weird things happen to. me in my life.’

Miller told The Capital Journal ‘Never would any of us who knew her back then ever thought she would end up as she has today.’

He said the two kept in touch over the years, and that Fluke-Ekren even hired Miller to be her wedding photographer.

In 2008 Fluke-Ekren sent him an email, writing to him that she was happily married with four children, and that she was pursuing a Master’s degree in teaching in Indiana.

Some time after that, she reached out to Miller again, asking him if he knew of any teaching positions in Kansas.

Fluke-Ekren moved to Egypt in 2008 and traveled frequently between Egypt and the US over the next three years. She announced the move in her final Facebook post dated May 5, 2008 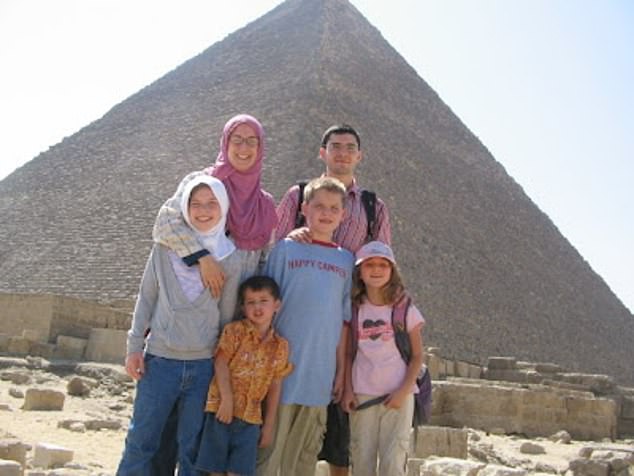 Photos from a family blog show Fluke-Ekren with second husband Volkan Ekren and her children, posing at the base of the pyramids in Egypt 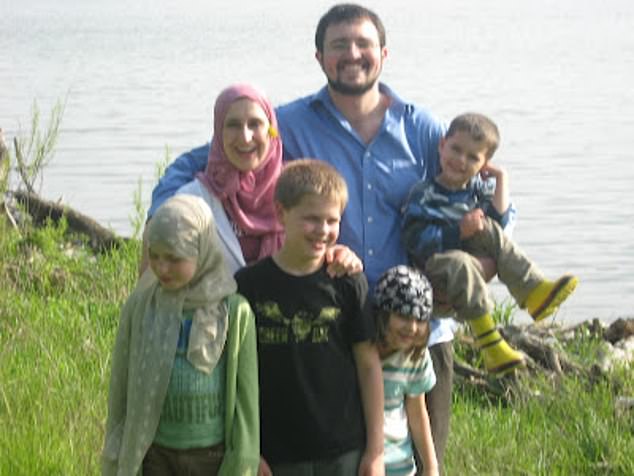 Prosecutors say Fluke-Ekren (pictured with her second husband and family) wanted to recruit operatives to attack a college campus in the U.S. and discussed a terrorist attack on a shopping mall

Miller said he told her of one job opportunity, to which she applied and was hired, but instead she moved with her second husband and children to Egypt.

A former friend identified only as Farouk also told ABC News the Fluke-Ekren was ‘highly intelligent’ and described her as a ‘marksman’ who ‘fantasized’ about an attack on the US and who ‘liked being in charge.’

Fluke-Ekren made an initial appearance on Monday afternoon in U.S. District Court in Alexandria, Virginia.

The hearing lasted only minutes; she was ordered to remain in jail pending a detention hearing set for Thursday afternoon, and an attorney was appointed to represent her.

At the end of the hearing, though, First Assistant US Attorney Raj Parekh told the judge that he had been in contact with Fluke-Ekren’s parents and her adult children, and all had said they wanted no contact with her.

The magistrate judge, Ivan Davis, said he had little ability to keep her from reaching out to her family from jail, but told Fluke-Ekren he would take it into account at Thursday’s hearing if she contacted her family against their wishes.

Fluke-Ekren, speaking in a soft-spoken voice and wearing an inmate jumpsuit and headscarf, said she understood the restriction. She also told the judge, in response to his question, that she preferred to be addressed as Ekren.

According to court papers, Fluke-Ekren moved to Egypt in 2008 and traveled frequently between Egypt and the US over the next three years.

Fluke-Ekren’s final Facebook post, dated May 5, 2008, reads: ‘Moving to Egypt. I’m a little behind the curve, but trying to learn how to use Facebook. =-) Well, after years of planning and preparing, we are moving out of the States. We’ll be in Cairo, Egypt, insha’Allah. I am teaching kindergarten, and my husband will be going to Al Azhar [University]. The kids are excited, but nervous, as am I. Any prayers would be greatly appreciated!’

She has not been in the US since 2011. Prosecutors believe she moved to Syria around 2012. 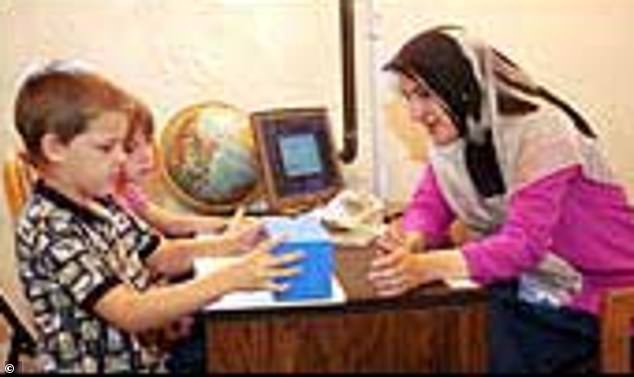 Fluke-Ekren, a teacher, home-schooled her two children Gabriel and Alaina Fluke in her house in Kansas 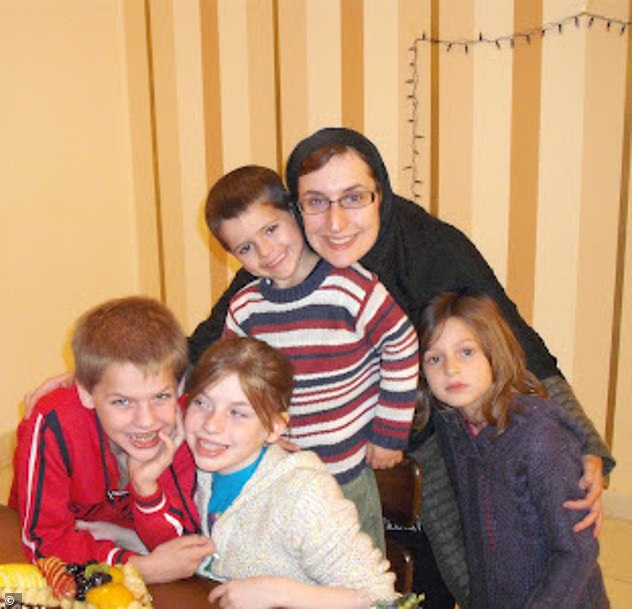 In early 2016, her husband was killed in the Syrian city of Tell Abyad while trying to carry out a terrorist attack, prosecutors said. Later that year, prosecutors say she married a Bangladeshi ISIS member who specialized in drones, but he died in late 2016 or early 2017.

Four months after that man’s death, she again remarried a prominent Islamic state leader who was responsible for the Islamic State group’s defense of Raqqa.

She told one witness in 2018 that she instructed a person in Syria to tell Fluke-Ekren’s family she was dead so the U.S. government would not try to find her, according to Parekh’s memo.

‘Fluke-Ekren informed this same witness and others that it was important to kill the kuffar (disbelievers) and die as martyrs on behalf of ISIS in Syria,’ the memo alleges. ‘The witness also heard Fluke-Ekren state that she never wanted to return to the United States and that she wanted to die in Syria as a martyr.’

Photos from a family blog show her and her children in the years they traveled between Kansas and Egypt, posing at the base of the pyramids in Egypt and playing in the snow in the US.

A 2004 article about homeschooling in the Lawrence Journal-World featured Fluke-Ekren and her children. She told the paper she pulled her kids from public school because she was dissatisfied with how her children were performing in public and private schools. Homeschooling allowed her to teach Arabic to her kids. 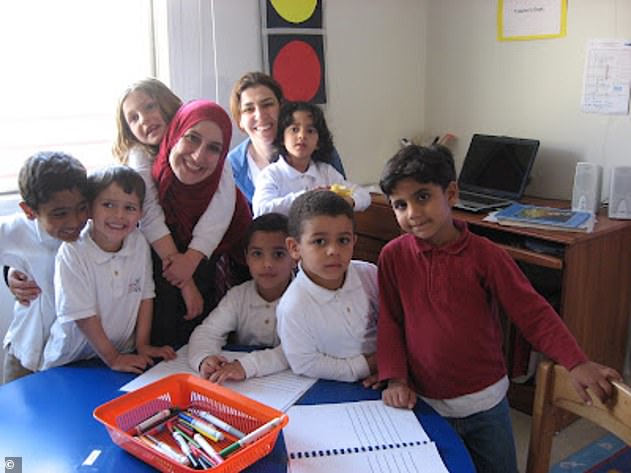 Four months after her husbands’ death, Fluke-Ekren remarried a prominent Islamic state leader who was responsible for the Islamic State group’s defense of Raqqa

Prosecutors say Fluke-Ekren wanted to recruit operatives to attack a college campus in the US and discussed the idea of attacking a shopping mall by remotely detonating a car full of explosives in the parking garage.

She told one witness that ‘she considered any attack that did not kill a large number of individuals to be a waste of resources,’ according to an FBI affidavit.

The same witness said that when Fluke-Ekren would hear about terrorist attacks taking place in countries outside the US, she would comment that she wished the attack occurred on American soil instead.

She is alleged to have led an all-female unit comprised of the wives of male ISIS fighters was trained in the use of AK-47 rifles, grenades and suicide belts.

The members of Khatiba Nusaybah were allegedly instructed on physical training, medical training, Vehicle-Borne Improvised Explosive Device driving courses, religious classes and how to pack and prepare a ‘go bag’ with military supplies. According to eyewitness accounts, some of these classes were taught by Fluke-Ekren.

One witness allegedly observed that the leaders of ISIS and the other members of the military battalion were proud to have an American instructor.

A detention memo stated that Fluke-Ekren trained children how to use assault rifles, and that at least one witness saw one of Fluke-Ekren’s children, approximately 5 or 6 years old, holding a machine gun in the family’s home in Syria.

In all, the affidavit cites observations from six different witnesses, including some who have been charged with terrorism offenses and some who were held at prison camps for former Islamic state members.