Kanye West keeps it simple when it comes to his password.

The rapper joined President Donald Trump in the Oval Office on Thursday, and in front of the press pool launched into a nearly 30-minute diatribe about racism, employment and the benefits of mediation.

He also revealed his iPhone password when he went to show President Trump a photo of the hydrogen-powered plane his is working on with Apple on his device, quickly typing in ‘00000).’ 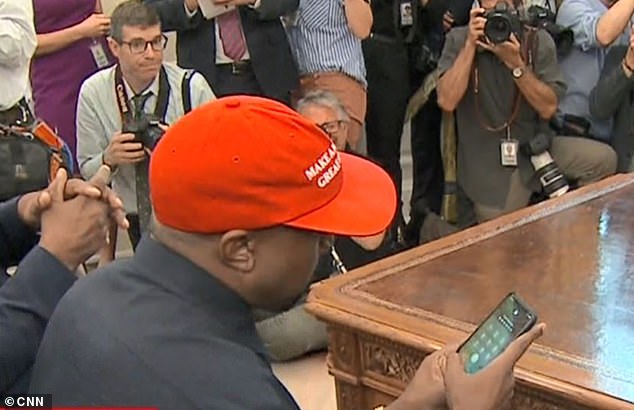 Keeping it 0: Kanye West revealed his iPhone password on Thursday in the Oval Office

It was just one of the many jaw-dropping moments to take place on Thursday,  with West also surprising those in attendance when he dropped the words ‘bulls***’ and ‘motherf***er’ during the meeting, which was being broadcast live on a number of networks.

West spoke about American industry and the need to bring back jobs at one point, while wearing a pair of $295 boots from his Yeezy line that are made in China and Italy.

‘They tried to scare me to not wear this hat, my own friends, but this hat it gives me, it gives me power,’ explained West. 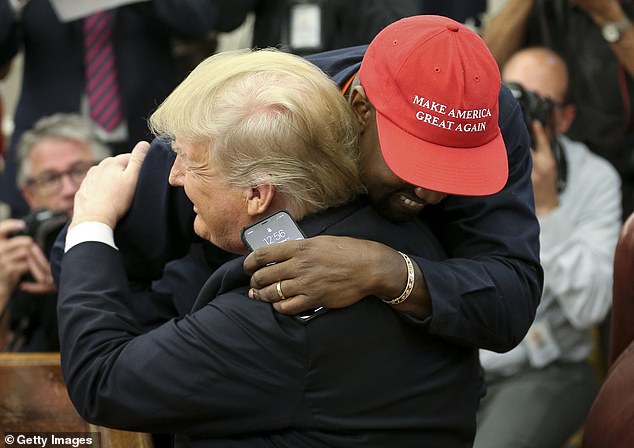 West even fielded a few questions, and spoke about his unorthodox approach to interviews.

‘I don’t answer questions in simple sound bites. You are tasting a fine wine. It has multiple notes to it,’ explained West to the crowd of reporters and videographers.

Also on hand for the meeting was a mostly quiet Jim Brown and Jared Kushner, who sat while his wife Ivanka stood behind him amidst the reporters.

It was unclear if Kushner had not offered his seat of Ivanka prefered to stand in her outfit.

On the topic of women, West also spoke about how Hillary Clinton’s campaign slogan did not empower him during the meeting.

‘I love Hillary. I love everyone, right? But the campaign “I’m with her” just didn’t make me feel, as a guy that didn’t get to see my dad all the time, like a guy that could play catch with his son,’ said West.

‘It was something about, when I put this hat on, it made me feel like Superman. That’s my favorite super hero.’