Kate Garraway asked a guest to put away a puppet that was likened to a black and white minstrel as she felt ‘uncomfortable’ having it on Good Morning Britain.

Children’s entertainer Brian Llewellyn appeared on the programme to defend traditional Punch and Judy puppet shows, which have been criticised for promoting violence.

In the midst of the heated discussion, Garraway became increasingly bothered by one of Mr Llewellyn’s puppets that had a dark face, white eyes and lips. 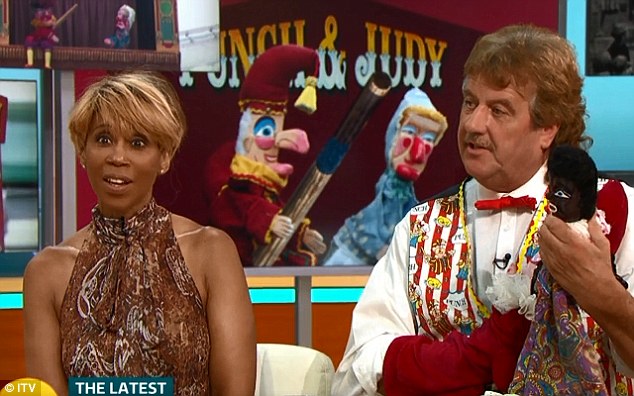 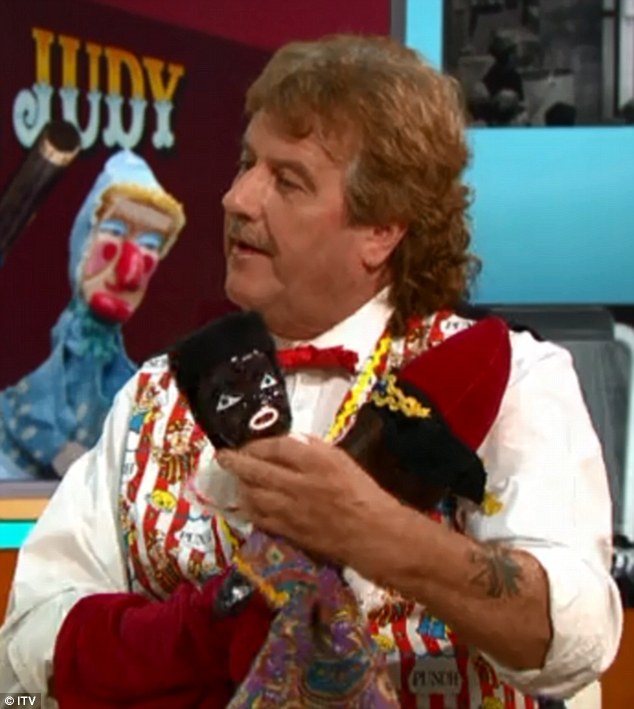 Holding up the puppet, with dark face, white eyes and lips, Mr Llewellyn said: ‘This has been the character since 1662’

Mr Llewellyn explained the puppet ‘has been the character since 1662.’

TV presenter Trisha Goddard, who was also a guest on the segment, replied: ‘So were the black and white minstrels.

Mr Llewellyn shot back: ‘You say it’s a minstrel, I say it’s a black singer.’

Goddard then asked: ‘Why has he got white around his mouth? Why don’t you take that away?’

Mr Llewellyn attempted to explain, saying: ‘It’s like, why does Mr Punch have a red nose? It was just the paint…’

Garraway jumped in and said the black puppet was was ‘offensive to many people,’ adding it was a waste of time explaining the history of the argument, ‘which we now feel is racist’.

Mr Llewellyn said that ‘it’s only this last couple of weeks that this has actually been mentioned’ to him.

Garraway cut him off and said: ‘Can I just say, Brian, it’s actually making me feel slightly uncomfortable, you having it there. If you don’t mind putting it down?’

She added: ‘I don’t think it’s right that we should have it on the show.’

Mr Llewellyn set the puppet down said he’ll be ‘painting his lips differently’ from now on. 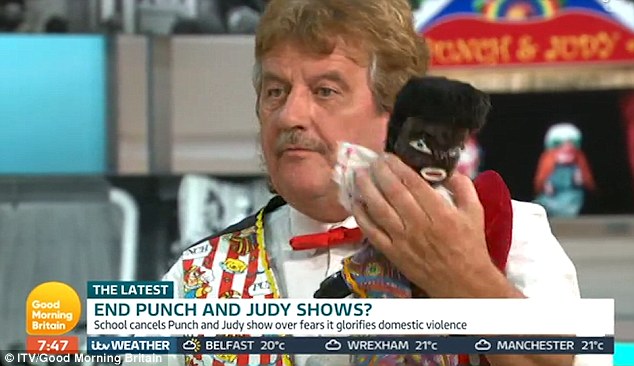 The Punch and Judy doll discussion saw the entertainer, who was recently asked by a school remove the violence from his Punch and Judy performance, defending the long-standing British puppet show

However, some questioned why the show would let Mr Llewellyn on in the first place with the offensive puppet

However, some questioned why GMB would let Mr Llewellyn on the stage in the first place with the controversial puppet.

Twitter user Vicky said: ‘That guy walked on with them puppets before it went live on air why didn’t Kate say something then if she was that offended…’

Many people took to Twitter to defend Mr Llewellyn over the black puppet and criticised the hosts for being over sensitive.

It is not clear if they understood that the doll appeared to be in blackface, which was what the hosts were objecting to and not that Mr Llewellyn had a black puppet. 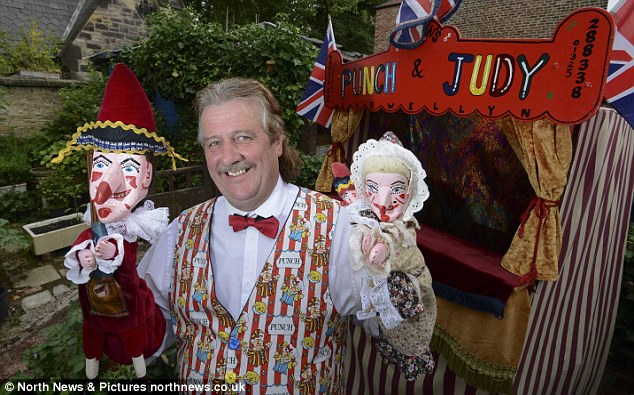 Brian Llewellyn, 64, was asked to ensure that Punch did not hit Judy – even though that is a key element of the show 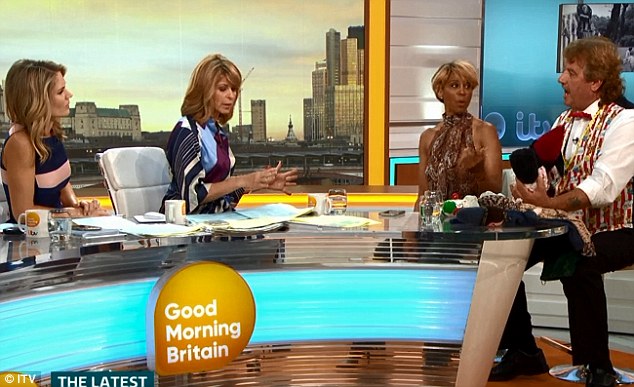 Goddard: ‘Why has he got white around his mouth? Why don’t you take that away?’

The Punch and Judy doll discussion saw the entertainer, who was recently asked by a school remove the violence from his Punch and Judy performance, defending the long-standing British puppet show.

He was also asked to scrap a recent performance because it was due to take place next to a women’s refuge.

Mr Llewellyn told the programme: ‘People are reading too much into it.

‘Yes, Mr Punch hits Judy, I’m not getting away from that, and he hits the baby, but it’s puppets, it’s a silly little puppet show.

‘If anyone has watched this programme from the start this morning, you’ve seen two clips, 15 seconds out of a 45-minute show.’

Goddard said she thinks the show should be adapted, and have the part where Mr Punch hits Judy, his wife, removed from the storyline.

‘If schools deem it unacceptable… and bigger organisations feel uncomfortable with it for whatever reason, there is going to be a squeeze on this,’ she said.