You will find Kawi, the latest Momofuku restaurant, on the fifth floor of 20 Hudson Yards, assuming you stay determined and swallow back the urge to run for the exits that may grip you as you negotiate escalators that don’t connect to one another, elevators that are hidden out of sight like somebody’s crazy grandfather and shiny retail windows that seem to be trying to provoke a class war.

By the time people reach Kawi they tend to look rattled; New Yorkers who will easily weave their way around broken sidewalks, potholes, garbage piles and al fresco rat conventions come undone when faced with the interior of a shopping mall.

Kawi, now two months old, can be disorienting in its own way, but at least you can have a seat and a drink while you get your bearings. Space there is used, or not used, the way it is in Las Vegas. There’s a very long bar behind a line of black, geometric bar stools receding toward the vanishing point; low lounge tables; taller, square wood tables; round wood tables; black-leather booths; red-leather booths; red-leather banquettes; and a row of chairs facing a kitchen counter. Between all this furniture are aisles wide enough for a Zamboni. 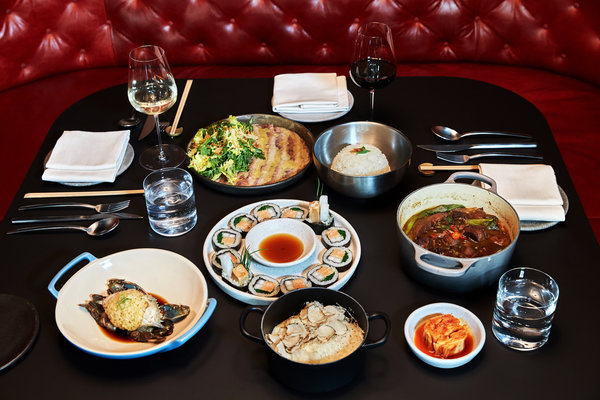 All those seats have backs, too. Kawi is loaded with the comforts and accommodations that critics, including me, were begging Mr. Chang to pay more attention to as recently as the opening of Nishi three years ago. Has anybody complained before that a David Chang restaurant was too quiet? They’re saying it about Kawi. If there is anybody left who still thinks of Mr. Chang as a downtown punk, Kawi will clear up that misconception. The early Momofuku restaurants were skateboards; Kawi is a minivan with sliding doors, armrests, cupholders and Don Henley on the stereo. The ride may not be as fast, but it’s a lot smoother.

Kawi is also the first Momofuku restaurant in New York to address Korean cuisine head on and at length. Majordomo, which opened in Los Angeles last year, is at least half Korean, but the menu is loaded up with other stuff, a lot of which is big and showy and seemingly designed to dazzle the high rollers. It can be hard to remember you’re eating galbi-jjim after a server buries it beneath a tableside avalanche of shaved raclette.

Eunjo Park, Kawi’s executive chef, avoids this type of distraction. This is lucky, because she makes food that you want to concentrate on. Before joining the Momofuku stable, she worked in the formal and highly fastidious kitchens of Daniel, Le Bec-Fin and Per Se. She later returned to South Korea, where she had lived until she was 12, for advanced studies at the Seoul restaurant Gaon and at the kitchen of the Chunjinam hermitage, presided over by Jeong Kwan, certainly the most celebrated cooking Zen nun in her country.

A strong interest in tradition marks Ms. Park’s food at Kawi. Her dishes are set apart from versions you may have had before by the exactitude of the technique and the quality of the ingredients. One section of her menu is turned over to kimbap, those wide, nori-wrapped sushi rolls often spotted at salad bars, languishing under plastic wrap.

Most kimbap is designed to be portable, filling and inexpensive. Ms. Park’s kimbap, on the other hand, is built for pleasure. She has a pickled vegetable kimbap on the lunch menu that is truly exciting; you are meant to dip it in a dark liquid that tastes a bit like soy sauce but is made with beets. The dinner menu brings kimbap filled with chives, pickled daikon, citrus jelly and a buttery pink vein of foie gras terrine. Has this really never been done before, you wonder as you eat it, and if not, why not?

Among the other gussied-up raw fish that you expect in Momofukuland, like a refreshing if somewhat staid madai tartare, are some dime-size clams in chile sauce and an elegant, inspired interpretation of gejang. Blue crab legs and claw are cracked and given a three-day soak in soy sauce, among other things, which gives them an impressive amount of flavor. Then, in case you haven’t noticed that you’re dealing with a real chef, Ms. Park stirs the crab’s roe with creamy rice and spoons this Korean risotto into the open belly of the shell.

At moments like this, or in the hwedupbap filled with raw fish as strikingly good as any you’ll find in a $200 omakase, or in the doenjang jjigae, a potful of braised fermented bean paste with pork belly that appears on the menu as “yesterday’s stinky soybean stew” and manages to be homespun and polished at the same time, it’s possible to see Kawi as Ms. Park’s response to Atomix. It’s as if she had looked at Junghyun Park’s dazzlingly complex compositions at his year-old modern Korean restaurant and decided that she could cook in a style that was every bit as modern and painstaking, but that instead of turning traditional dishes into tasting-menu food she would keep the old forms and innovate inside them.

With her tidy, refined, French-influenced neo-traditionalism, Ms. Park could become something like the Alain Ducasse of Korean cooking. It’s not obvious, though, that Kawi needs an Alain Ducasse. Certain appetizers seem to belong on another planet, more beautiful and gentle than ours, such as the soft tofu with soy syrup that, sitting under a shattering thin crust of caramelized sugar, is like a savory crème brûlée by way of Seoul. And there are others, such as the sticks of fried cod that a server pointlessly snips in half with scissors and then spritzes with atomized yuzu juice, that are right at home at Hudson Yards.

The presentation seemed forced. That could also describe the boiled chicken dish, one of the menu’s showiest items and, at $64, one of its most expensive. The whole bird is steamed, then the breast is sliced and served plain while the dark meat is fried and coated with spices. Neither is spectacular on its own, and the combination is bizarre.

More successful versions of elaborate, oversize, multicomponent dishes are proven moneymakers elsewhere in the Momofuku republic. But arm-waving platters like that seem out of place at Kawi, which is the least Momofukian of the Momofukus.

The most uncharacteristic thing of all is that the dining room has never been operating at anything close to capacity, at least when I’ve been there. Maybe tables are being kept off the reservation books to give the cooks time to learn where the spice cabinet is. Or maybe the fans who are so devoted to Mr. Chang’s downtown spots are still trying to figure out the escalators.

When you make a reservation at an independently reviewed restaurant through our site, we earn an affiliate commission.