Keep your hair on! War over award-winning self-portrait as artist pictured wrapped in long locks is removed from two shows after photographer hired to take image claims HE is its true creator

A British photographer has had her award-winning work withdrawn by an international show after another snapper claimed ownership of her self-portrait photo that features her covered in hair.

Clancy Gebler Davies, 55, from London, won a British Journal of Photography prize and had hoped her career would take off following two big award-winning shows.

It has now been withdrawn from two BJP shows, one in Miami and one in London.

Hersuit, featuring Ms Gebler Davies covered in hair with only her eyes visible, was made for the Royal Academy’s Summer Exhibition in 2018.

Following the annoucenment, William Corbett, 56, asserted in October to the British Journal of Photography that he pressed the click button to snap the photo on his camera, which he believes would make it not be eligible for the prize. 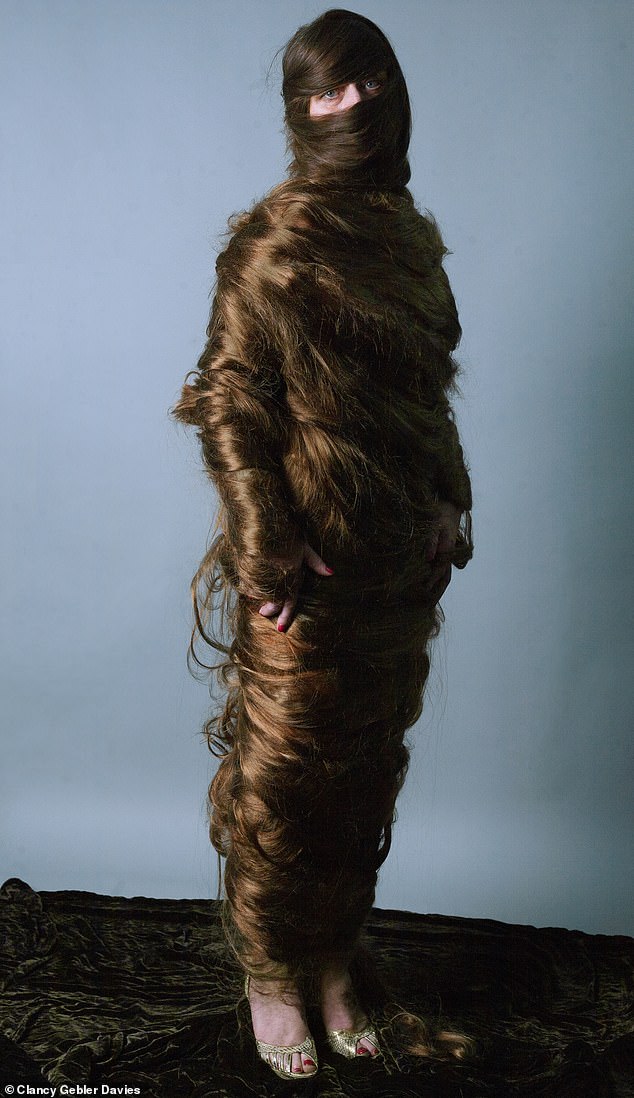 Mr Corbett also suggested that he planned the lighting, while Ms Gebler Davies says he was just a camera operator under her direction.

‘Pressing a shutter under someone else’s direction does not make him a photographer,’ she told the MailOnline. ‘I just don’t know what to say.

‘It has been really horrible.

‘Since October, it’s been like living in a zombie movie, having my reputation tarnished and I have had no support

‘They haven’t told me they have taken away my award but they’ve removed any reference to it.’

Ms Gebler Davies said she had given evidence countering his claims to the British Journal of Photography, including testimony from crew members and others present in the studio that day.

She added that the BJP’s Female in Focus Award was about ’empowering’ women and it is ‘ironic’ it’s been taken away ‘so easily’ by a man.

‘This kind of thing happens to women artists all the time,’ she added.

Ms Gebler Davies also claims she was asked on the phone by the British Journal of Photography if Mr Corbett ‘identifies as a woman’ as that would have made his claims justifiable.

The National Union of Journalists – of which Ms Gebler Davies is a member – wrote to Mr Corbett to ask him to either substantiate his claim or withdraw it.

He responded, saying: ‘See you in court.

‘I would also caution against using the NUJ for private matters and your schoolboy attempt at legalese gave us all a good laugh.’

The copyright is issue is believed to be the reason that the British Journal of Photography is understood to have concerns over the piece.

Maria Peyman, partner in UK law firm Birketts’ commercial litigation team, said if Mr Corbett only ‘pressed the shutter’ as Ms Gebler Davies claims, she would be ‘deemed’ the author of the work.

Ms Peyman added: ‘These issues have been raised before, in relation to a selfie taken by a macaque monkey, where the photographer argued that he was the owner and author of the photograph because he had manufactured the opportunity for the photograph to be taken.

‘Mr Corbett will need to have made a creative contribution to determine whether he has any claim to authorship which is, ultimately, a decision for the Courts. It will be crucial to evaluate the process up to and the taking of the photograph.’

The British Journal of Photography and Mr Corbett has been reached out for a comment by the MailOnline.