Beijing: Shaking hands with a long row of fawning cadres who bowed and scraped as he got off the plane from Singapore, Kim Jong-un may have looked a little bored as he walked the red carpet at Pyongyang's Terminal 1. 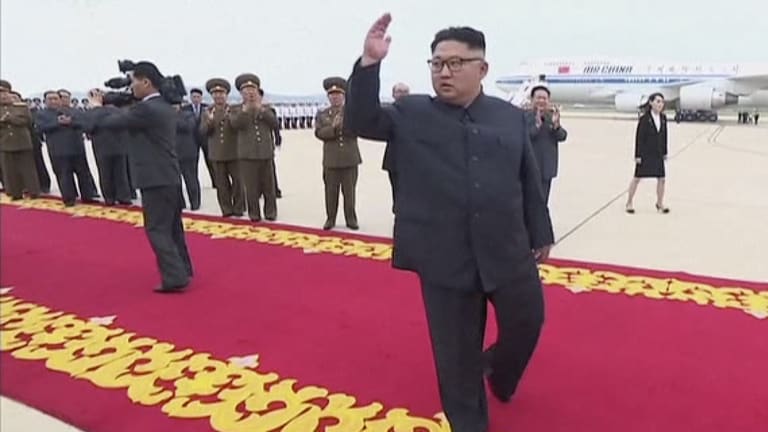 Kim Jong-un waves to hundreds of well-wishers as he returns to a grand red carpet homecoming this week.

The contrast is captured in a 45-minute North Korean propaganda video documenting Kim's experience at the Singapore Summit.

With soaring music, the narrated adventure shows a meeting of equals between Kim and US President Donald Trump. It lingers just a second too long on the glossy gold insignia – "President of the United States" – on the joint letter that declared North Korea would denuclearise.

The critics who tipped the dictator Kim would make propaganda mileage out of the historic first meeting with a US president were correct.

As Kim returned home, the language on the front page of official newspaper Rodong Sinmun could easily have been mistaken for Trump hyperbole: "Amid the great attention and excitement of mankind toward the epochal talks unprecedented in history which shocked the whole world … Kim ushered in a new phase of DPRK-US relations."

The White House website proclaimed: "A Tremendous Moment for the World." 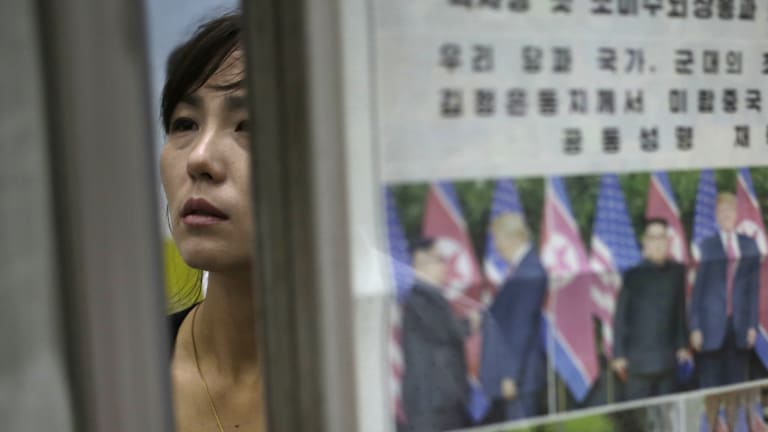 Trump faced criticism from a free press back home, who charged that the Singapore Summit had failed to produce concrete steps or even a path to verifiable denuclearisation by North Korea.

But it was acknowledged by world leaders that the made-for-TV event and four hours of direct talks between Trump and Kim had significantly reduced tensions and the risk of nuclear conflict. Both leaders had shown a willingness for North Korea to denuclearise in exchange for security guarantees from the US.

South Korean President Moon Jae-in, whose nation has everything riding on North Korea relinquishing its nuclear weapons, said: "A clear direction is set, but specific ways to realise the goal still remain a question."

The fine print in the letter signed at Singapore's Capella Hotel puts the onus on US Secretary of State Mike Pompeo to continue negotiations, as soon as next week, to bring forth the details missing from Kim and Trump's joint declaration.

Much will depend on whether Kim, having returned to the Hermit Kingdom with his propaganda coup and elevated standing on the world stage, maintains his apparent mood for change. Trump said Kim would start the process "as soon as he arrives", and a missile engine testing site would be dismantled soon.

Last November, a worm-riddled North Korean soldier was shot in the back five times as he defected in dramatic fashion, running across the heavily fortified border at Panmunjom. But two days ago, generals from North Korea and South Korea sat down for the first high-level military talks in a decade, and discussed how they could demilitarise Panmunjom. They will also restore military communication lines.

William Perry, the US defence secretary to Bill Clinton, pointed to the generals' meeting as "positive steps forward".

But Perry, who oversaw the 1994 deal with Kim's father to lift trade sanctions and allow inspectors into North Korea, also cautioned: "We must not be lulled into complacency by nice words – North Korea is ruthless and self-interested and the threat is real, the difficult work of denuclearisation is still ahead of us."

The world has been at this point twice before – a pledge for denuclearisation from the North Korean regime that never makes it through the hard yards, and which instead saw the expulsion of inspectors from the International Atomic Energy Agency.

However, North Korea watchers say Kim is more interested in the economic benefits that could flow from a deal to modernise North Korea than his father or grandfather were.

Kim's night tour on the eve of the summit took in premier tourism sites and the busy container freight port, showcasing the benefits of foreign investment if international sanctions on the cash-starved regime were lifted. 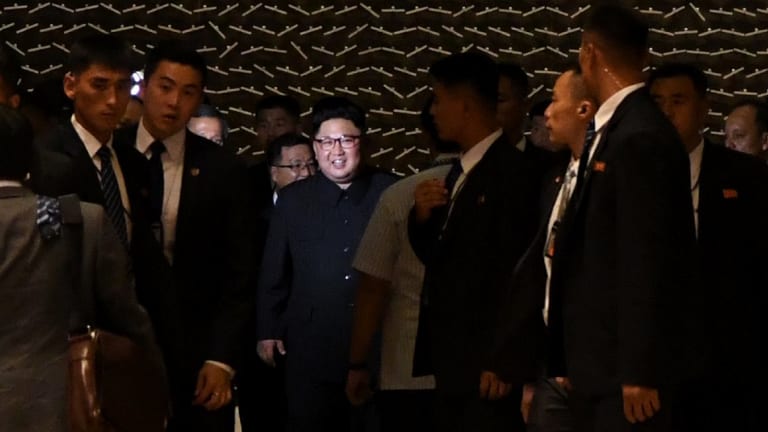 Kim arrives at the Marina Bay Sands in Singapore, his face lit by a camera making a propaganda film about his visit.

The dazzling night light display was duly transmitted back to the public of North Korea, where in much of the country the street lights turn off early to save power. North Koreans have already been officially told in recent weeks that the economy will become the prime national focus, because the nuclear weapons program is complete.

Ponsei University's John Delury argues the North Korean video of the summit was also a propaganda win for the US.

"It is propagating the message of making peace with the US and of making North Korea more like Singapore," he tweeted.

The carrot of investment from US allies such as Japan and South Korea (Trump quipped that they, not the US, would be footing the bill for denuclearisation) was also highlighted in Trump's own propaganda video, shown on his iPad to Kim, of a future North Korea with gleaming skylines and fast trains. Trump even pitched the real estate potential of North Korea's beaches.

But Kim has irrationally turned his back on investment in the past, including real estate deals.

The bridge to nowhere

The Chinese border town of Dandong is testament to this. Around 70 per cent of North Korea's trade with the world passed through Dandong before China clamped down, with strict enforcement of UN sanctions since November. And though apartment prices have soared there in recent months on the hope that sanctions will be lifted, a gleaming $US330 million suspension bridge across the Yalu River to North Korea stands as the white elephant in the room.

Known as "the bridge to nowhere", it has been unused since it was completed in 2015, with not even an off-ramp on the North Korean side, just fields. North Korea spurned the bridge, and the potential to link North Korea's economy to the world's second-largest economy via free trade zones and business parks constructed on the Chinese side at great expense. 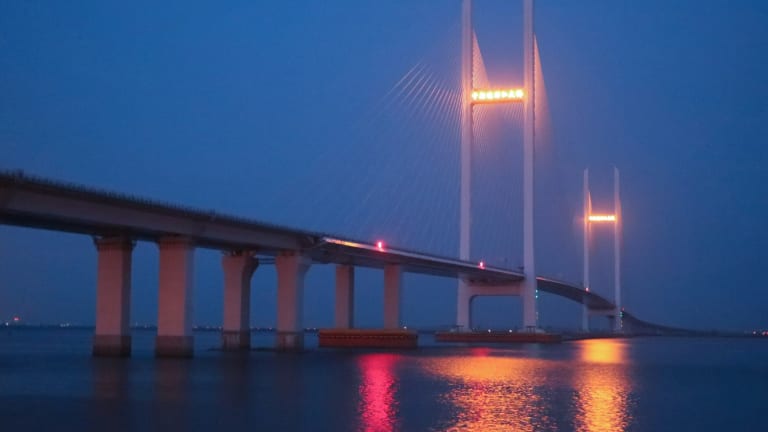 The new Dandong-Sinuiju bridge, which has never been used since it was built in 2015.

There remains strong scepticism that Kim will ever completely denuclearise under the terms demanded by the US.

Both the 1994 Agreed Framework and the 2005 Six-Party Talks explored normalising economic relations as a carrot if Kim's father, Kim Jong-il, took detailed steps to dismantle a weapons program that was far smaller than it is today.

Kim Jong-un has declared North Korea's nuclear weapons arsenal technologically completed and, having built a nuclear arsenal with the capability of reaching the United States, he will at the very least drive a hard bargain before relinquishing it.

Kim is presumably backed by Beijing, having visited President Xi Jinping twice, and Moscow, where it was announced on Thursday that he will visit Russian President Vladimir Putin in September, a month that marks the 70th anniversary of the founding of the Democratic People's Republic.

Andrei Lankov of Seoul's Kookmin University said expectations had been dashed that the summit would result in an agreement for nuclear inspectors to enter the country, or a commitment from North Korea to disable a plutonium-producing nuclear reactor or get rid of centrifuges used to enrich uranium.

"The North Koreans will never surrender their nuclear weapons, and it is strange that otherwise sane people have sometimes expressed doubts about this geopolitical fact," Lankov wrote.

"The DPRK elite sincerely believes that without nuclear weapons it is doomed."

Lankov says North Korea does seem prepared to talk about arms control and reduction, and had already made significant concessions by handing over US detainees and destroying a nuclear test tunnel. 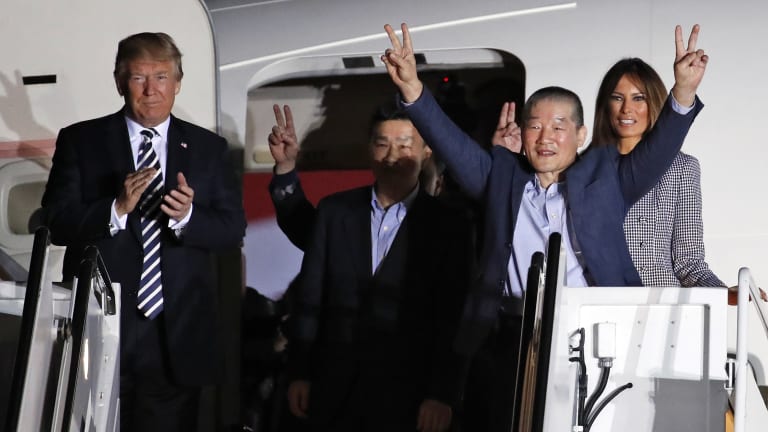 Donald Trump welcomes back three US prisoners released in May from detention in North Korea.

The only major concession on the day of the summit came from Trump, who agreed to North Korea's demand that "war games" between the US and South Korea end.

The incoming US ambassador to South Korea, former Pacific fleet commander Harry Harris, says he supported a "pause" in military exercises to test whether Kim is serious about negotiations.

Harris said denuclearisation had to include removal of equipment, equipment research and existing stockpiles.

William McKinney, a visiting scholar at the US-Korea Institute of Johns Hopkins University and a former policy official on Korea in the US Pacific Command, said Trump's offer was a move to reciprocate North Korea's earlier freeze on its nuclear tests and missile launches.

McKinney said the involvement of nuclear-capable B-1 bombers, F-22 fighters and ballistic missile submarines had indeed made the war games "highly provocative", so it was a reasonable measure to build trust with North Korea.

But he warned a "big stick" needed to be retained as the US entered negotiations with North Korea with eyes wide open.

Georgetown analyst Victor Cha, who was rejected by Trump as South Korea ambassador for not being hawkish enough, said meat needed to be put on the "flimsy bones" of the summit's declaration before the next scheduled military exercises, due in August.

Pompeo's first steps this week were to shore up support from South Korea, Japan and China for continued sanctions against North Korea until it "completely" denuclearises.

Meeting Moon in Seoul, Pompeo said denuclearisation should be completed by 2020, putting it within Trump's first term as president.

The speed of this timetable appears to be driven by pressure from North Korea and China for sanctions to be gradually lifted.

On Thursday in Beijing, where he met with Xi, Pompeo said China would honour UN Security Council resolutions on sanctions, which contain mechanisms for relief "at the appropriate time".

Hours after meeting Kim, Trump had said that about 20 per cent of the way through the denuclearisation process, weapons cannot be used. Sanctions would come off when nukes were "no longer a factor", he said.

True denuclearisation of North Korea's extensive arsenal would take more than a decade.

Cai Jian, executive director of the Korean Study Centre at China's Fudan University, says that in the short term North Korea is likely to dismantle its missile test field, but other measures will need to be discussed by the other countries involved.

He says any withdrawal of US troops from South Korea –  flagged by Trump as a possibility in the long-term – would cause protests in South Korea.

He doubts North Korea will accept the US demand for "irreversible" denuclearisation, which would entail moving North Korea's nuclear experts overseas.

"Denuclearisation at this stage means dismantlement of missiles and removal of some nuclear weapons. Its nuclear scientists can restore them at any time," said Cai.

But in the wake of the summit, there is plenty of optimism in the air.

China's Global Times newspaper was upbeat, saying in its editorial that if North Korean nuclear and missile tests had ended, there were no longer large US military exercises and the two Koreas and the US were holding high-level talks, "it is already a brand new peninsula".