Washington: US Secretary of State Mike Pompeo went to Pyongyang to get Kim Jong-un to give up his nuclear weapons. He left with a harsh reminder that the North Korean leader expects something in return.

While US President Donald Trump's point man for nuclear talks summed up his 27 hours in the North Korean capital as "productive," the regime called the visit "regretful." 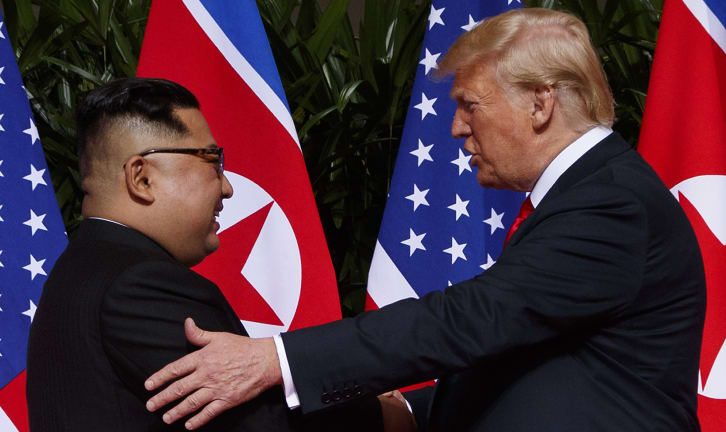 No sooner had Pompeo left that Kim's media published a statement saying the US' "unilateral and gangster-like demand for denuclearisation" risked upending ties less than a month after Trump and Kim shook hands in Singapore.

The next line of the more than 1200-word statement may have captured the central complaint: "The US side never mentioned the issue of establishing a peace regime on the Korean Peninsula, which is essential for defusing tension and preventing a war," an unidentified foreign ministry spokesman said.

The statement shows that Kim is willing to test Trump's patience and not bargain away his arsenal without sufficient security guarantees. The regime's belief that the weapons are needed to deter a US attack dates back nearly 70 years to the still-unresolved Korean War, and will take more than a handshake to dispel.

"The President and high-ranking officials have been talking about this very quick timeline and are focused on the nuclear issue only, and not on the broader situation," said Eric Gomez, a foreign policy analyst at the Cato Institute in Washington. "Realistically, the only way you get to a denuclearised North Korea is if it has a better relationship with the United States."

That's why the vague agreement Kim signed with Trump on June 12 called for establishing a new relationship and a "lasting and stable peace regime."

The pledge to "work toward complete denuclearisation of the Korean Peninsula" was listed third.

Practically, assuaging Kim's security fears could require risky choices for the US and its Asian allies, such as rolling back America's nuclear umbrella or pulling back its troops in South Korea. The desire for a broader security realignment explains why Kim agreed to "denuclearisation" and not disarmament.

Trump has already faced criticism for being too quick to make security concessions to Kim, including his unilateral suspension of military exercises with South Korea. The North Korean statement indicated such gestures hadn't gone far enough, saying the US moves were "highly reversible" and left its military force intact "without scraping even a rifle."

The statement included a personal appeal to the US President: "We still cherish our good faith in President Trump," it said.

"The administration should press on with talks and expect more stumbling blocks along the way, but it must be careful that nuclear talks aren't held hostage to peace talks."

Pompeo was under increased pressure to show progress after reports that Kim expanded his nuclear weapons production in the run up the Singapore summit. The discoveries have further undercut Trump's assertion that North Korea was "no longer a nuclear threat."

The regime is estimated to have as many as 60 nuclear bombs, plus missiles that can reach the US.

In Tokyo on Sunday, Pompeo rejected the suggestion the two sides were far apart, describing North Korean officials as more receptive to US demands behind closed doors.

"When we spoke to them about the scope of denuclearisation, they did not push back," he said.

It remains to be seen what the dispute means for a diplomatic effort that Trump has credited with helping to advert a nuclear war. The countries did agree this weekend to set up a working group to iron out further disagreements and to meet Thursday to discuss recovering the remains of US military personnel killed during the Korean War.

Still, Pompeo also said on Sunday he wanted to maintain a "maximum pressure" campaign against North Korea – a term Trump has said he was avoiding in order to foster diplomacy. The US will have a harder time reapplying pressure after Kim used his detente with Trump to improve ties with key neighbours such as China and South Korea.

"Trump's maximum-pressure campaign has been completely neutralised by a Kim's maximum-engagement strategy," said Stephen Nagy, a senior associate professor at the International Christian University in Tokyo. "This will make it increasingly difficult for the US to have a united front."