Kim Kardashian said that she was ‘heartless’ and claimed she ‘doesn’t care’ about her and her sisters’ beauty brand because she is preoccupied with her family life in recently unveiled court documents.

Kim, Kourtney and Khloe Kardashian have faced 170 lawsuits since 2012 over their trademarks, working standards, and infringing copyright.

Now they’re in the middle of a six-year legal battle over their debut makeup line, initially called Khroma and later re-named Kardashian Beauty.

UK cosmetics brand Kroma has claimed that the name Khroma breached its copyright and destroyed its business reputation in a lawsuit in which Khloe and Kim have been deposed.

The case was first filed in the US District Court for the Middle District of Florida but is now in the US Court of Appeals’ Eleventh Circuit. 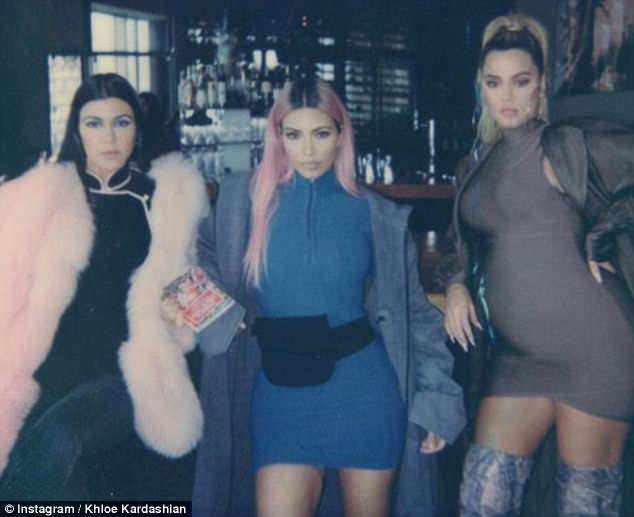 Kim, Kourtney and Khloe Kardashian are being sued by UK cosmetics brand Kroma, which claims their beauty range Khroma breached copyright and destroyed their reputation 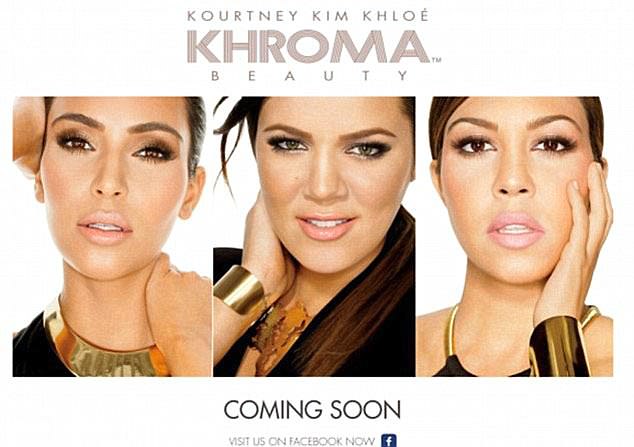 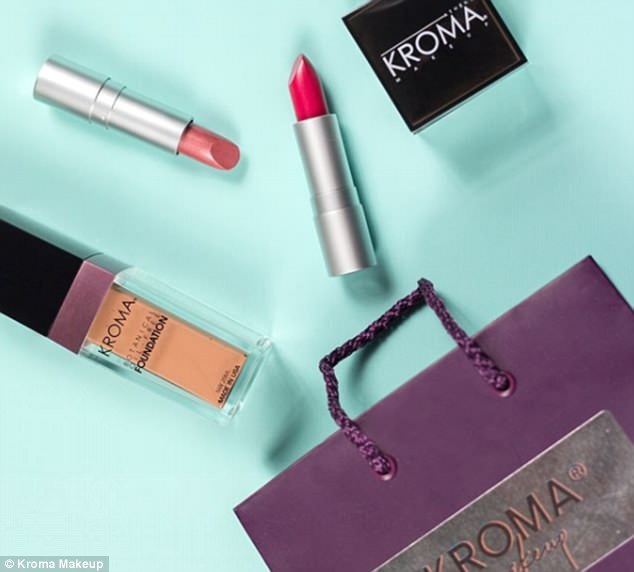 Court documents obtained by DailyMail.com reveal that Kim said ‘I don’t care’ about the brand in a deposition her lawyer called the ‘most abusive’ he’d seen in 33 years of practice.

Also in legal papers are emails between the sisters, Kris Jenner and their management teams, which feature Khloe’s fiery remarks about their makeup line’s name.

Kim was deposed in November 2015 about licensing issues surrounding the Khroma beauty range.

She told opposing lawyers that she had ‘no idea’ what was going on with the company licensing deal because she was ‘preoccupied with my family life’ and was ‘waiting for all this to die down’ before asking.

‘I’m about to have a baby,’ she said in the deposition. ‘I’m doing construction on my home, and I’m very preoccupied with other things.

‘If I take a little bit of time away from a company that is having legal issues, I would just prefer to worry about my family life and not think about it.’

When lawyers asked her to elaborate on who she’s is heartless about, Kim said: ‘Heartless wasn’t the word. I am preoccupied and I can’t explain to you – I say a word three, four and five times and I give you the same exact answer.

The lawyer responded: ‘I understand. You don’t care about what? It’s not your family, right? That’s not what you’re talking about?’

Kim told the lawyer that she had ‘never said once my family’ and told her that she was referring to Kardashian Beauty when she said she didn’t care. 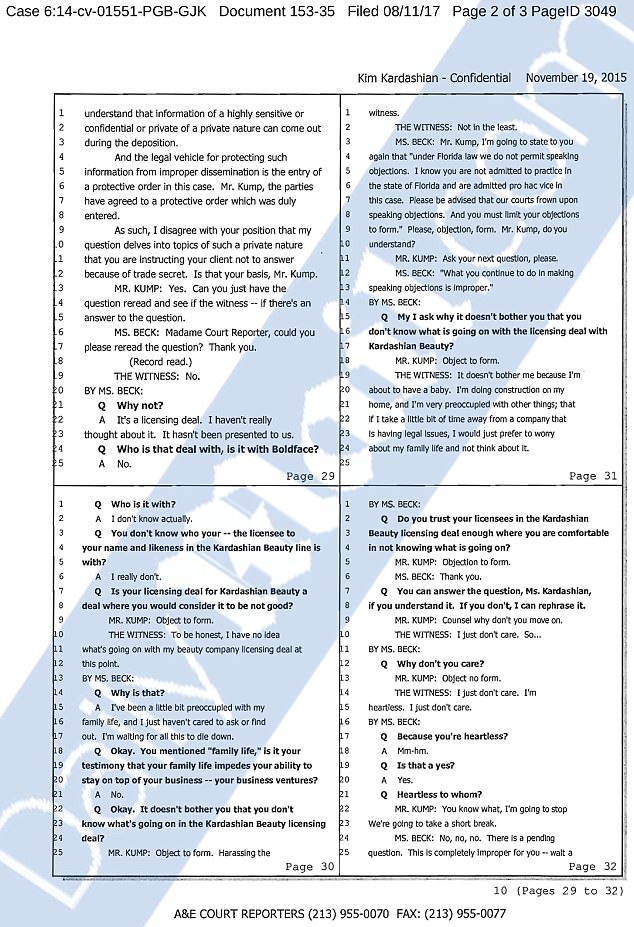 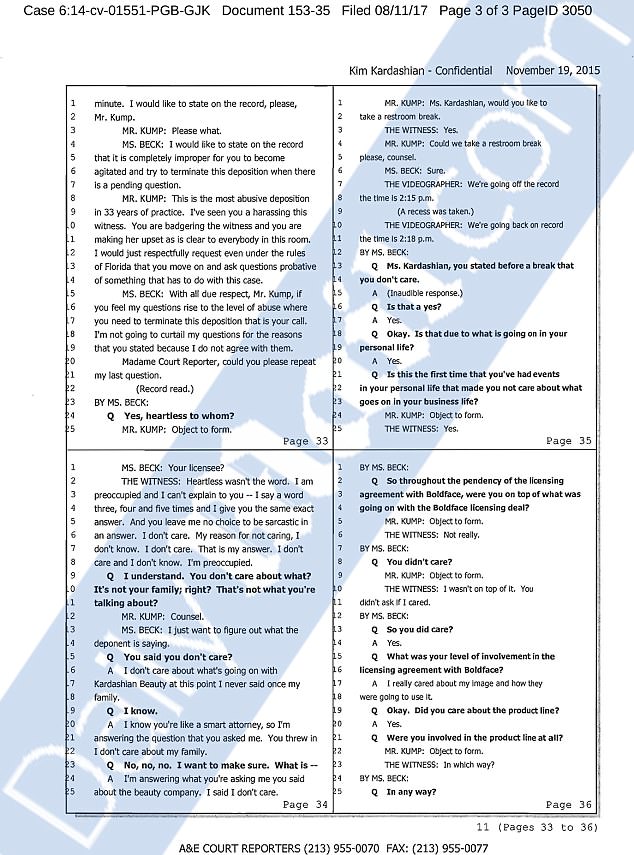 Kump said in the deposition: ‘This is the most abusive deposition in 33 years of practice. I’ve seen you harassing this witness and you are making her upset as is clear to everybody in this room.

‘I would just respectfully request even under the rules of Florida that you move on and ask questions probative of something that has to do with the case.’

Kim also revealed how a doodle she drew led to the logo of Khroma beauty, despite the company hiring an outside agency to create the design.

She said in her deposition: ‘It is Boldface’s job to present logos to us. They hire a logo specialist. So they presented us a bunch.

‘I did have a hand in it, but not knowingly. I was doodling on a piece of paper and I used some lines to write out my name and they liked how that looked, so they presented us with a “Khroma” like you see here, with the lines on it, and they took that.’

In emails between the sisters, Kim told her team that she was not happy with the product packaging or advertisements, saying that they looked cheesy.

‘Sorry guys but we aren’t charlie’s angels and we aren’t cheeseballs. Time to build a brand we are proud of instead of getting bullied into chessiness  (sic),’ she wrote.

When the brand agency wrote back, Kim: ‘OK, guys! I’m NOT gonna back down on this. I am looking at our khroma packing and those 3 figurines of Charlies Angels have GOT to go! I’m tired of being cheesy and will NOT stand for this trash!!!’

Khloe had a similar reaction when she was told there had been a name mix up and the beauty brand was going to be called ‘Kardashian Khroma’ – despite the sisters not wanting their last name attached to the product.

The sisters feared that if their last names were involved, the brand could be mistakenly attached to their clothing range.

Khloe emailed her assistants, sisters and Kris Jenner saying: ‘We specifically said we do NOT want Kardashian in the name AT ALL. So for them to come back and say our name is Kardashian Khroma. It definitely surprised us. 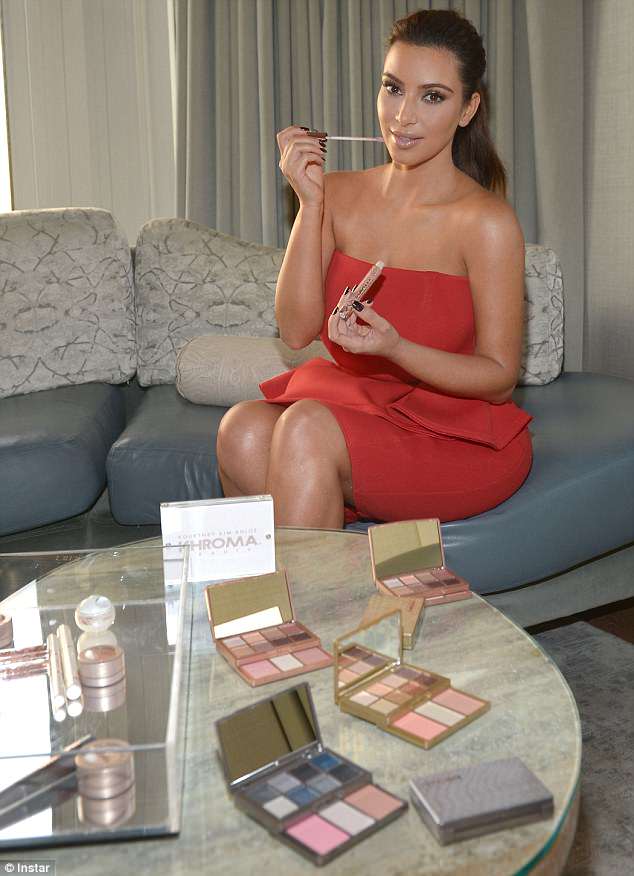 In emails between the sisters, Kim (pictured with the makeup brand above) told her team that she was not happy with the product packaging or advertisements, saying that they looked cheesy

‘Shelly [brand agent] did they not tell you the name before that meeting? You were in the initial meeting so you should have said something.

‘I HATE that I or my sister have to be the bad guys when our representatives are in the meetings and should be taking notes on OUR wants and needs.

‘We were ALL not happy with Kardashian Khroma and all of this could have been avoided (us looking bad) if our reps would have stopped it from the start. We all agreed on Khroma. Never with Kardashian in front of it.’

In another email, when asking why the licensing was a problem, Khloe wrote to her sisters: ‘Ummm yeah… Are they stupid??? We need to make sure we own the name first! What dumb f**ks!’

The legal ‘beauty battle’ also shows Kanye’s influence on the brand, with Kim’s PR Noelle Keshishian cooing over designs that the ‘Kanye team’ had sent them.

She said in an email: ‘I love the ones Kanye’s team did so far’ – although the girls then do battle over who will front the ad campaign, as it will be too expensive for them to do different adverts with each single girl.’

In another email, Noelle detailed how involved the Kardashian sisters were in the makeup brand.

She wrote: ‘The girls absolutely have complete involvement with it, so [press] release needs to reflect that. Everything from packaging was their idea, colors, textures. They have a clear vision of what they want their makeup line to be. Luxury to mass.’

The case between Kroma Beauty and the Kardashian sisters is still going through an appeal process.

Kroma has blamed the Kardashians for not only infringing copyright but also destroying their business reputation with some of the biggest brands in Europe, including Debenhams.

In one appeal brief, it states: ‘This included the abrupt termination of Kroma EU’s relationship with Debenhams, an upscale British department store chain, after its representative questioned why Debenhams should carry a product that can be bought at Walmart, as well as the fact that since mid-2013, almost every potential client of Kroma EU has expressed the understanding that its products were associated with the Kardashians, requiring constant (and often unsuccessful) corrections.’