All but state media barred from session, first since Muhyiddin took power, with king’s speech only item on agenda. 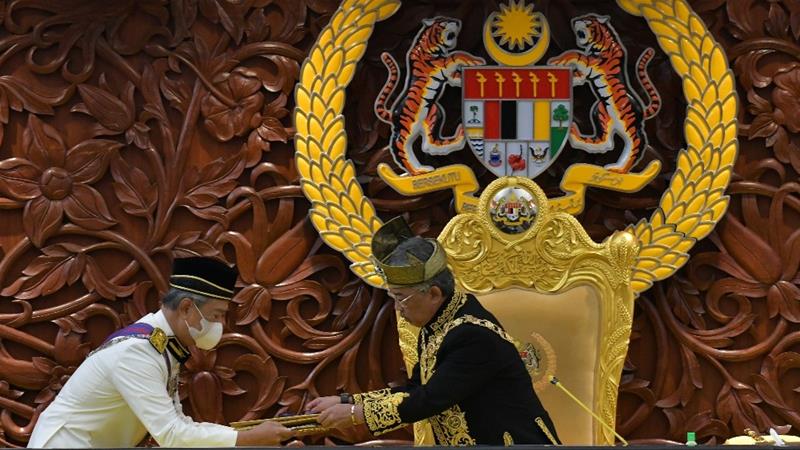 Malaysia’s king on Monday said the appointment of Muhyiddin Yassin as prime minister after a power grab two months ago was proper and constitutional, as Parliament met for a single day and a vote on an opposition challenge to Muhyiddin’s leadership was postponed.

The king appointed Muhyiddin to the top job on March 1, saying he believed the veteran politician had the support of a majority of the 222 members of Parliament’s lower house.

Muhyiddin’s administration includes parties that had been rejected by voters in the May 2018 election, and was challenged by the opposition – Muhyiddin’s former allies in Pakatan Harapan – who said they were the ones with the majority.

The lower house speaker had initially approved a motion tabled by Muhyiddin’s 94-year-old predecessor, Mahathir Mohamad, seeking a vote of no confidence, but the vote was postponed indefinitely after the government shortened Monday’s meeting, leaving time only for the royal address.

“Surely, every contest will have a conclusion. The country’s political wrangling could not be allowed to fester without any end,” Sultan Abdullah Sultan Ahmad Shah said in his speech, which was broadcast live on national television.

“Hence … in line with provisions under the Federal Constitution, I found that Tan Sri Muhyiddin Yassin had the majority support of members of the Dewan Rakyat and was qualified to be appointed as the eighth prime minister,” the king said, using the titles awarded to Muhyiddin.

The king’s role is largely ceremonial and it is unlikely his endorsement of Muhyiddin’s appointment would have much sway over a vote in Parliament on his leadership.

The seating chart handed out by parliamentary officials showed Muhyiddin with a majority of three, local media reported.

Monday’s meeting was the first time Parliament had convened this year, after the government postponed the session originally scheduled for early March. Its next session is due to take place from July 13 to August 27.

Ministers of Parliament were sat in every other seat, and only state media were allowed to cover the event, which began with a tribute to the country’s front line workers and was over by early afternoon. The government said the session had to be short because of the coronavirus.

In a news conference afterwards, Mahathir lamented the decision and noted that the pandemic was causing hardship for many ordinary people.

“It is the right of every member of parliament, irrespective of whether they think they will win or lose, to move a vote of no confidence,” he told reporters. “If we expose the wrong-doing of the government then we would hope that good sense would prevail.”

Mahathir resigned from his second stint as prime minister at the end of February after a power grab among a few disgruntled members of the governing Pakatan Harapan coalition.

After a week of wrangling in which Muhyiddin secured the support of the United Malays National Organisation (UMNO), which Harapan had defeated in 2018 amid growing anger at corruption allegations surrounding the party, he was named the head of government.

Muhyiddin, who co-founded Parti Pribumi Bersatu Malaysia with Mahathir, had been home minister in the Harapan administration. The party’s members of Parliament are now split between the two men.

Since taking power Muhyiddin has had to focus on the health and economic crisis caused by the coronavirus.

Malaysia, which imposed curbs on movement in mid-March but has since allowed people to return to work providing they follow social distancing guidelines, has reported 6,894 cases of the coronavirus and 113 deaths.