Lost at sea off the coast of Crete, Kushila Stein survived on a "handful of boiled lollies" and wrote her mother's name and phone number on the side of her inflatable dinghy in case she wasn't found alive.

The 47-year-old Warkworth woman, who was recently rescued after two days adrift in the Aegean Sea off the coast of Crete, was helping a British man transport his yacht from southern Turkey to Athens when she decided to take the dinghy to the Greek island of Folegandros to stretch her legs, her mother Wendy Stein said. 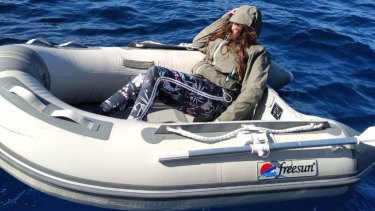 Kushila Stein had only boiled lollies to sustain her throughout her ordeal.Credit:HELLENIC COAST GUARD

Kushila messaged the skipper, Mike, late on Friday afternoon to say she was ready to head back to the boat, a Rival 34 yacht, but when she still hadn't appeared after a couple of hours, he assumed she'd decided to stay ashore a bit longer.

When he woke at 5am though and there was still no sign of either her or the dinghy, he began to search for her. To no avail. 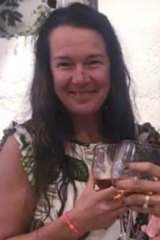 Kushila Stein, an experienced sailor, was helping transport a yacht between Turkey and Greece.Credit:WENDY STEIN

"He thought "Oh no, that does not look good" and called the police," Wendy told Stuff.

By this stage, Kushila had been adrift for some 12 hours, having lost control of the dinghy after an oar went overboard.

Drawing upon the survival skills she had learned as an offshore sailor, Kushila wrapped herself in three plastic bags to keep warm and, while she had no fresh water, rationed the handful of boiled lollies she had stashed in her day pack.

Whenever a plane flew overhead, she pointed a mirror toward the sun, hoping to create a flash that would attract passengers' attention.

She took off her wet socks and dried them on the side of the boat to help keep warm as temperatures dropped overnight.

"She also told me she wrote down my name and number and attached to the dinghy so they would know who to contact if they found her and she was dead," her mother told Stuff.

Kushila told her mother she had had second thoughts about rowing the motorless dinghy back to the yacht as the wind had "picked up a bit". But, deciding the yacht wasn't far away, she decided to push ahead.

After Mike alerted police, Greek authorities launched a search and rescue mission, sending out six coastguard vessels, a helicopter and an underwater drone.

Kushila had been at sea for between 37 and 40 hours when a coastguard vessel found her "halfway between Crete and Folegandos", Wendy said.

Wendy first learned of her daughter's predicament late on Saturday night New Zealand time, when a friend of Kushila's in the UK called to tell her what had happened. By this stage, her daughter had been missing for about 10 hours.

The friend travelled to Folegandros and did his best to keep the family in New Zealand updated, as did the Greek authorities, whom Wendy commended for their "professional" handling of the situation.

Wendy said she had been ready to fly out to Greece when a local police officer phoned her to say her daughter had been found alive and well.

She was subsequently reassured that Kushila, who was sent to hospital after her ordeal, was in good health.

"She told me: 'I did everything I could to survive,' Wendy said.

"She has been trained in sea survival so is quite competent. I think that might have saved her life."