At 750 metres long, this huge sewer slug sounds like a beast from a horror movie, but it's not. It's very real, and it's called a fatberg. 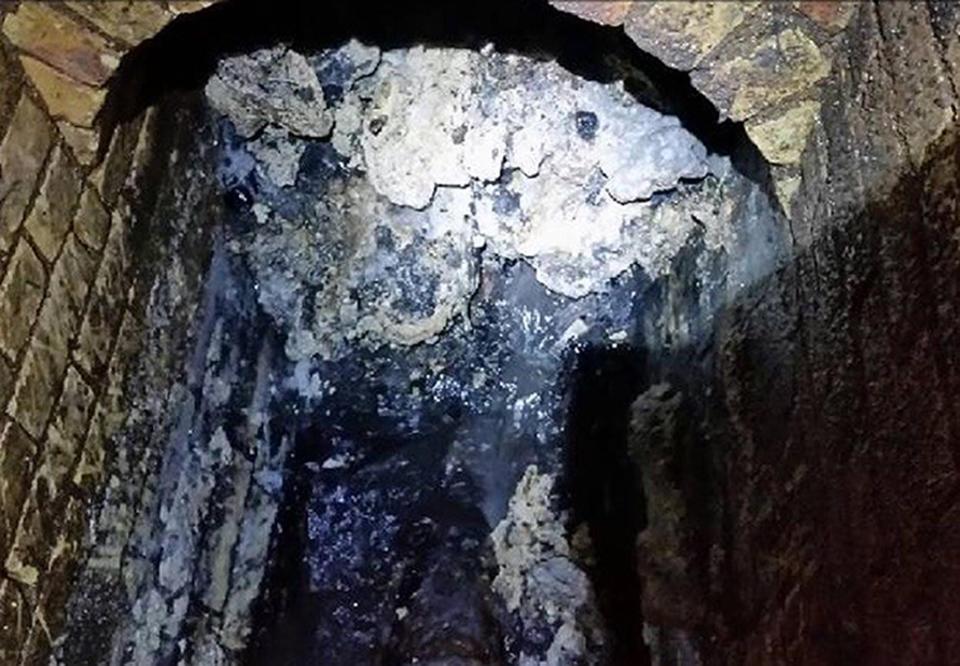 Fatbergs are the huge globs of hardened gunk clogging the sewers beneath almost every UK city, growing larger with every flush.

Masses of congealed cooking fat sticks to wet wipes, condoms, food wrappers and human waste in the sewers beneath us, hardening into a foul-smelling concrete which threatens to block tunnels and flood sewage waste into your home.

The huge brown blobs can grow meters tall and hundreds of metres long, with water providers declaring an epidemic of fatberg emergencies in 23 UK cities, costing tens of millions of pounds to get rid of.

And there's only one way to wage war against a fatberg: pinch your nose, get down into the sewer, and start chipping away at it by hand. 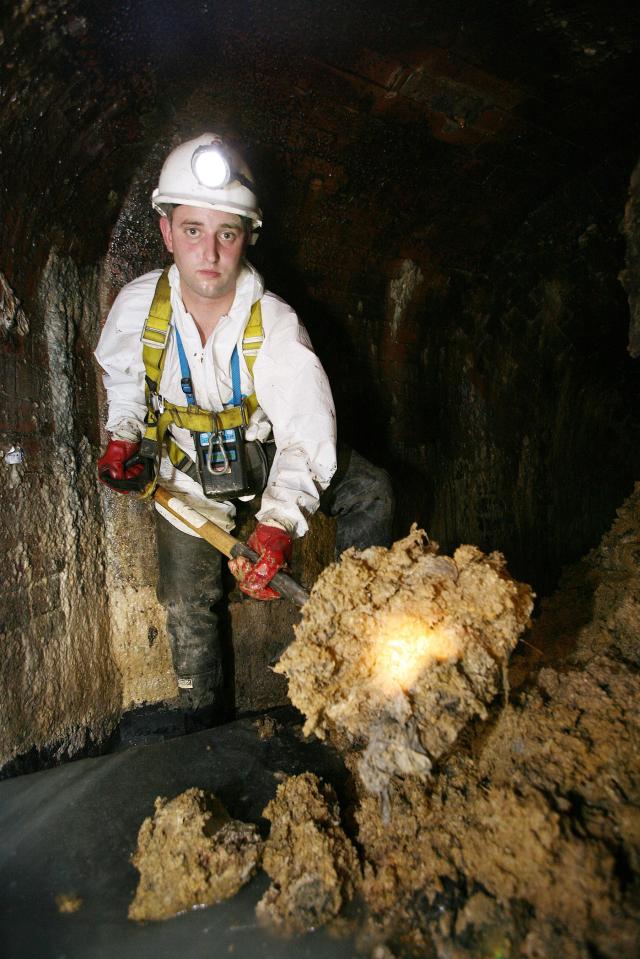 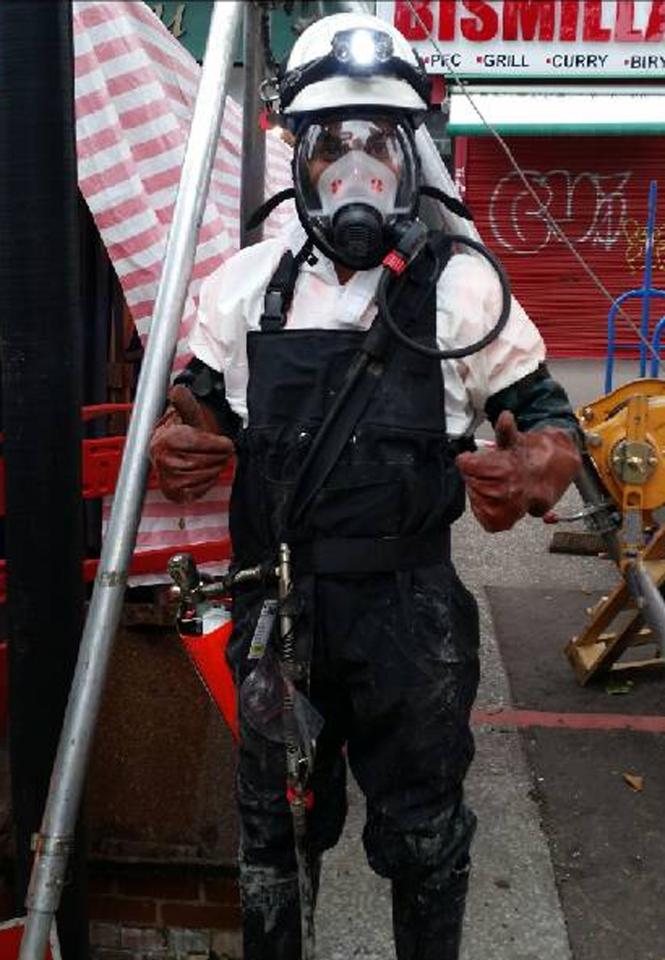 The brave souls who are employed by Thames Water to fight London's fatberg epidemic are called "flushers".

Armed with gas masks, rubber suits and spades, they descend into the darkness of the capital's sewer system every night to break up the 12 fatbergs currently clogging London's arteries.

Each snaking mass of solidified gunk takes weeks to clear, and flushers have to contend with toxic gasses, deadly diseases and a torrent of human waste to get at them.

If they fail, sewage pipes will be blocked and, with nowhere else to go, raw waste will start spilling out into people's homes. They're all that stands between us and the poopocalypse. 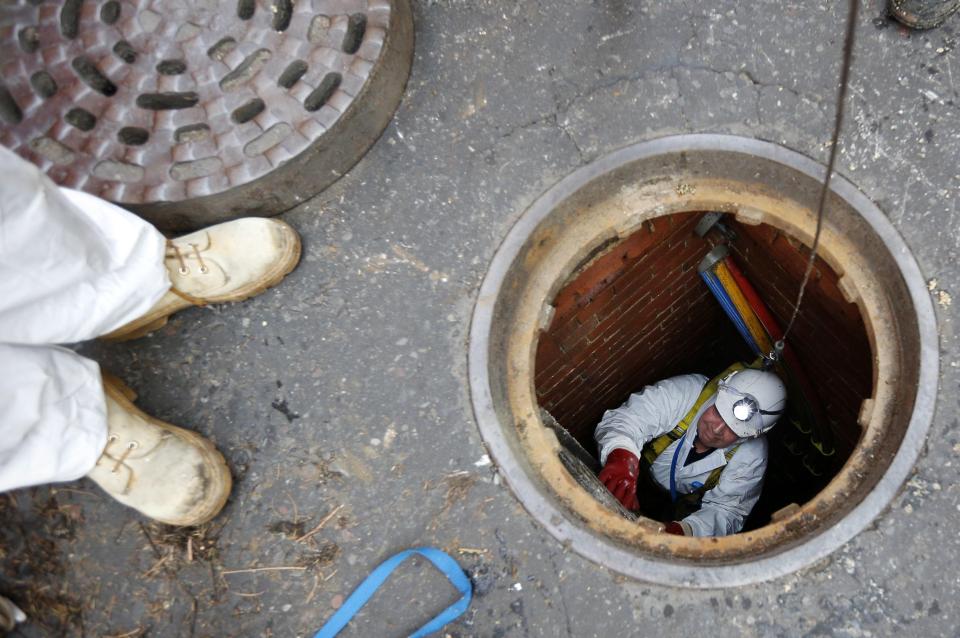 Now, a new documentary shines the light on a team of flushers as they drop into the abyss of the capital's sewer system to fight back against the fatbergs.

In Fatberg Autopsy: Secrets of the Sewers, cameras follow a team of eight plucky flushers as they butt heads with a 750 metre long blockage beneath London's Southbank.

Fatbergs made headlines last year when an one longer than Tower Bridge and weighing the same as 11 double-decker busses was found in London's sewers… but this one is even bigger – the biggest in the UK, in fact.

And it falls to 21-year-old Adam, nicknamed "Manhole" because of his difficulty lifting the covers, to have the first stab at it. 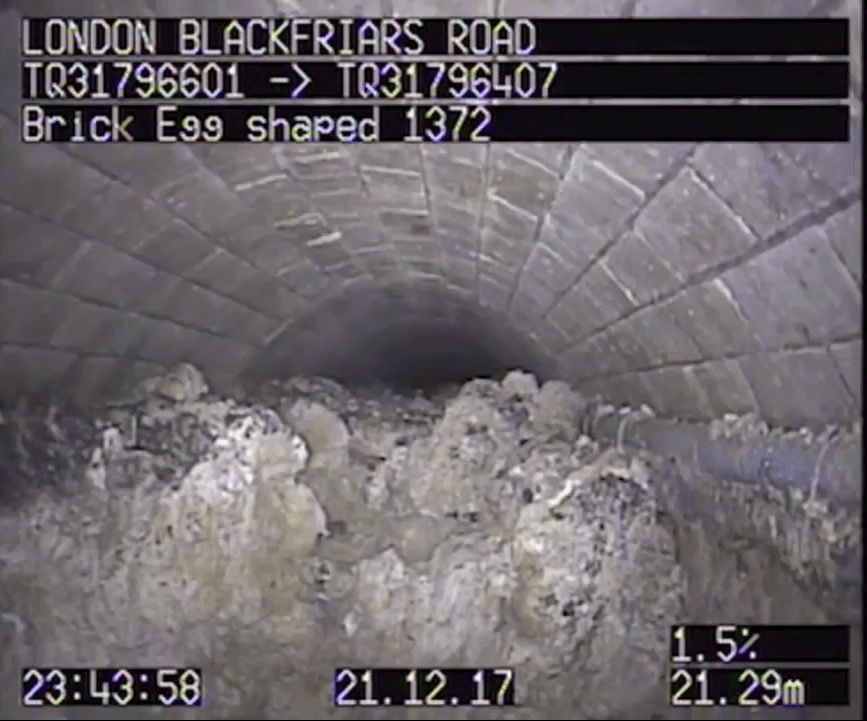 In full protective gear with goggles and a gas mask on, Manhole looks like he's about to head into a disaster zone.

But where he's going is far smellier.

With a camera strapped to his rubber suit, Manhole can only wade slowly through gloopy knee-high sewage, topped with a thick layer of fatty scum.

"We've been down worse," says Phil, an experienced flusher watching Manhole's camera feed from the comfort of a nearby van.

"We'll often find fat, oil, grease… and sweetcorn. There's always a bit of sweetcorn in there somewhere. It just holds its form." 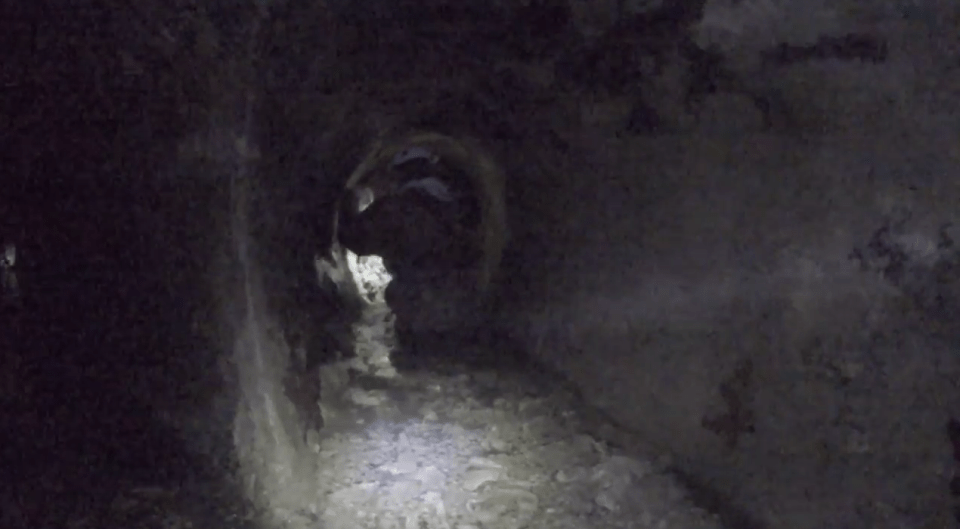 After a few minutes dragging himself through the sludge, Manhole reaches a solid glob of pale-brown fat, metres wide and taller than he is.

There's only one thing for it: take a shovel to the stinking mound of fat so the smaller chunks can be washed away on the brown current. How do fatbergs form?

Fatbergs are mostly caused by cooking fat, which clings to the exposed brickwork of sewer tunnels after it's dumped down the drains by restaurants.

UK households add to this by tipping an extra 18 million litres of cooking fats down their drains, as well as mountains of almost indestructible wet wipes.

This fat then mixes with hardy wet wipes and any other plastic rubbish flushed from our homes, sticking to the fat as it travels through the sewer system.

Meanwhile, chemicals flushed into the water cause the fat to harden, creating a smelly problem which costs tens of millions of pounds a month to fix nationwide, and £1m a month in London alone.

This money is spent on employing flushers to break down fatbergs so they can wash down treatment works, where the fat is converted into renewable biofuel energy.

Restaurants can be prosecuted for dumping too much grease down the drain, but as eating-out has become vastly more popular in recent decades, the scale of the problem has grown.

Ultimately, the cost of dealing with fatbergs is being passed on to water users, with bills already climbing to reflect the problem.

Dangers in the deep

As vile as it is, the smell of fat mixed with faeces is the least of the flushers' worries.

Even more deadly are the gasses which ooze out of fatbergs, including lethal hydrogen sulphide – a colourless gas which smells of egg and can kill within minutes.

As flushers take their picks to the solidifed fat or blast it down with pressure hoses, there's always the danger that deadly toxin will seep from the cracks into the confined tomb-like tunnels. 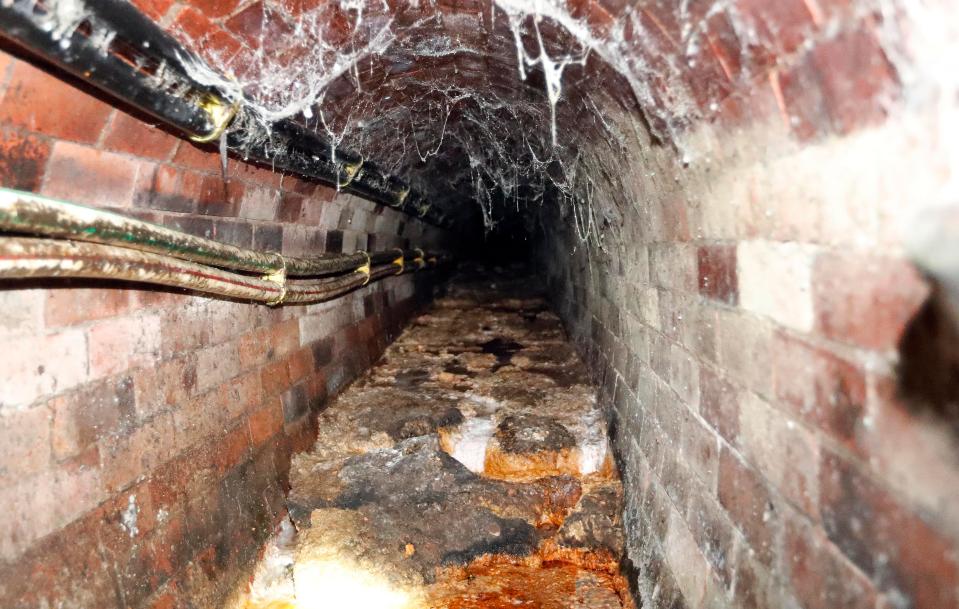 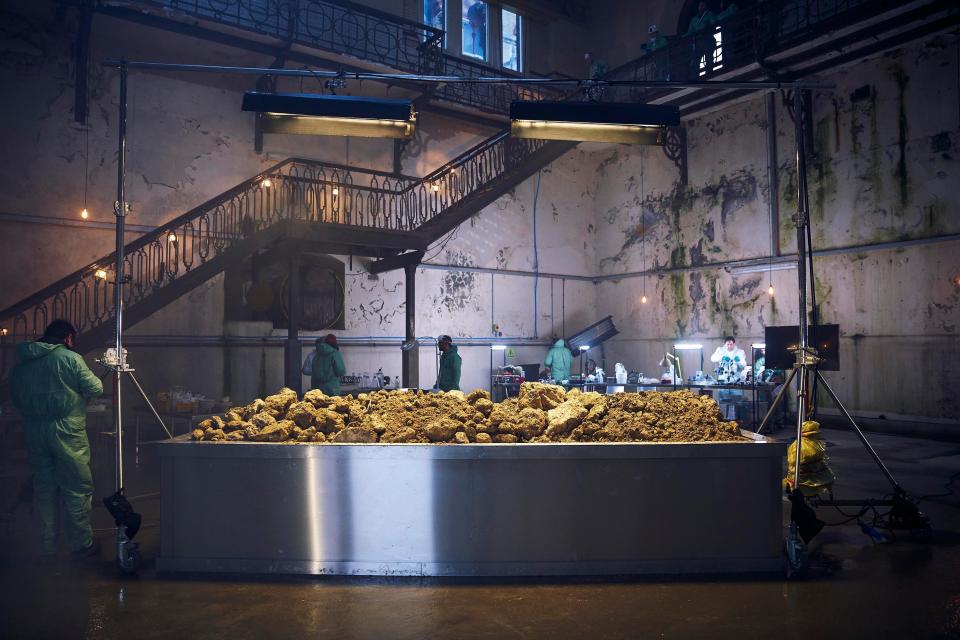 After two hours of scraping at the glob of fat with his shovel, Manhole's gas alarm starts beeping, indicating deadly levels of hydrogen sulphide in the air he's breathing.

He needs to be evacuated from the sewer, but in his hurry to escape from the fumes, he splashes raw human waste into his eye.

It's just another day in the life of a flusher.

"I'm still not sure how I got into this," he says, standing by the sewer entrance in the middle of the night. "But here I am."

But there are perks to flushing: sewer workers have good job security, and teams quickly build up a strong sense of camaraderie. 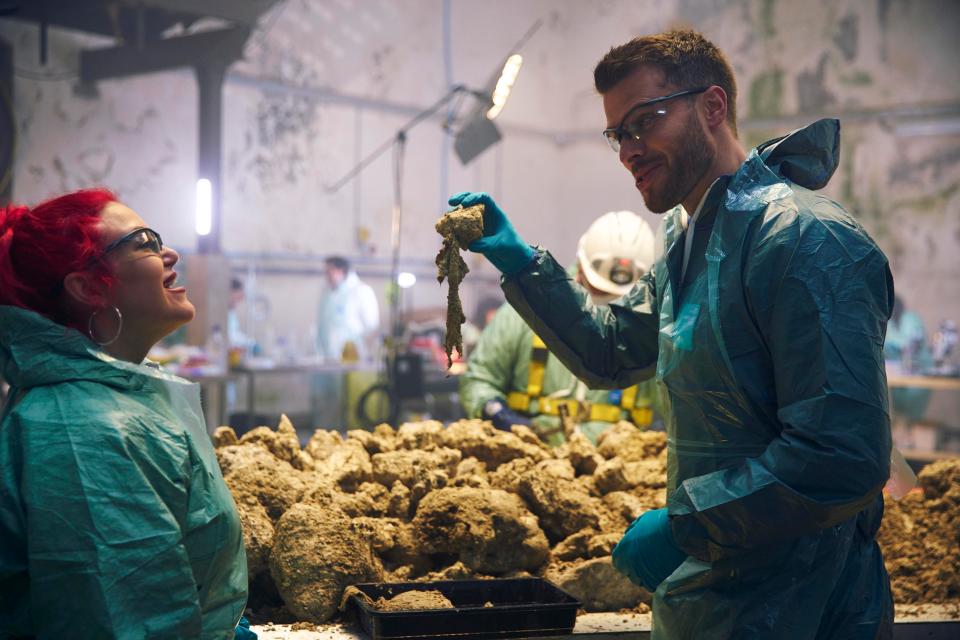 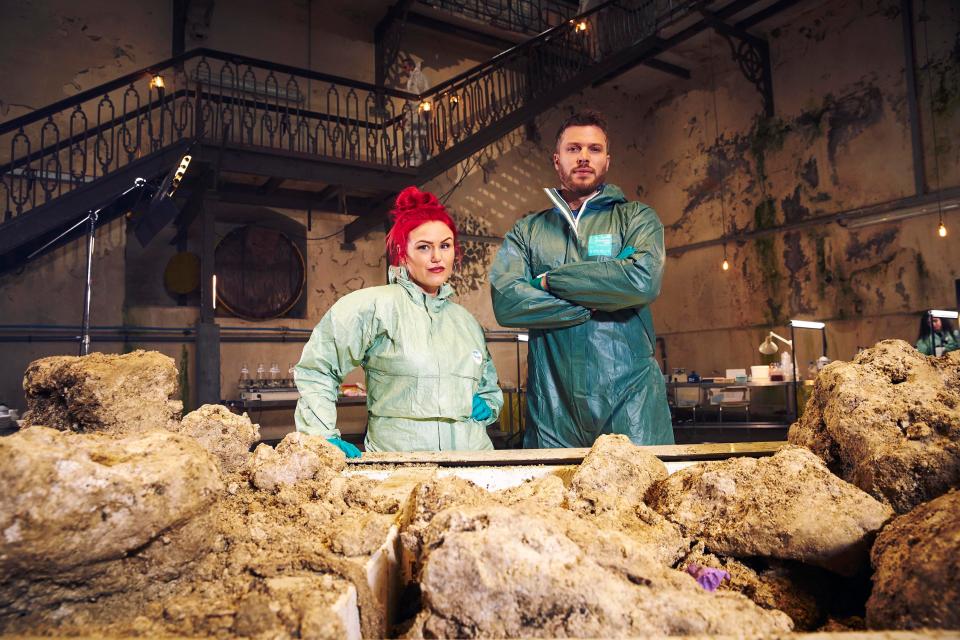 At the end of their mission, the team manages to winch a 16-stone block of fat to the surface, so presenter Rick Edwards can perform the world's first fatberg autopsy.

Along with mortician Carla Valentine and a team of technicians, Rick hacks away at the mass of fat to reveal what's lurking inside.

"It looks like crumbly cheese," says Rick, as he holds up a chunk.

Only, it smells far worse and there's an old condom protruding from it, dangling limply from the side. 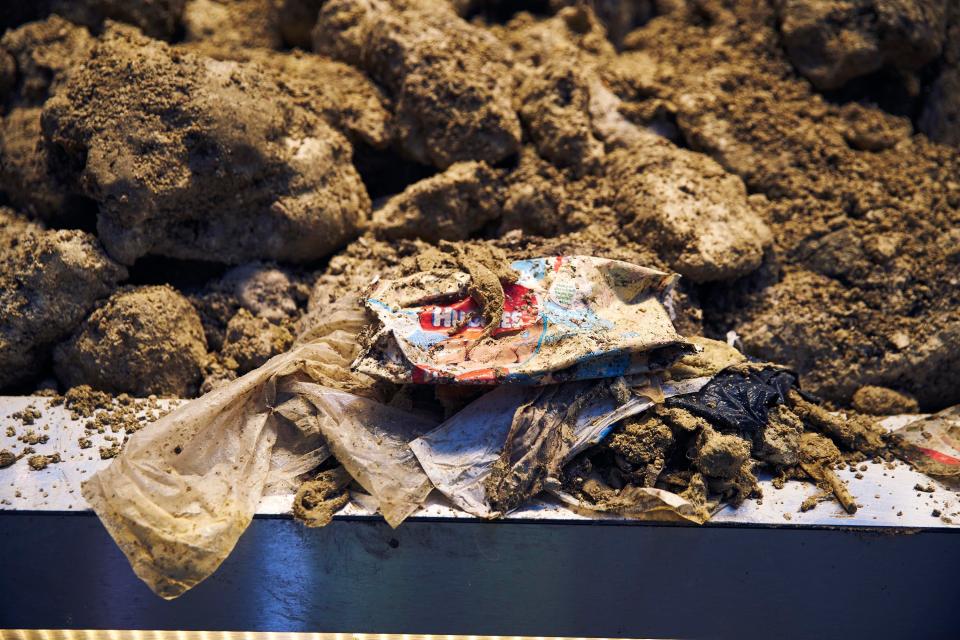 When the clump of Britiain's biggest fatberg is dissected and examined, condoms, live worms, needles, and a mountain of wet wipes are found among the mass.

Acne creams, household soaps, paracetamol and a mass of illegal gym supplements and recreational drugs were also revealed to be in the fatberg's DNA.

Toxicologist Dr John Wilkinson says on the show: "We've found a good number of pharmaceuticals as well as peaks for cocaine and MDMA.

"Anything we put in our bodies is going to end up here." 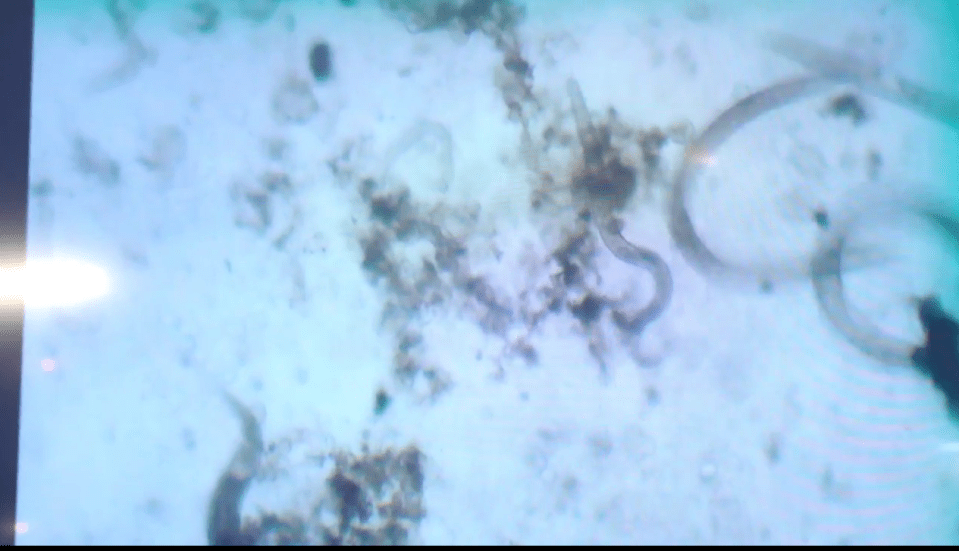 Later tests for pathogens reveal antibiotic-resistant strains of bacteria are lurking among the fat.

The superbugs, which could be deadly, are joined in the fetid fatberg by E.coli and Listeria, bacteria which cause upset stomachs, vomiting and diarrhoea. 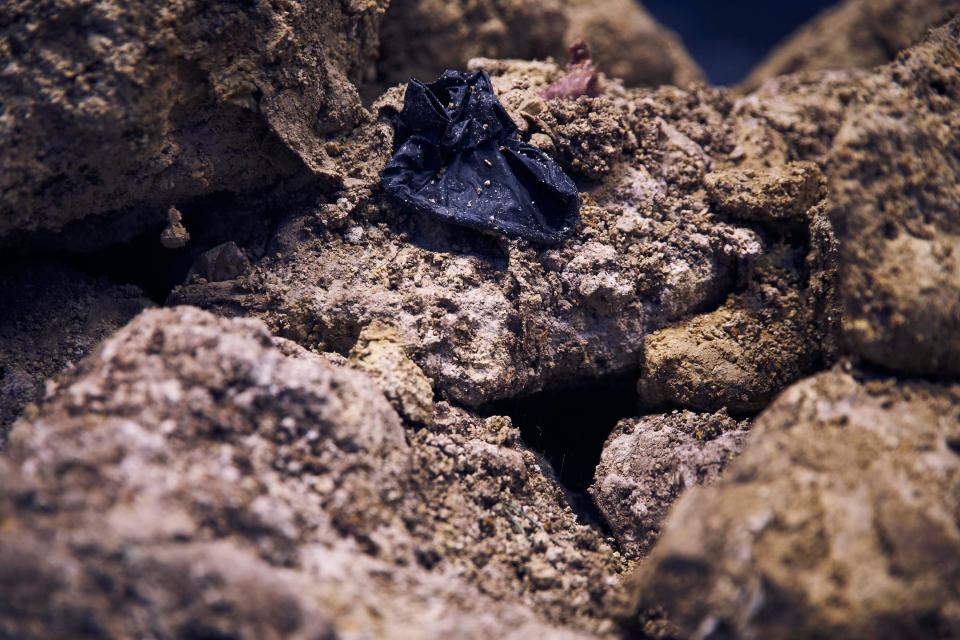 If a fatberg blocks a sewage pipe completely, and the torrent of trapped waste ends up seeping into your home instead, these dangerous bugs which would emerge with the rising tide.

And the only thing standing between us and a leak is the brave army of flushers who chip away at fatbergs every night, using shovels, high-pressure hoses and sometimes their own hands to clear the blockages.

So next time you force a wad of baby wipes down the loo or pour your greasy food waste down the sink, beware the monster you could be feeding, and think before you flush.