Knifeman, 43, who stabbed five people in Manchester shopping centre after buying £1.50 blade in his local shop is held indefinitely in hospital

A knifeman who stabbed five people in a Manchester shopping centre after buying a £1.50 blade in his local shop is to be detained in hospital indefinitely.

Shoppers at Manchester Arndale centre ran for their lives and dived for cover as Raphael Chevelleau, 43, knifed three people and attempted to wound two others as he dashed through the mall.

Chevelleau, a paranoid scizophrenic, bought the cheap kitchen knife on the morning of October 11 2019, from Blackley Pound Store near his flat in Rochdale Road, before he caught a bus into the city.

Manchester Crown Court heard he entered the Arndale at about 11.05am and shortly after went into a baby-change room, where he unwrapped the knife packaging and left with the stainless steel chef’s knife in his jacket pocket.

Prosecutors then described how he broke into a run ‘with no warning’ and randomly stabbed five members of the public. 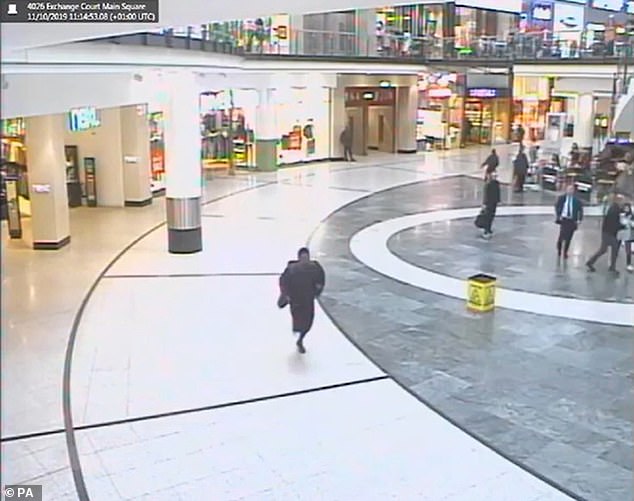 Schizophrenic Raphael Chevelleau entered the Arndale shopping centre in Manchester at about 11.05am and shortly after went into a baby-change room, where he unwrapped the knife packaging and left with the stainless steel chef’s knife in his jacket pocket 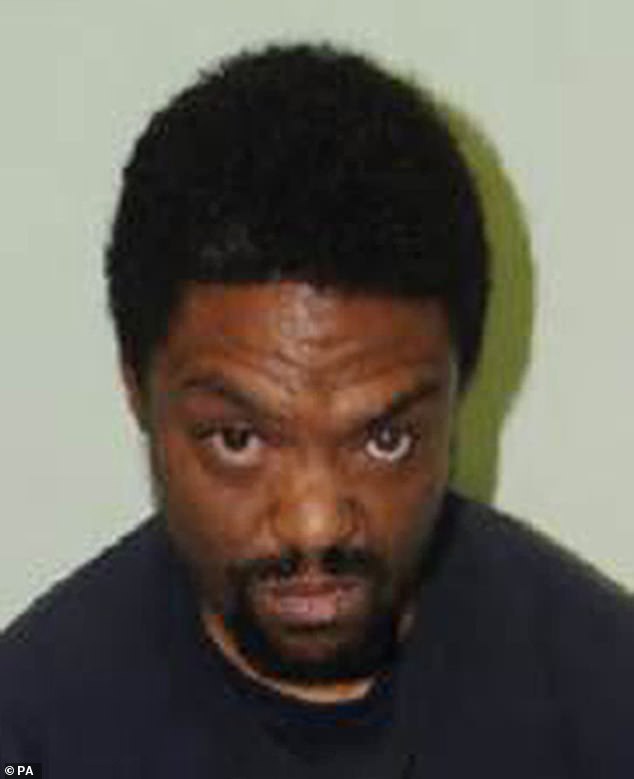 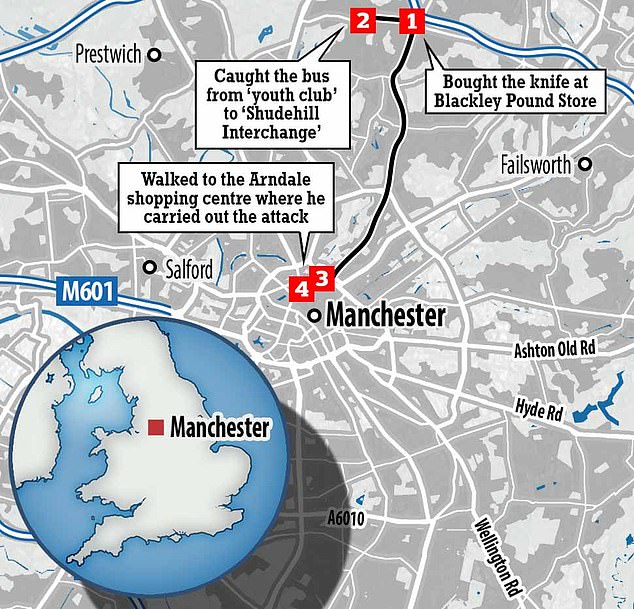 His first victim was a 61-year-old engineer, who Chevelleau stabbed in the back.

The defendant swiftly moved on to a 35-year-old woman walking with her husband in the centre.

The court heard he ran past them before he returned and swung the knife towards her stomach and grazed her.

The woman later recalled Chevelleau had a ‘wide cheesy smile’ as he attacked her.

Chevelleau next targeted a 45-year-old woman pushing her baby in a pram, who had a lucky escape as the knife came close to her ribs.

A 21-year-old woman from Ireland, visiting the city with friends for an 18th birthday celebration, was then attacked as their group sat outside a Starbucks cafe with suitcases in tow.

She told the court that people were shouting ‘everybody run’ and a crowd ‘literally parted’ as the defendant was chased by a security guard.

In a statement she said: ‘The man was looking right through me and looking as if he really wanted to hurt me.’

Chevelleau grabbed her and stabbed her right shoulder and right bicep.

He attacked his final victim, a 52-year-old female department store worker, as he ran out of the Arndale.

She said she joined others ‘running for their lives’ and felt an impact on her left arm and back as she grabbed a railing down steps.

She took refuge in the Arndale after Chevelleau stabbed her and recalled: ‘I couldn’t move any more, if he comes back he will kill me. I thought I was finished.’

Mr Ford said only the layers of her clothing, including a bubble coat, meant she was not more seriously wounded.

Chevelleau dumped the knife in a waste bin in the street after his violent spree lasting just one minute and 27 seconds. 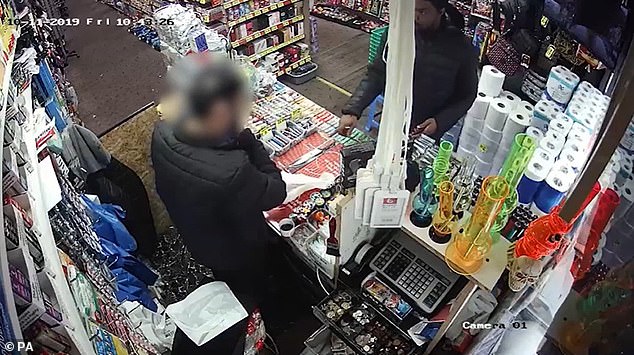 Chilling CCTV footage from Blackley Pound Store in Rochdale captures the moment Chevelleau (pictured above with the knife on the counter) calmly purchased the £1.50 blade he used during a random rampage that saw him stab five people 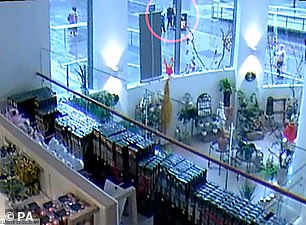 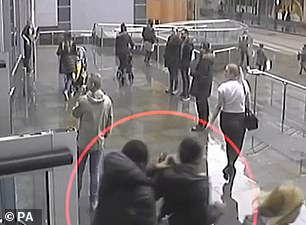 Prosecutors said Chevelleau caused ‘widespread fear and panic among the general public’ during his minute-long stabbing spree. He is pictured running through bystanders (right)

He later told police ‘this was for my people’ and said: ‘I was going to stab my ex-girlfriend but I couldn’t be bothered to travel.’

The court was told about ‘Natalie’, a woman Chevelleau had become ‘fixated’ with. It was heard that while ‘Natalie’ is a real person, she is regarded as being ‘part of his delusional ideas’.

Chevelleau, who was 41 at the time, had not been in a relationship with her and had not seen her for at least 10 years.

Referring to ‘Natalie’ after being arrested, Chevelleau said: ‘I was going to stab my ex-girlfriend but I couldn’t be bothered to travel.’

After getting off the bus in Manchester city centre he decided to ‘take it out on members of the public’ instead, Judge Dean said.

The incident had ‘life-changing consequences’ for the five victims, the court heard.

Judge Dean said Chevelleau’s intention to seek out and attack ‘Natalie’, and the stabbings in the Arndale, were ‘entirely driven’ by his paranoid schizophrenia.

Chevelleau was sentenced under the Mental Health Act to be detained indefinitely at Ashworth Hospital, a high-security psychiatric unit in Maghull, Merseyside.

If he were to be released then Chevelleau would pose a ‘substantial risk’ of causing serious injury or death, the judge said.

Judge Dean added: ‘It is difficult to see that risk will ever be managed in the community.’

The judge said that if Chevelleau did not suffer from mental health problems, he would have received a life sentence with a minimum term of 15 years in prison.

As today’s hearing finished, Chevelleau, of Rochdale Road, Blackley, asked the judge: ‘Can I say something?’

Judge Dean, noting the defendant would be able to speak to his barrister after the hearing, replied: ‘No thank you, Mr Chevelleau.’