Have a Mary Christmas! Row erupts over calls for a female volunteer to be allowed to play Santa Claus in town’s annual festive tour

A row has broken out over calls for a female volunteer to be allowed to dress up as Santa Claus for a town’s annual Christmas parade.

Father Christmas has toured the streets of Newton Aycliffe every Christmas Eve since the 1960s.

Excited children and their parents crowd the County Durham town centre to see Santa go by on a float as he hands out sweets to the youngsters.

But when two women volunteered to play Santa this year, one member of the local council said ‘political correctness’ was taking priority over residents’ wishes and tried to stop them. 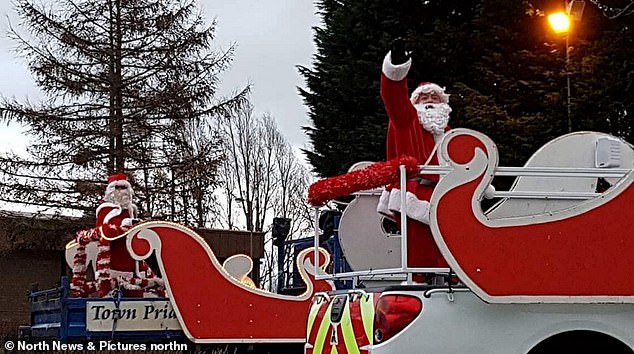 At a recent council meeting Great Aycliffe Town Council agreed that one of the women who put their names forward should be granted the role.

The origins of Santa

The Santa Claus celebrated by families across the world today is in fact modelled on a 4th century bishop known as St Nicholas.

He was known for his secret gift giving and generosity towards children, such as putting coins into the shoes of people who left them out for him.

This practice is still celebrated on his national feast day, December 6.

The Bishop of Myrna, in what is now Turkey, was popularised in 6th century Europe as Father Christmas, who secretly gave gifts to young children.

The modern character – bearded, plump and jolly – began to evolve in drawings, magazines and poems such as Clement Clarke Moore’s A Visit From St Nicholas, published in 1823 and more commonly known as The Night Before Christmas. He was also popularised by companies such as a Philadelphia shop that used a life-size model, then famously by Coca-Cola while newspapers began publishing Christmas supplements. This sparked familiar complaints about commercialisation.

Having moved to the North Pole and conquered the United States, Santa bounced back to Europe as a softer version of those cruel fairytale characters from medieval times, taking on a local guise such as Father Christmas in Britain.

But Labour Cllr Arun Chandran objected, saying: ‘There is no shortage of male volunteers to act as Santa Claus, so we should not permit a female volunteer to perform the role.

‘This has nothing to do with equality. There is no legality issue on this.

‘My understanding is that Santa Claus otherwise called Father Christmas is a male role.

‘I have no issue with a Mrs Claus. But Santa Claus being a man is a long-held tradition accepted by the cast majority of society without question and change just for the sake of that will only serve to attract negative publicity.’

He continued: ‘I believe that children in particular will be expecting a male Santa, and that it may well reflect badly on the council if we were to deliberately introduce a form of political correctness just because a Labour Party member turns up at a Events Sub Committee meeting to demand women’s rights to be Santa Claus.’

The councillor, who has previously been investigated for trying to influence a local by-election, said he would be happy with a female Santa if ‘other councils are introducing women Santas everywhere – but they are not.’

After making his speech, council clerk Andrew Bailey pointed out councillors had voted unanimously in favour of electing the female volunteer to dress as Santa.

But in keeping with council procedure the motion will be formally carried at the next committee meeting tomorrow night and approved at a meeting of the entire council on December 12.

One councillor George Gray, 83, played the role of Father Christmas on the Santa tour for nine years and said that it’s a ‘hard job’.

‘From 2003 to 2012 I did the Santa tour as Santa Claus. I was the only councillor that did them and my wife was the navigator.

‘We enjoyed it. At that time I was only young, at a certain age it is hard work. If that lady wants to go on the back of that float I feel sorry for her!’ 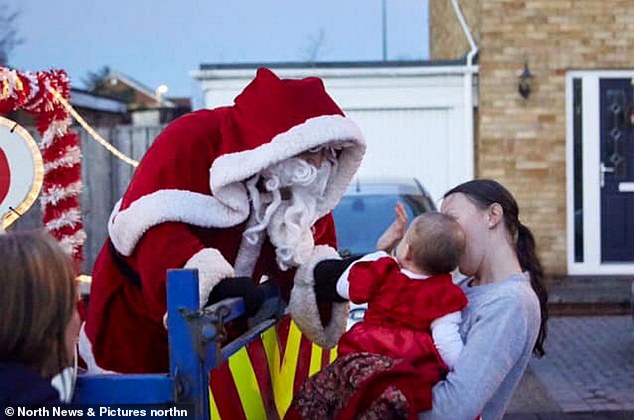 Father Christmas has toured the streets of Newton Aycliffe every Christmas Eve since the 1960s. Pictured is a previous year

He added that he wouldn’t stop anyone from doing the job, but if that enough men had come forward, then he would be against it.

‘If that lady wants to do it she can, but she’s got to realise if anything happens to her it is her own fault.

‘I would not stop anybody but I’ll have to find out tomorrow night if they’ve got plenty of men to do the job and if they have I’ll be against it.

‘I know what it’s like on the back of it, it is a hard job. It is an experience.

‘I have been on the council for 28 years and the last thing we do every year is the Santa tours for the children – we can’t do away with them.

‘I can’t understand the trouble we have had, we shouldn’t have had any trouble.’