The Labour Party is considering having co-leaders if Jeremy Corbyn fails to become Prime Minister next month – with each representing an opposite side of the Brexit debate.

Mr Corbyn is struggling in the opinion polls with a YouGov survey showing massive drops in support for his party across London, the Midlands, and the North – including many traditional leave-voting Labour heartlands.

Senior Labour officials have been discussing what will happen if Mr Corbn resigns shortly after next month’s election. 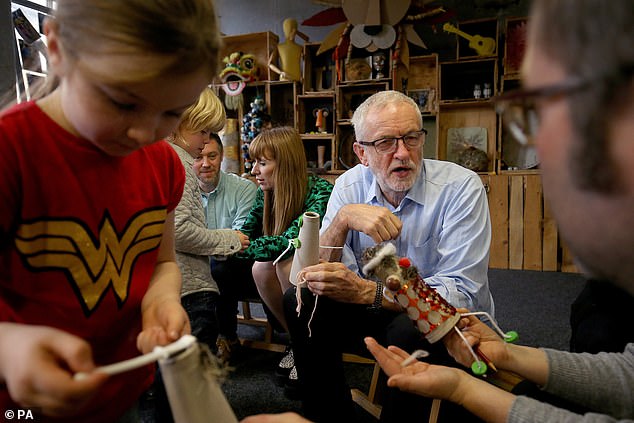 Jeremy Corbyn, pictured with shadow education secretary Angela Rayner earlier today in Leeds could be replaced by two co-leaders depending on the outcome of the election 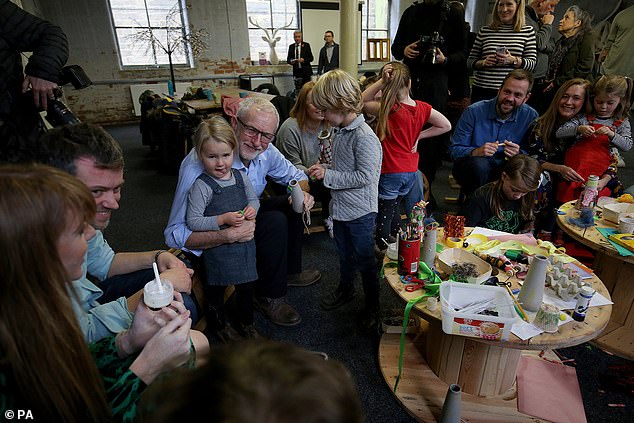 Mr Corbyn, visiting the Scrap Creative Reuse Arts Project in Farsley, Leeds, has been polling poorly although his team is hoping he can surpass low expectations while on the campaign trial

One plan suggests Mr Corbyn could be replaced by two people on a job-share basis.

The party’s loss of support across working class areas is being seen as a failure to reach those in poorer areas.

According to HuffPost UK, the two-leader plan will involve one person from a northern strongly leave constituency and a second representing a remain area.

The party believes that by representing both leave and remain they can begin the process of repairing the schism within the organisation and the country.

A source said: ‘The Greens make it work, so why can’t we? It would let us represent the smaller towns and the big cities with different voices. It would get us away from the presidential-style of politics that has dominated British politics lately.’

The Labour Party’s constitution has a proviso for the leader’s position to allow a job-share.

In Britain, the Green Party already has co-leaders with Sian Berry and Jonathan Bartley sharing responsibilities.

Labour already has to replace Deputy Leader Tom Watson who earlier this week announced his decision to stand down from the position. He also decided against trying to defend his seat during next month’s election.

Former Tory backbencher Andrew Bridgen told The Sun: ‘This just underlines the problem Labour has and the circle it can’t square – how to keep their metropolitan Remain supporters and their Midland and Northern Leave voters on board.’

The Labour leader is unlikely to resign immediately following an election defeat.

The party would be keen to run a ballot for leader and deputy leader at the same time because it would reduce postage and administration costs of running separate elections.