Las Vegas police arrested and charged a woman in the murder her 5-year-old daughter after officers found two children locked in a hot bedroom, and the mother purportedly called it a “necessary sacrifice,” authorities said.

Kemaya Taylor, 23, allegedly locked her daughters, ages 2 and 5, inside a bedroom that was “exponentially warmer” than the rest of the home. Officers reported that the bedroom temperature was 101 degrees, and a humidifier set to max was running.

“(An officer) reported Taylor making spontaneous utterances such as ‘it was a necessary sacrifice,'” police said in the report. “Witnesses in the neighborhood also overheard Taylor say ‘I killed it’ and claimed to be ‘the son of Jacob.’” 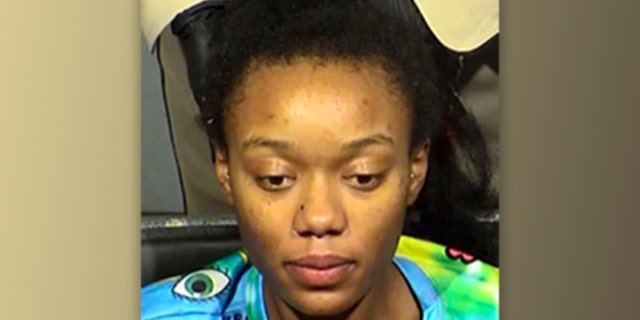 A Las Vegas woman allegedly killed her 5-year-old daughter who was found dead in her sweltering bedroom — and told investigators "it was a necessary sacrifice," police said. Kemaya Taylor, 23, was charged with murder and child abuse after her daughter’s body was discovered in the family’s stifling home on June 28.
(Las Vegas Metropolitan Police Department)

A concerned friend had reached out to police after receiving a text from Taylor, which the friend “perceived as a vague suicidal threat,” 8 News Now reported.

“Taylor stated she was ‘quitting her job’ and ‘watch out on the news,'” police said of the call.

Two officers made contact with Taylor on June 28 at around 7 p.m., finding her home in “complete disarray.” Officers determined that Taylor was “suffering from some sort of mental illness,” according to the report.

Officers took Taylor into custody before searching the home, where they found the two girls: The younger girl was still alive, but the 5-year-old was unresponsive. One of the officers attempted CPR, but medical personnel pronounced her dead at the scene.

Taylor reportedly did not respond to police questions, instead insisting she be transported to “an insane asylum,” police said.

A neighbor also reported seeing Taylor damaging vehicles in the neighborhood with rocks prior to the officers’ arrival.

Taylor remains in custody at the Clark County Detention Center. Her younger daughter remains in the custody of Child Protective Services.

She is scheduled for a July 15 appearance in Las Vegas Justice Court.