Washington: Nearly 7 in 10 Latinos disapprove of President Donald Trump, a new Pew Research Centre survey has found, but it's unclear whether they'll take out that frustration next month by voting Democratic – or voting at all.

Pew, whose pollsters spoke to more than 1500 Latino people around the country between late July and early September, found that 69 per cent were unhappy with how Trump is handling the presidency. And they're downbeat and pessimistic about their economic situations and the state of politics in the United States.

Democrats are hoping for a strong turnout from Latino voters, which they need to give them the edge in key races around the country as they vie to take control of Congress.

Forty-four per cent of Latinos said the Democratic Party "has more concern" for Hispanics, versus 11 per cent who said the Republican Party does, but that number was lower than it was in 2016 (51 per cent) or 2015 (48 per cent).

"Many Hispanics have in the past told us in our surveys that Democrats and Republicans share blame for no immigration reform being passed," said Mark Hugo Lopez, Pew's director of global migration and demography.

Lopez recalled how, in 2016, "there was a lot of conversation that Latinos were going to turn out to vote because they were angry about the way Donald Trump had talked about Mexican immigrants, about immigrants generally."

But the percentage of eligible Latinos who voted that year was lower than in the previous two presidential elections. "Is it possible that the same dynamics are at place this year? We don't know – it remains to be seen," Lopez said. 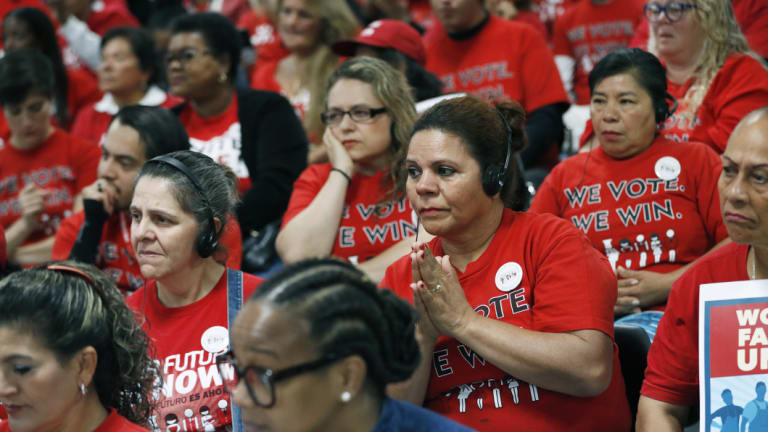 The Democrats need heavy Latino support to win several senate races and take back control of the House. Credit:AP

Nationally, the number of Hispanics eligible to vote this November is at a record-high of 29 million, Pew found – but that doesn't mean more will vote. Midterm Hispanic turnout has been dropping for the past decade, and hit a record-low of 27 per cent of eligible voters in 2014.

There are some signs that Hispanic voters could be more engaged this time. Fifty-two per cent said they've given the midterm "quite a lot" of thought, up from 35 per cent before the 2014 midterm and 32 per cent in 2010.

The open House seat in southern New Mexico, Republican Representative David Valadao's seat in California's Central Valley and the Texas Senate seat occupied by Republican Ted Cruz are just a few of the races that could be prime Democratic targets – if Hispanic voters show up and vote Democratic on Election Day, according to Kyle Kondik, the managing editor of Sabato's Crystal Ball, which studies election trends.

Kondik said Democrats shouldn't be pinning their hopes on a surge of Latino voters.

"It seems like in the places where Democrats are heavily reliant on Hispanic voters, those races have not necessarily developed in the ways that Democrats have hoped, in part because … (Hispanic voters) are just a lower turnout group in general, particularly in midterms," Kondik said.

Because of this trend, districts that should be flippable, such as Republican Representative Will Hurd's seat along the Texas-Mexico border, appear to be relatively safe for Republicans, Kondik said.

Democrats have better prospects in suburban districts where college-educated white voters appear to be turning on the president, Kondik has found.

Democrats have dedicated $25 million to turning out minorities, women and younger voters.

"Turning out Latino Democratic voters will be key to our victory," said Democratic Congressional Campaign Committee spokesman Javier Gamboa. "The DCCC was on (the) ground in diverse swing districts talking to voters and building lasting relationships with the grassroots within days of President Trump's inauguration."

Higher Latino turnout would not necessarily be a boost for Democrats in every race. Older Hispanic voters with "deeper roots" in the US tend to be more conservative than newer arrivals, Kondik said.

In Florida, where more than half of Cuban-American voters voted for Trump in 2016, Goveronor Rick Scott is making inroads in the Hispanic community in his bid to oust Democrat Bill Nelson from the Senate.

In the state's 27th Congressional District, Republican Maria Elvira Salazar is attracting Hispanic voters as she works to replace retiring Representative Ileana Ros-Lehtinen as one of the GOP's few Hispanic congresswomen.

Republicans are confident Hispanic voters will back their candidates.

"Hispanic voters value a strong economy, good-paying jobs and economic opportunity as much as any other demographic group," said Jack Pandol, a spokesman for the National Republican Congressional Committee. "Republicans across the country are warning that under Democratic control, voters will see major tax hikes and the kind of sluggish economy they became accustomed to under the last president."