France’s Marine Le Pen has called for a ‘powerful’ far-right lobby in the European Parliament after exit polls showed her on course to win the contest in France.

The populist leader declared a ‘victory for the French people’ as early estimates showed her set to defeat President Emmanuel Macron’s party – amid predictions of a populist surge across the continent.

As exit polls start to come in from across the 28-nation ballot, the major parties were embarrassed in Germany as exit polls showed Angela Merkel’s CDU slumped to 28 per cent.

Her SPD coalition partners fell behind the Greens – while also losing control of the state of Bremen for the first time in 73 years – and the anti-immigrant Alternative for Germany (AfD) party was set to make gains. 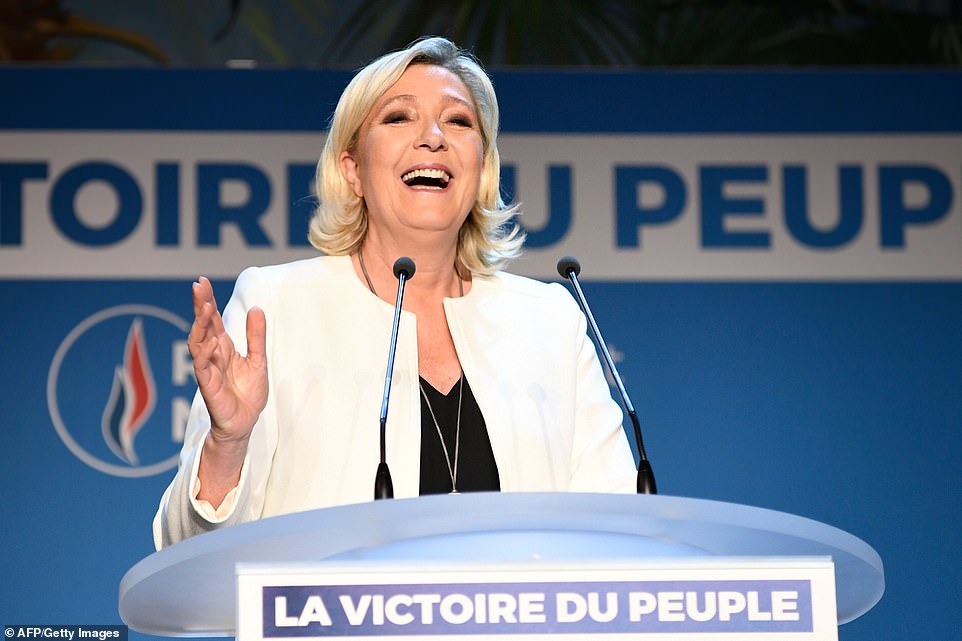 Exit polls in the ‘Gilets Jaunes’ native France show Marine Le Pen’s National Rally in front with 23.2 per cent, President Emmanuel Macron’s En Marche party just behind with 21.9 per cent and The Greens with 12.8 per cent 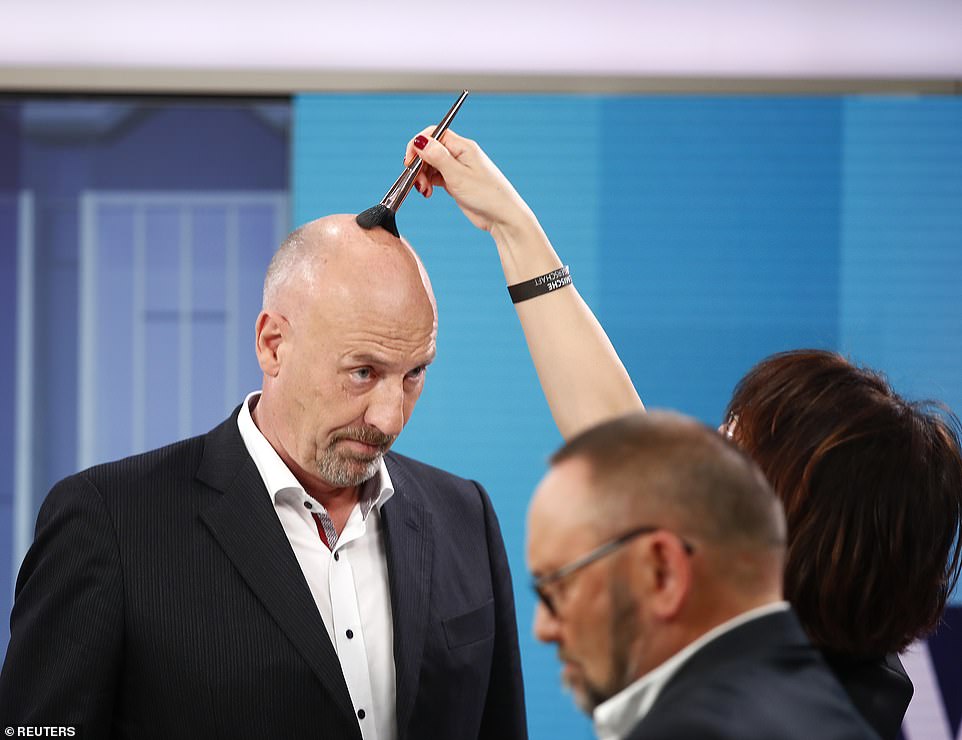 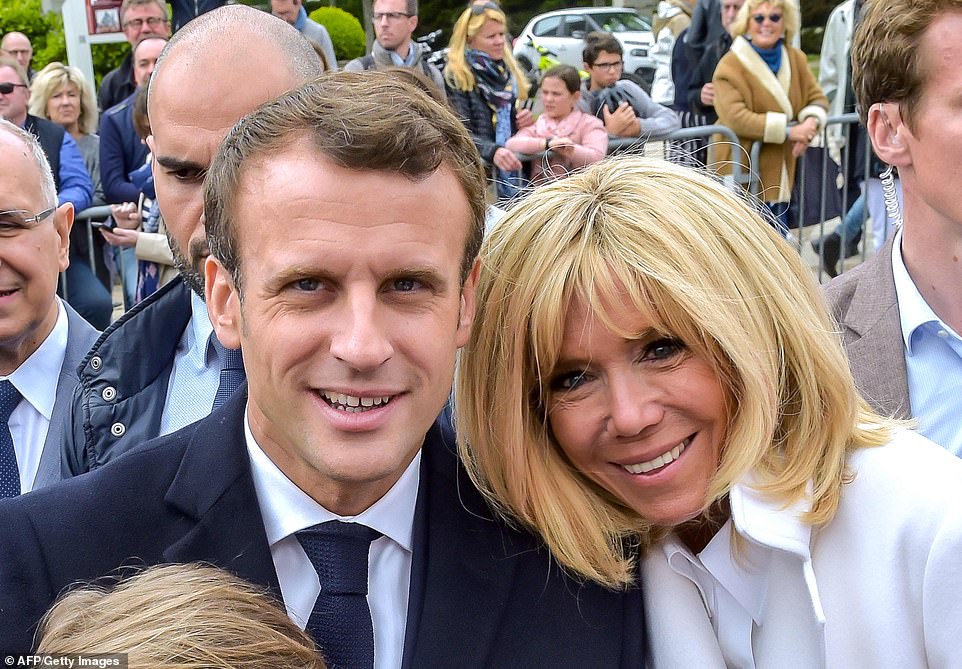 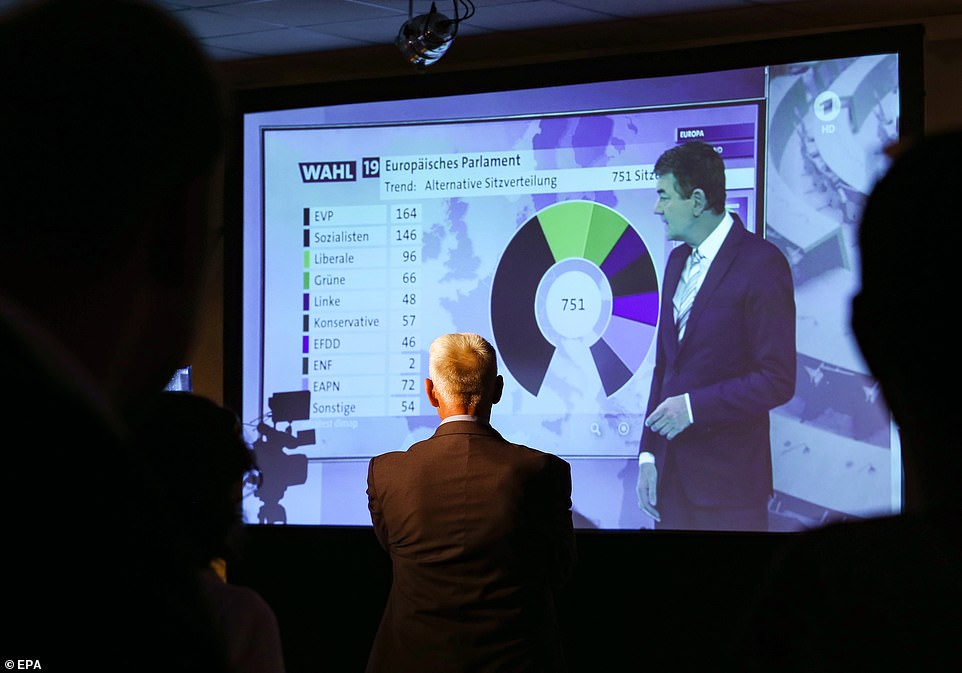 Supporters of the far-right Alternative for Germany (AFD) party watch as the exit polls come in, they show an improved result for AFD since their first election in 2014 – with 10.5 per cent of the vote

The centre-right European People’s Party (EPP) is expected to remain the largest party in the EU Parliament with 173 of 751 seats, according to the first European Parliament estimate.

But Eurosceptic parties are expected to perform strongly across the continent – while environmentalist party leaders are also hailing a possible ‘green wave’ in Europe.

The European of Nations and Freedom group, which combines populist and far-right parties in countries like France and Italy, is tipped to secure 57 seats, up 20 from five years ago.

Declaring victory in France, Le Pen said the expected result ‘confirms the new nationalist-globalist division’ in France and beyond.

She immediately expressed hope the election could foreshadow her party’s victory in France’s 2022 presidential election, after she lost out to Macron in 2017.

Macron has been under severe pressure in recent months amid long-running and often violent Yellow Vest protests against his government.

But the score of the National Rally, if confirmed, would represent a mixed picture for the 50-year-old Le Pen: her party might end up losing ground since European elections in 2014 when it finished top with 24.9 per cent.

In a first reaction to the exit polls, an aide to Macron called the results as indicated by the exit polls ‘respectable’ and suggested there would be no major policy changes as a result. 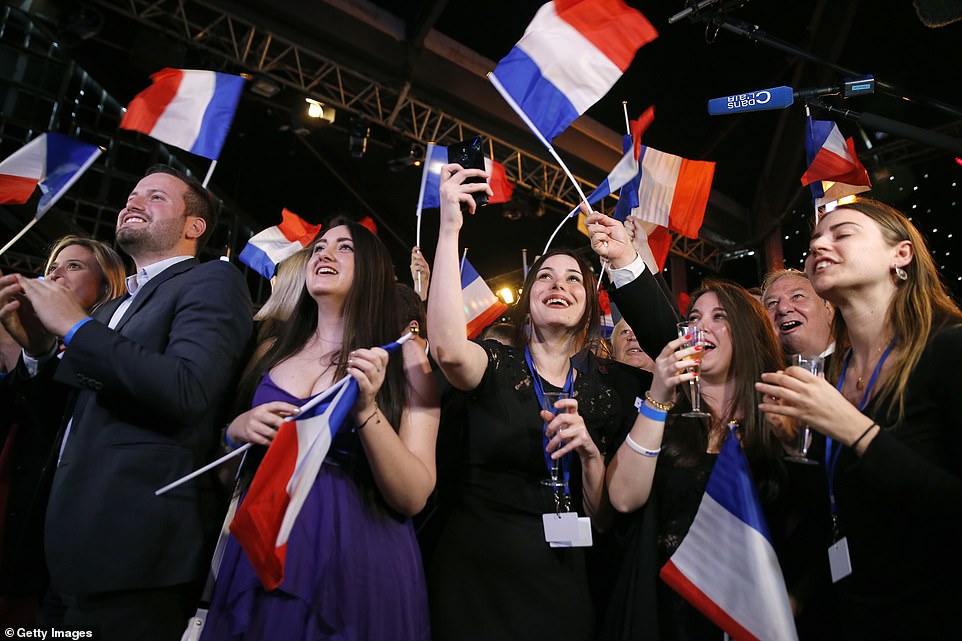 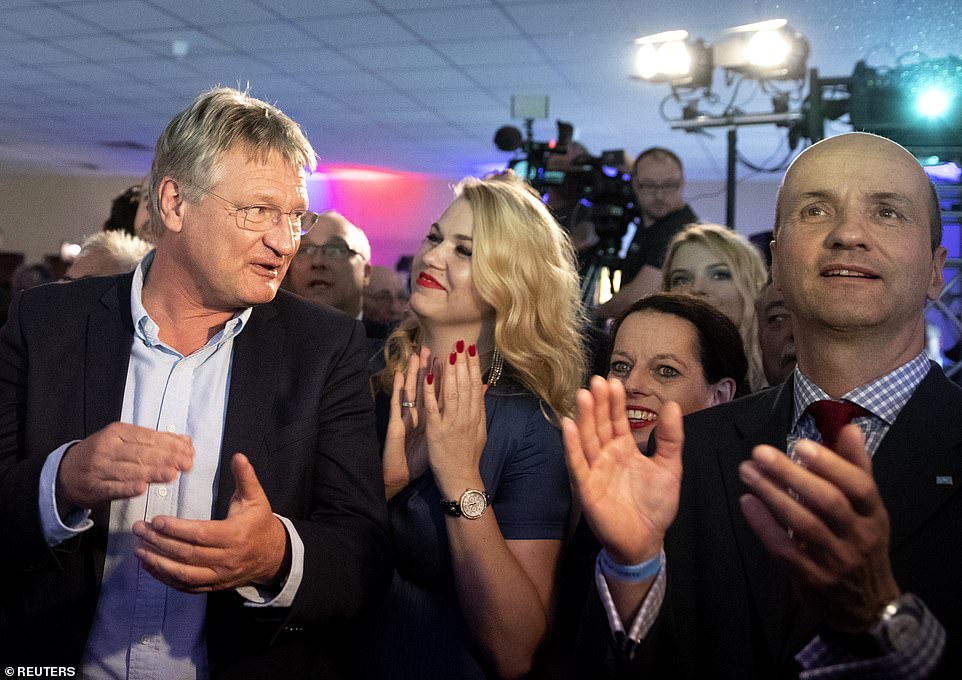 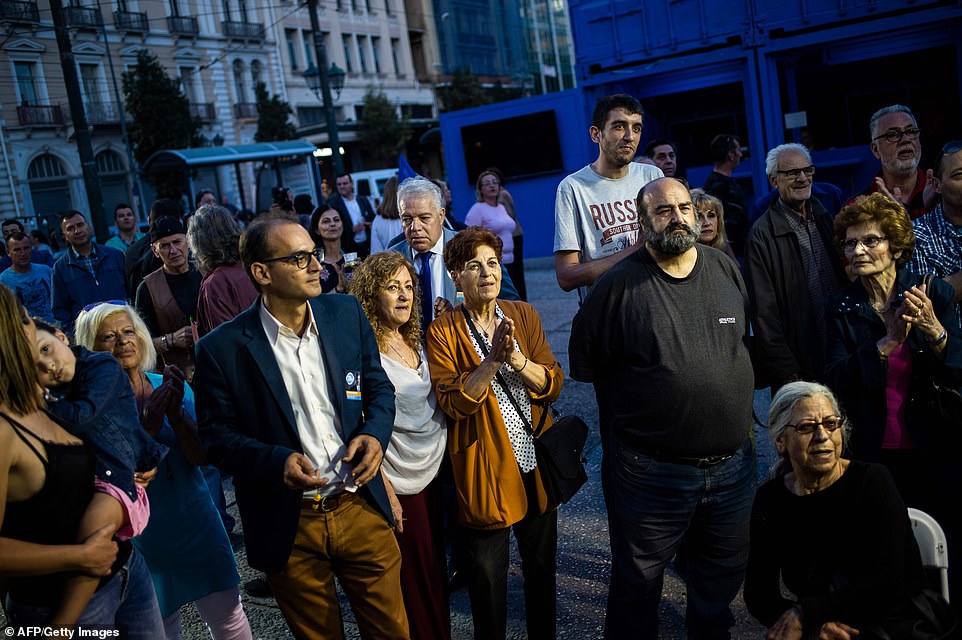 Supporters of the New Democracy opposition party, which has made significant gains over the ruling Syriza watch the exit polls results in central Athens

Hungary’s prime minister said he hoped the European Parliament election would bring a shift toward political parties that want to stop migration.

Viktor Orban was expected to win around 56 per cent of the vote, state television reported, with the Socialists and leftist Democratic Coalition far behind.

Speaking after casting his vote in Budapest, Orban said the issue of migration ‘will reorganize the political spectrum in the European Union.’

Orban, whose Fidesz party had its membership in the Europe-wide EPP suspended because of concerns about Hungary’s democracy, said Fidesz would want to stay in the EPP only if it can influence the group’s future strategy.

In the UK Nigel Farage and his Brexit Party are expected to secure a historic victory when votes are counted from 10pm this evening, crushing the Tories after months of chaos over Britain’s withdrawal.

An exit poll in Poland shows the nationalist conservative ruling Law and Justice party as the biggest vote-getter in the country’s European Parliament election, with more than 42 per cent of the vote.

In Italy Matteo Salvini’s far-right League is also expected to poll well, and exit polls have indicated the Flemish far-right is set for a strong showing in Belgium. 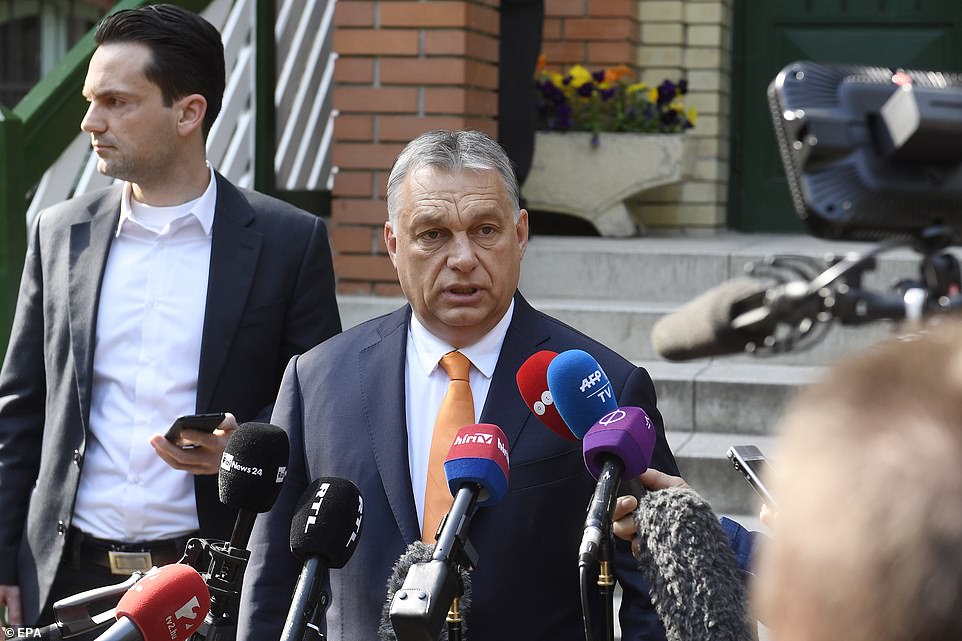 Hungarian leader Viktor Orban speaks to the press after voting in Budapest. Exit polls predicted he would win the election

However, Eurosceptics were not on the march everywhere. In Romania, pro-European parties inflicted a serious defeat on the country’s ruling Social Democrats, exit polls suggest.

Early projections suggest Green politicians will secure 71 seats in the 751-seat parliament, up from 52 seats five years ago, with good results for environmentalists in France, Germany and Ireland.

The Green co-leader in the assembly, Ska Keller, says ‘the green wave has really spread all over Europe and for us that is a fantastic result.’

In Germany, the Greens were set to almost double their support, reaching more than 20 per cent and taking second place ahead of the SPD.

In Austria, Chancellor Sebastian Kurz said he was ‘invigorated’ by a projection showing a big win for his centre-right party after a week in which his governing coalition collapsed. 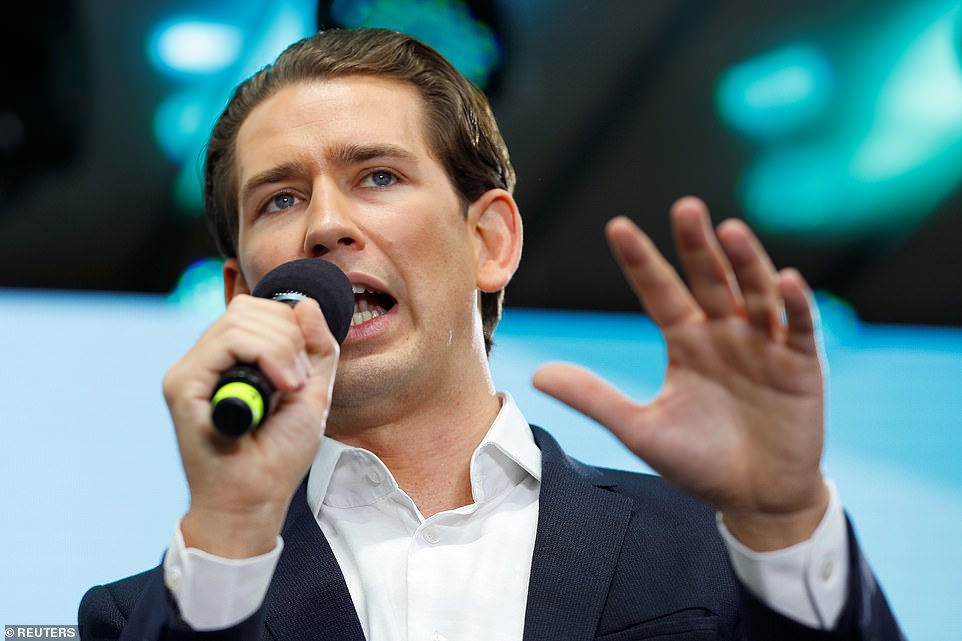 Government officials in Greece played down their exit polls, with the New Democracy Party emerging with an 8.5 per cent lead over the ruling party Syriza.

The socialist Movement for Change is projected to win around seven to nine per cent while the extreme right Golden Dawn and the Communist party are expected to get between five and seven per cent each.

Police on horseback patrolled the historic centre and scuffles broke out in different areas and several people were detained.

Belgium is holding a general election on Sunday as well as the European elections.

The full European results are coming in overnight with some 427million people eligible to vote.