‘Give me an atom bomb and I’ll wipe Holland off the face of the earth,’ vows leader of Pakistani Islamist group in response to Prophet Muhammad cartoon competition

The leader of a Pakistani Islamist group vowed to ‘wipe Holland off the face of the earth’ with a nuclear attack in response to a Prophet Muhammad cartoon competition being held in the country.

‘If they give me the atom bomb, I would remove Holland from the face of the earth before they can hold a competition of caricatures,’ he said, according to the Times of India.

‘I will wipe them off the face of this earth.’ 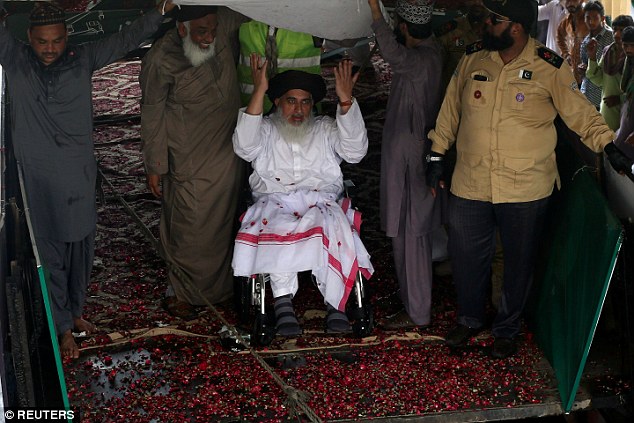 Khadim Hussain Rizvi, the leader of the Tehreek Labbaik Pakistan (TLP), vowed to ‘wipe Holland off the face of the earth’ with a nuclear attack

He was referencing a competition of cartoons depicting the Prophet Muhammad announced by The Freedom Party of Dutch anti-Islam politician Geert Wilders last month.

The party said the plan to hold the competition in the party’s secure offices in Dutch Parliament had been approved by the Dutch Counter-terrorism Agency NCTV.

Wilders’ Freedom Party is the leading opposition party in parliament after coming in second place in elections last March.

He has called for the Koran to be banned, and says Islam is a totalitarian faith.

‘Freedom of speech is threatened, especially for Islam critics,’ Wilders said in a statement.

‘We should never accept that. Freedom of speech is our most important freedom.’ American cartoonist Bosch Fawstin, winner of a similar contest in Garland, Texas, in May 2015, has been asked to judge the Dutch contest, which will be held later this year.

Earlier in 2015, Islamist gunmen killed 12 people at the Paris offices of the French secularist satirical newspaper Charlie Hebdo, which had printed cartoons of the Prophet.

In 2005, the publication in a Danish newspaper of a dozen cartoons depicting the Prophet led to violent protests across the Muslim world.

Meanwhile, the TLP is a political party known for its vehement opposition to changes in Pakistan’s blasphemy laws.

Last November, more than 2,000 TLP members staged a three-week long sit in at Faizabad – the intersection of the twin cities of Islamabad and Rawalpindi – protesting a small change to the oath taken by parliamentary candidates.

It would have seen them say ‘I believe’ instead of ‘I solemnly swear’ that Prophet Muhammad is the final prophet.

The government ultimately rolled back the change in the Election Act, claiming it had been a clerical error.