At least 30 are killed including children in blast when ‘ISIS’ suicide bomber tries to enter a polling station in Pakistan, as Imran Khan vies for power in the country’s ‘dirtiest election’

At least 30 people have been killed and 35 wounded in a suicide attack near a polling station in the southwestern Pakistani city of Quetta as millions vote in a nationwide election today.

‘[The bomber] was trying to enter the polling station. When police tried to stop him he blew himself up,’ a local administration official in Quetta, Hashim Ghilzai, told AFP.

Dr Wasim Baig, spokesman for the Sandeman Provincial Hospital in Quetta, said the death toll had risen to 30 after two people succumbed to their injuries. Earlier, officials had said 28 people were killed and more than 30 injured.

ISIS has claimed responsibility for the mass murder through its Amaq propaganda unit.

Two children and five police officers are thought to be among the dead.

The province of Balochistan, of which Quetta is the capital, has already been hit by several bombings during the brief but acrimonious election campaign.

This month, 153 people were murdered in a devastating blast claimed by ISIS fanatics. It was Pakistan’s deadliest ever suicide attack. 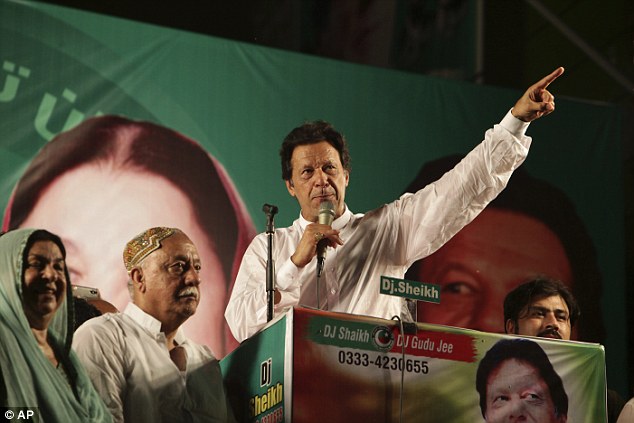 Polls opened Wednesday in a tense, unpredictable Pakistani election that could be former World Cup cricketer Imran Khan’s best shot at power, after a campaign marred by allegations of military interference and a series of deadly attacks

An earlier attack in the province on Wednesday left one policeman dead and three wounded when a hand grenade was thrown at a polling station in the village of Koshk, in Khuzdar district.

Polls opened today in a tense, unpredictable Pakistani election that could be former World Cup cricketer Imran Khan’s best shot at power, after a campaign marred by allegations of military interference and a series of deadly attacks.

The vote is meant to be a rare democratic transition of power in the nuclear-armed country which has been ruled by the powerful military for roughly half its history.

But it has been dubbed Pakistan’s ‘dirtiest election’ due to widespread accusations of pre-poll rigging by the armed forces, with Khan believed to be the beneficiary.

The contest has largely boiled down to a two-way race between Khan’s Pakistan Tehreek-e-Insaf (PTI), and the incumbent Pakistan Muslim League-Nawaz (PML-N) of ousted premier Nawaz Sharif, whose brother Shahbaz is leading the campaign.

The first voter to enter a polling station in the eastern city of Lahore was a woman, business executive Maryum Arif, who told AFP she planned to vote for the PML-N as ‘it has served Pakistan’.

She was followed shortly after by Shahbaz Sharif, who called on Pakistanis to ‘get out of their homes and … change the fate of Pakistan’ before casting his own vote and flashing a victory sign.

Up to 800,000 police and military forces have been stationed at more than 85,000 polling stations across the country, with concerns for security after a string of bloody militant attacks in the final weeks of the campaign that have killed more than 180 people, including three candidates. 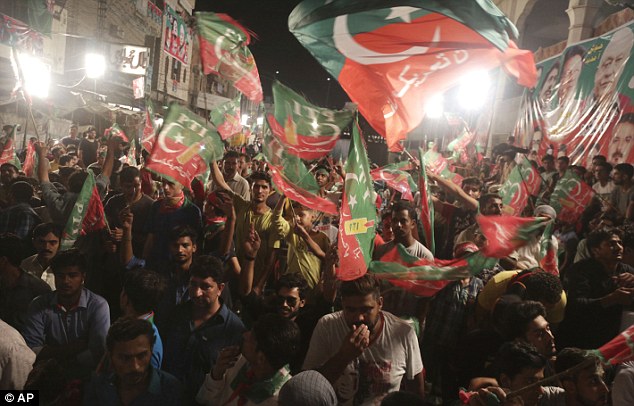 Early Wednesday one policeman was killed and three wounded in a hand grenade attack on a polling station in southwestern Balochistan, Pakistan’s poorest and most restive province, local police there told AFP.

No group has yet claimed the attack, but Balochistan suffers from Islamist and separatists insurgencies and was the scene of several campaign bombings, including a devastating attack claimed by the Islamic State group which killed 153 people this month.

Security fears did not appear to deter Arif, the first voter at the polling station in Lahore, who told AFP that ‘the law and order situation is fine here’. Heavy contingents of police and military could be seen ahead of polls opening.

In Bani Gala, a suburb of the capital Islamabad, media massed outside the polling station where Khan is due to cast his vote.

Khan is campaigning on populist promises to build a ‘New Pakistan’, vowing to eradicate corruption, clean up the environment and construct an ‘Islamic welfare’ state.

Nawaz Sharif, dubbed the Lion of Punjab, was thrice prime minister but never completed a term.

His latest stint ended last year when he was ousted by the Supreme Court over corruption, and later banned from politics for life.

His woes reached their peak earlier this month when he was sentenced in absentia to 10 years in prison. 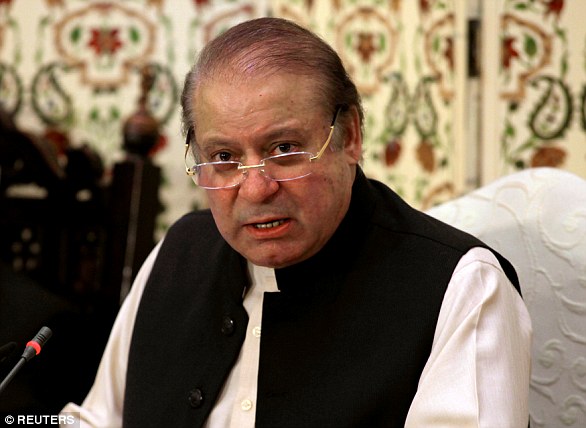 Nawaz Sharif, dubbed the Lion of Punjab, was thrice prime minister but never completed a term

Sharif spectacularly returned to Pakistan from London a week later and was arrested.

Analysts say he has returned to fight for his political life to boost his Pakistan Muslim League-Nawaz (PML-N) party’s stumbling campaign.

Seen as a combative and tenacious figure, Sharif claims he is being targeted by the military – with which he was once close.

The dispute is largely attributed to his desires to shift power to the civilian government and seek warmer diplomatic relations with arch-rival India.

The army, considered the country’s strongest institution, has ruled Pakistan for roughly half its nearly 71-year history, and is widely believed to control foreign and defence policy.

It has been broadly accused by the media, analysts, activists and politicians of what one think tank called a ‘silent coup’ against the PML-N, and in favour of opposition stalwart Imran Khan.

Several cases of kidnappings, threats and pressure against the media and political activists have been reported, and diplomats have voiced concern over censorship allegations ahead of the polls.

The army denies the claims, saying it has ‘no direct role’ in the election.

A cricket hero-turned-politician, Khan has become the main opposition leader in recent years and makes no secret of his ambition to become prime minister.

Known mainly in the West as a talented sportsman and infamous playboy, he presents a significantly more conservative and devout face to Muslim-majority Pakistan.

His Pakistan Tehreek-e-Insaf (PTI) party, founded in 1996, governed northwestern Khyber-Pakhtunkhwa province for five years but had to settle for a handful of seats nationally after the 2013 election. 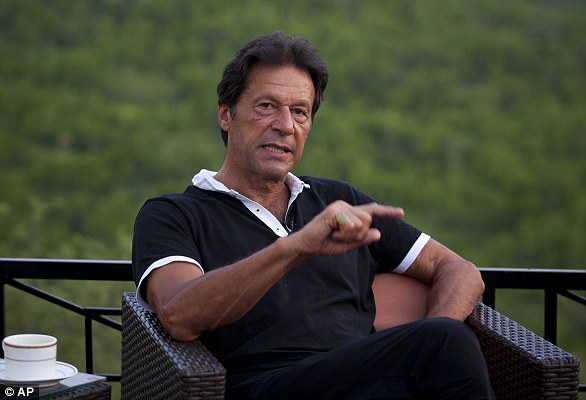 Some call Imran Khan (pictured) ‘Taliban Khan’ because of his repeated calls for talks with violent insurgent groups. He has also been criticised for pandering to Islamist hardliners over blasphemy

The fall of Sharif and the PML-N’s floundering campaign represents Khan’s best chance yet to become prime minister, even if an outright majority remains uncertain.

Critics consider him unfit for office. Some call him ‘Taliban Khan’ because of his repeated calls for talks with violent insurgent groups. He has also been criticised for pandering to Islamist hardliners over blasphemy.

Others openly accuse him of having links to the army.

Nawaz’s younger and less charismatic brother, Shahbaz became president of the PML-N after his elder sibling was ousted, and is leading the party’s campaign.

His quieter style has been overshadowed by Nawaz’s loud quarrel with the military. But he occupies a key position in Pakistani politics, having spent more than 10 years as chief minister of Punjab, home to more than half of the country’s population of 207 million.

Shahbaz, also an influential businessman, is reputedly less stubborn when it comes to the military, and therefore more acceptable to the generals than Nawaz.

There has long been speculation that the two brothers have clashed over their political differences, but they have never corroborated the claims.

Bilawal Bhutto-Zardari is the son of the charismatic Benazir Bhutto, who was twice elected prime minister and assassinated in 2007. His grandfather Zulfikar Ali Bhutto, also a prime minister, was ousted in a coup and executed in 1979.

At 29, Bhutto-Zardari has little experience and the chance of election victory for his family’s Pakistan Peoples Party is deemed almost nil – though he could become kingmaker in a coalition if the PML-N or the PTI fail to win an outright majority.

The PPP once dominated Pakistani politics but is now in decline, facing a strong challenge even in its strongholds in southern Sindh province.

Bilawal’s father Asif Ali Zardari, nicknamed ‘Mr 10 percent’ by many in Pakistan because of numerous accusations of corruption, has previously been president of Pakistan.

There is speculation Asif, believed to be the main decision-maker in the PPP, could seek the post again – or demand other concessions – in any coalition deal.

But the erstwhile playboy’s campaign has been dogged by widespread accusations he is benefitting from the support of the country’s powerful security establishment, with the media, activists and think tanks decrying a ‘silent coup’ by the generals.

The military has rejected the accusations, saying it has no ‘direct role’ in the electoral process.

Khan has also raised eyebrows in recent weeks by increasingly catered to hardline religious groups, particularly over the inflammatory issue of blasphemy, sparking fears a win for PTI could embolden Islamist extremists.

The PML-N, on the other hand, says it is the target of the alleged military machinations, with candidates under pressure and Nawaz Sharif ousted from power last year and jailed over a corruption conviction days before the vote, removing Khan’s most dangerous foe from the race.

More than 19 million new voters, including millions of women and young people, may prove decisive in the close race.

Gilani said many remain undecided: ‘It’s still up for grabs.’

The campaign season has also been marred by the expansion of far-right religious parties, as well as the attacks, which have fuelled concerns that Pakistan may be losing ground on hard-fought security gains in recent years. 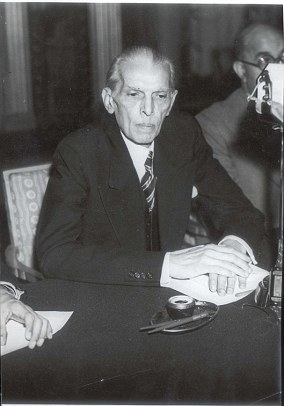 Pakistanis are voting in the third consecutive general elections to take place without political upheaval, a crisis or a military intervention.

A timeline of major political and other events in Pakistan’s history:

–Aug. 14, 1947: Pakistan emerges as a sovereign state after getting independence when the departing British left India and split the subcontinent;

–Oct. 16, 1951: Pakistan first prime minister, Liaquat Ali Khan, is assassinated in a gun attack at a rally in the city of Rawalpind, triggering political instability;

–Oct. 27, 1958: Ayub forces the president to step down; Mirza is sent to exile in Britain where he later dies; Ayub declared himself president; 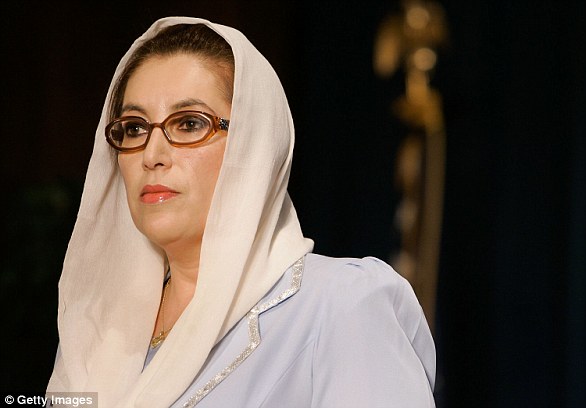 In 2007, Benazir Bhutto was assassinated in a gun-and-bomb attack after addressing an election rally in Rawalpindi

–April 4, 1979: Bhutto is hanged after the Supreme Court upholds death sentence on charges of conspiracy to murder and Gen. Zia rejects a mercy petition; Bhutto’s daughter, Benazir Bhutto, takes up her father’s legacy;

–Aug. 6, 1990: Benazir Bhutto’s government is dismissed amid charges of corruption and mismanagement;

–Oct. 6, 1993: Bhutto is voted back into power after mass demonstrations lead to the early dismissal of her 1990 successor, Sharif; 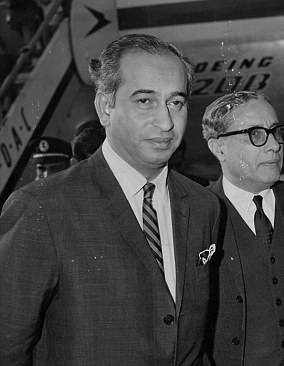 –Nov. 5, 1996: Bhutto’s government is again dismissed amid renewed charges of corruption and incompetence raised by her party’s leader, Farooq Leghari;

–Oct. 12, 1999: Army chief Gen. Pervez Musharraf ousts Sharif’s government in a bloodless coup after Sharif fails in his attempt to sack the army chief. Sharif is sent into exile after a court convicts him of conspiracy against Musharraf;

–Oct. 5, 2007: Musharraf issues a controversial national reconciliation law after striking a deal with Bhutto that paves way for elections later in the year and the return home of both Bhutto and Sharif;

–Dec. 27, 2007: Bhutto is assassinated in a gun-and-bomb attack after addressing an election rally in Rawalpindi;

–Aug. 18 2008: Musharraf resigns from his post as president under pressure;

–May 2, 2011: Osama bin Laden is killed in a U.S. Navy SEALs raid in the army garrison town of Abbottabad;

–June 19, 2012: Supreme Court disqualifies Gilani as prime minister for not complying with a court order to request a Swiss court reopen corruption cases against Zardari; 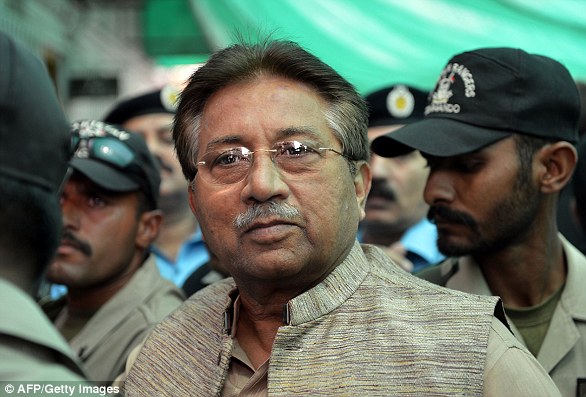 — July 28, 2017: Sharif is disqualified from office by the Supreme Court on corruption charges stemming from so-called leaked Panama papers;

–May 31: Abbasi’s government completes its term in office and elections are scheduled for July 25;

–July 6: Anti-graft tribunal convicts Sharif in absentia and sentences him to 10 years in prison, his daughter and son in-law are sentenced to lesser term;

–July 13: Sharif returns home from London where his ailing wife is in hospital; he and his daughter are arrested after landing and taken to a jail in Rawalpindi;