MANY blamed President Trump after Arizona's Democratic Party headquarters was set on fire this week — but it turns out a liberal activist may be to blame instead. 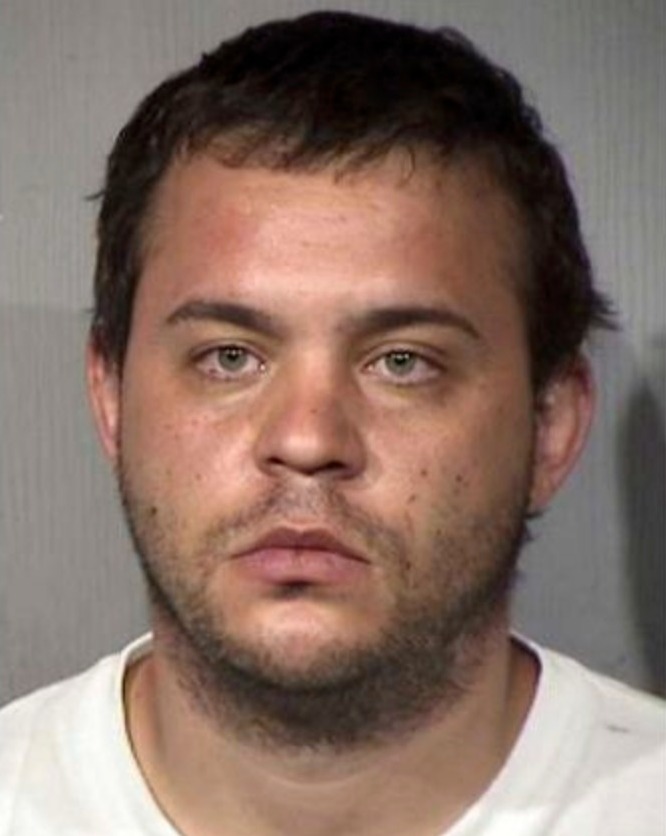 Egler, arrested on probable cause due to his social media posts admitting he was involved with the fire, had previously volunteered with the Maricopa County Democrats, whom he later expressed anger with on social media.

"The 29-year-old was a former volunteer at the office but had recently been banned from continued volunteer service," wrote the police department in a statement upon his arrest.

The burning of the Democratic Party headquarters ignited a whole slew of fingerpointing between President Trump and Democrats, who alleged the president's rhetoric was responsible for the fire. 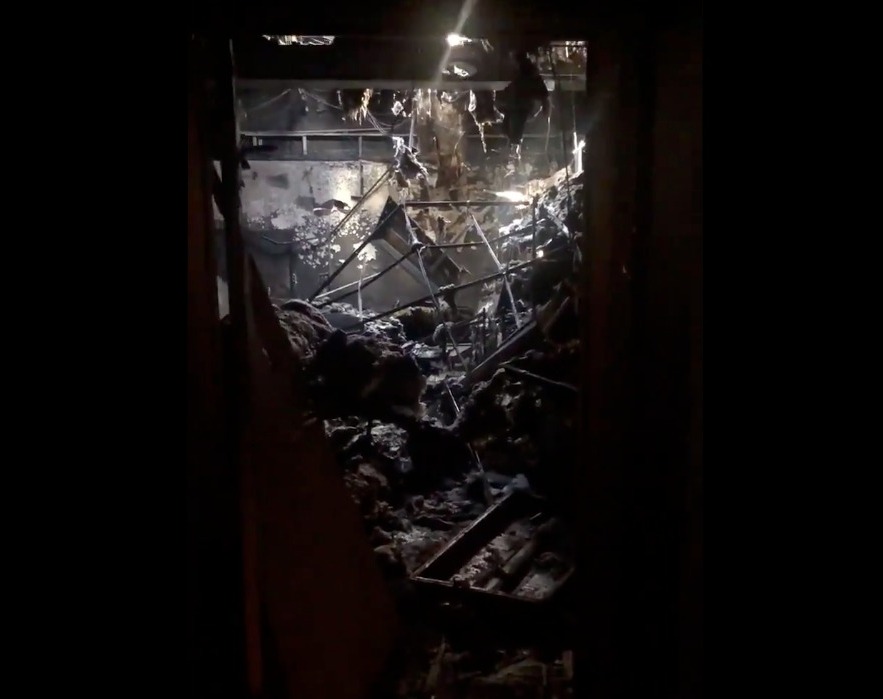 Jon Sutton, Democratic Arizona representative Tom O'Halleron's campaign manager, lit up Twitter by reminding others "the AZGOP sent a poster with bullet holes to Ann Kirkpatrick's office in 2016. When I worked here, armed protestors showed up outside regularly. I'm speechless. Their silence was complicit then and it is complicit now," followed by a jab at the president, saying "It's 100 days until an election. It is entirely reasonable that staff could be working at 1 am in that office. I frequently was. Call this what it was: ATTEMPTED MURDER."

Others more pointedly directed their blame towards Trump, including actor Willie Garson, who tweeted "They burnt down the Democratic Headquarters in Maricopa County. Because, Trump, and because Arizona," he said, followed by "act like Americans, you cult followers. Find your decency for a change, you're better than him," as well as radio personality Phil Hendrie, who tweeted "Investigators now believe this was arson. Trump is so desperate to get re-elected, so pathetically desperate even if voters don’t want him, he’s doing everything and anything..provoking riots, reopening an economy during a plague, setting fires.." 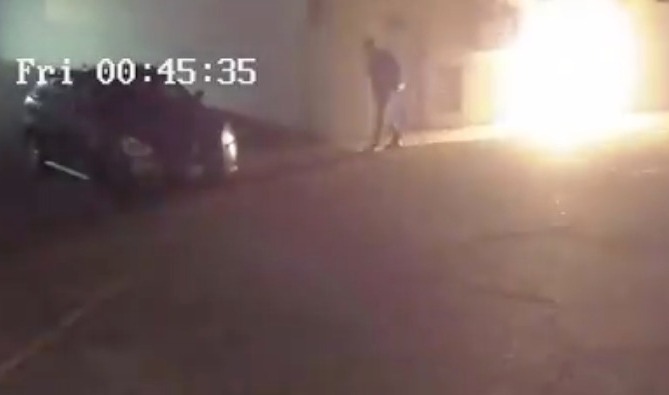 Another video shared by the Maricopa County Democrats shows the damage the fire inflicted on their building, barely anything salvageable as the camera pans throughout a smoke-filled room with wires and beams hanging down below. In the tweet, the county wrote "Our building has been completely ruined. The authorities are continuing their investigation and are labeling this as arson. We are saddened by this act of violence but not deterred. We will flip #MaricopaCounty blue this November."

The fire ruined historical political memorabilia and came ahead of Tuesday's primary election. "The fire was extinguished but not before causing substantial damage to the building," wrote the police department.

Elger is still a registered Democrat according to the Arizona Secretary of State.

"The defendant became upset with the Maricopa County Democrats for not allowing him to volunteer and in retaliation, deliberately set fire to the Maricopa County Democrats Office," Elger's complaint read. Elger was arrested on a Class 2 felony with one count of arson of an occupied structure. In the probable cause statement, police say Elger borrowed a relative's 2009 Pontiac Vibe to drive to the building, broke the building's glass doors and placed "an unknown incendiary device inside of the building" before he "lit it on fire." 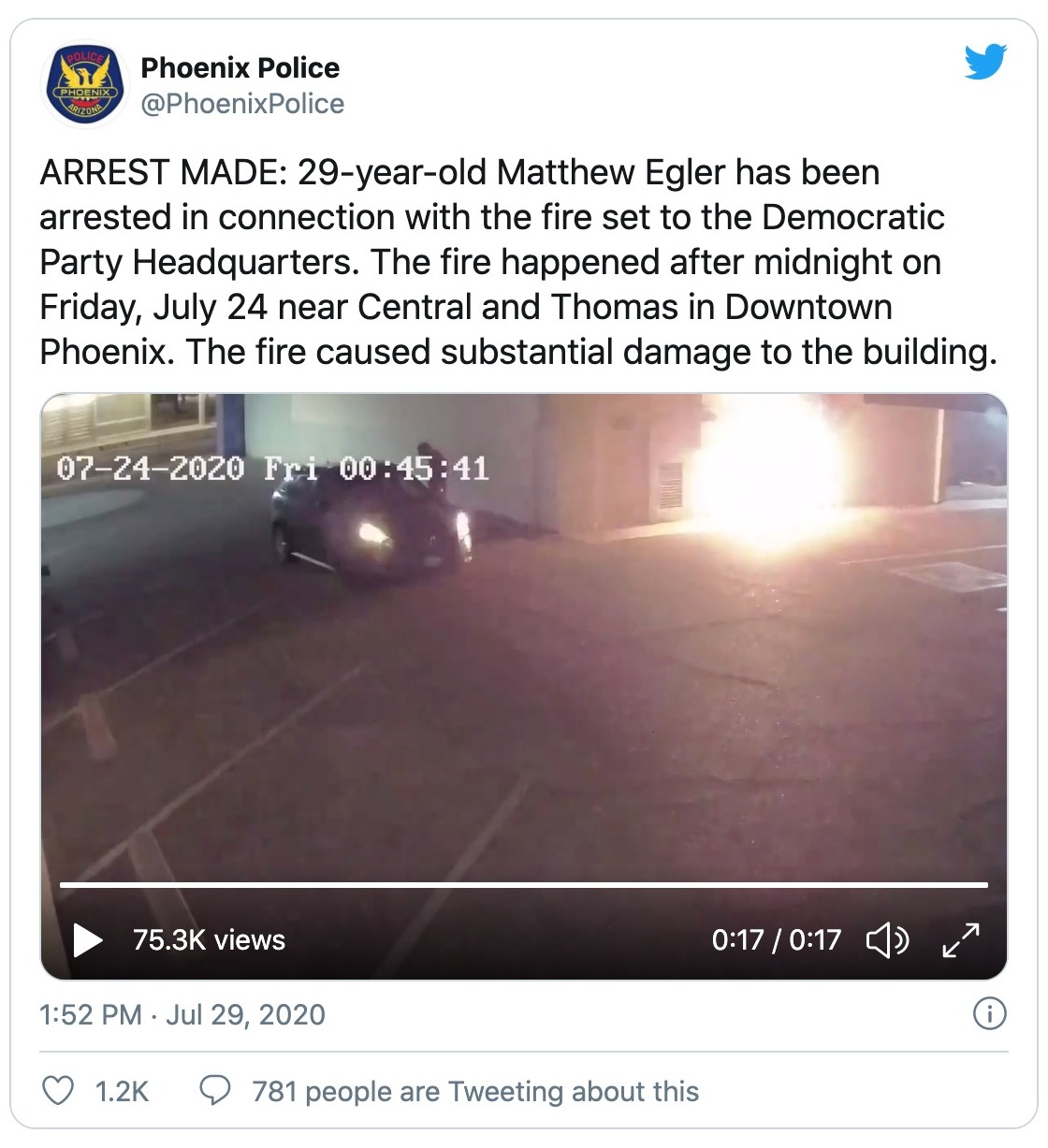 Elger had previously been on the Democrats' radar for nefarious reasons. In March 2017, former vice-chair of the Legislative District 22 Democrats Matthew Lewandowski had asked for a protective order against Elger in Peoria Municipal Court, alleging Elger had been harassing him.

"The bottom line that came out of it was I was denied because they said it was a First Amendment issue and a party issue that should be handled by the party," Lewandowski said to The Arizona Republic. "Talking with my wife and other people, I said it was a shame no one tried to look at the problem back then."

"I BOMBED THIS BUILDING LISTEN TO WHAT IM SAYING," he wrote in a tweet containing an article to the July 24 fire.

State lawmakers told Arizona Central Elger had been emailing them hours before the midnight blaze, demanding an emergency session to change the election dates because he claimed he had an intimate relationship with Ivanka Trump and believed he was going to be chosen as the next Republican vice presidential nominee. Republican Representative T.J. Shope forwarded the emails to the state Department of Public Safety.

Democrats had doused the flames of political rhetoric by donating to the damaged building. Jevin D. Hodge, a candidate for Maricopa County Board of Supervisors, tweeted photos of damage the fire had left and asked for support in getting the headquarters back up and running. Former Democratic presidential candidate Pete Buttigieg retweeted, saying "Very sorry to see this – my desk used to be right through that door, back in 2004. Glad no one was hurt, and I know we can count on supporters to make sure AZ/Maricopa Dems are back up and running quickly as you continue to Turn Arizona Blue."

Maricopa party establishment leaders had thanked their supporters for being so quick to help, but added they were "deeply saddened and shocked by today's news, but appreciate the swift action by law enforcement to ensure that the suspect is in custody."

Arizona Democratic Party Chairwoman Felecia Rotellini and Maricopa County Democratic Party Chairman Steven Slugocki wrote in a joint statement, "as we work to navigate the process of finding a new home, we want to express our humble thanks and deep appreciation to all those who have reached out during this challenging time and have made generous donations."

They continued, "We thank you from the bottom of our hearts."

More than tens of thousands of dollars had been donated to the recovery fund. In it, they wrote "This donation link is specifically to help our organization recover the essential operation items and technology we lost to this devastating fire including laptops, tablets, phone banking equipment. Unfortunately, we will not be able to replace the historic election memorabilia or years' worth of candidate and organizational documents that were destroyed."

"While this poses new challenges in an already critical election, we want to assure you that this will not hinder our efforts to elect Democrats across the county. We will continue to lead and we are ready to win," it concluded.

Elger is being held on $75,000 bail, with his arraignment scheduled for August 4, election day.