Two of opposition leader Michael O’Brien’s senior front bench colleagues have given him their backing ahead of a party room meeting where MPs are expected to vent their frustration about the party’s performance.

Leader of the opposition in the upper house David Davis, an ally of Mr O’Brien, and planning spokesman Tim Smith, a factional opponent, said they had confidence in their leader. 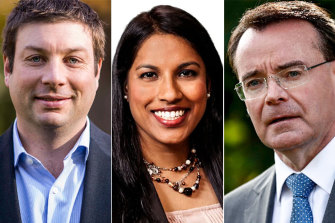 Mr Smith, who has a frosty relationship with Mr O'Brien, gave one-word answers as reporters asked whether he had confidence in Mr O’Brien, whether he would face a spill motion on Tuesday and whether he would be toppled next year, answering them, respectively, “yes”, “no”, and “no”.

Liberal MPs first in-person party room meeting since the start of the pandemic began at 8.45am after five right-wing backbenchers demanded Mr O’Brien hold the meeting in person rather than via Zoom.

The MPs intended to express their discontent about the party’s performance and electoral popularity to the party leadership.

The MPs will also finalise the party’s position on gay conversion therapy laws set to be introduced to Parliament.

Ahead of the meeting, former federal Liberal vice-president and influential party figure Karina Okotel – a religious hardliner – emailed all Victorian Liberal state MPs suggesting it should be legal for people to attend prayer groups to reverse their sexuality but illegal for extreme medical measures such as shock therapy to be used to achieve the same ends.

The Andrews government laws would ban both methods.

In his reply to the email, which he sent to all the recipients of Ms Okotel's original message, Mr Smith asked Mr O’Brien why she had not been expelled from the party.

Ms Okotel is filing an official complaint to the Liberal Party’s administration alleging Mr Smith’s email, which he sent twice, amounted to bullying and harassment.

The proposed Victorian legislation goes further than a similar law passed earlier this year in Queensland in that it bans certain religious practices.

The decision to also include harmful “religious-based practices” and “prayer-based practices” in the bill – such as exorcisms, deliverance or spiritual guidance designed to overcome same-sex attraction – has alarmed proponents of religious freedom.

Mr Smith said that Ms Okotel was trying to “browbeat” MPs to oppose the laws and said Liberals should not allow a conscience vote on the matter.

“I think this is pretty cut and dry. I think that you are what you are,” he said.

“I read reports about people praying or somesuch to stop people from being gay or some rubbish. I mean this is nonsense … you are what you are.

“This is actually quite insane. It’s demented. You are what you are … We are all made in the image of God. Can I make that point as a very very bad Anglican.”