More than 75,000 people have been driven from their homes and 510 killed in the weeks-long battle for Tripoli. 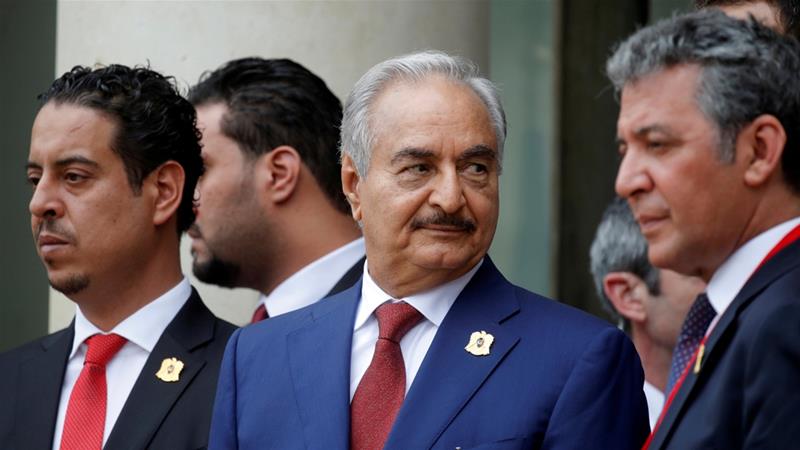 Libyan renegade military commander Khalifa Haftar, who is leading a military offensive against the government in Tripoli, said in an interview published on Sunday he will continue fighting until militias in the city laid down their arms.

Haftar’s Libyan National Army (LNA) began an offensive in early April to take the capital from fighters loyal to Prime Minister Fayez al-Sarraj’s Government of National Accord (GNA), which is recognised by the United Nations.

The LNA, which is allied to a parallel government in the east, has not been able to breach the southern defences of Tripoli.

Haftar justified the offensive last month by saying he was fighting against “private militias and extremist groups” who he said were gaining influence under al-Sarraj.

“Of course a political solution is the objective,” Haftar told the Journal de Dimanche newspaper in France. “But to return to politics, we need to finish with the militias. The problem in Tripoli is a security one.”

He offered an amnesty to fighters in Tripoli who laid down their arms, saying they would be allowed to “return home safe and sound”.

French President Emmanual Macron asked Haftar in a meeting held in Paris last week to take a public step towards a ceasefire without much luck, a French official told Reuters news agency.

Haftar also took aim at UN mediator Ghassan Salame who has warned that the country is “committing suicide” because of the conflict that six to 10 foreign states are involved in.

“Salame is making irresponsible statements,” Haftar said. “He wasn’t like that before. He has changed from an impartial and honest mediator, he has become a biased one.”

Salame warned Haftar’s offensive is “just the start of a long and bloody war”.

More than 75,000 people have been driven from their homes in the latest fighting and 510 have been killed, according to the World Health Organization (WHO).

More than 2,400 people have also been wounded, while 100,000 people are feared trapped by the clashes raging on the outskirts of Tripoli.