I 'd been swaddled in a cold, sopping-wet trash bag for approximately 20 hours, listening to six other cavers shivering and breathing quietly. We were huddled close on the hard ground of a muddy crawlway, a space barely tall enough for sitting up, in an Indiana cave system.

Despite my cozy wetsuit socks and the light of a tiny tealight candle, sensation in my outer extremities was a distant memory. My mind raced. My mind was empty. Now and then, I could have sworn I heard the voices of our would-be rescuers, but there was nothing. We were deep underground, facing a reality for which experienced cave explorers prepare but hope to never encounter: an extended flood entrapment. 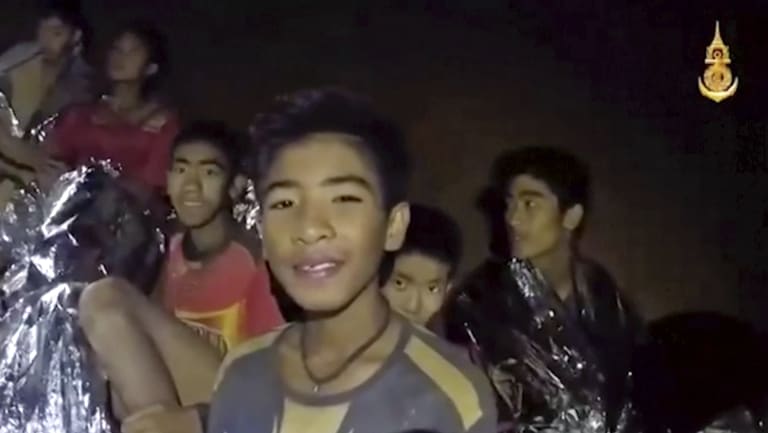 The 12 boys and their coach trapped in the Thai cave.

My story played out in December 2016, but I've been thinking about it again as I repeatedly refresh Twitter for news of a Thai youth soccer team and its coach, trapped in a cave for about two weeks. Though my story is different – we were entombed for a mere 40 hours – I know all too well what it's like to be trapped, reliant on those around you and unable to connect with those who might be able to help.

Cavers are careful people. We take calculated risks. We check the weather obsessively, never wanting to rush into danger blindly. We are well-prepared to care for ourselves and others, having learned through years of experience, mentorship and, in some cases, voluntary rescue training. We make sure to inform friends above ground of our intended destination and expected time to exit the cave. After all, we know cave rescues can be complex undertakings. But we are also human and capable of miscalculations.

On a normal-seeming Saturday, seven of us, with more than a century of combined caving experience, entered Binkley Cave in Indiana after assessing a potential rainfall of 5 millimetres as non-threatening. After several hours of one-way travel into the cave, we found ourselves quickly retreating from a wide, low crawlway when a small trickle of water nearby started to rush faster and back up into drier portions of our constricted space. We later leaned that unexpected heavy rains had dumped 100 millimetres of water on the surface during our survey trip, leaving our group unable to exit.

We sought high ground in this mid-level tier of the cave and tried to play it cool. We waited and snacked, eyeing the small stream below for any changes, minor or major. We knew it had rained outside, but how much? Had the rain stopped? Was more coming? This was the first frustrating conundrum: lack of communication with the surface. When you're stuck, as we later realised we were, you're often dependent on those outside for rescue, but contacting them is almost impossible.

When you're underground, you have just the people you're with and the stuff in your packs. Most cavers prepare to be self-sufficient for at least 24 hours, carrying gear to keep warm, light first-aid supplies, food and water. However, pack weight is always a trade-off. The more you carry, the more difficult it is to lug your pack through strenuous passages. We had placed bottles of water along our return route (to lighten our loads), though these had doubtlessly been washed away in the flood. So we emptied our supplies into a pile and were able to share granola bars, dried fruit and even some summer sausage that a fellow caver had thoughtfully packed.

When our group eventually returned to the main river route we'd need to traverse to exit, the water that had been a gentle stream on our way in was now a rushing, clod-brown torrent. It had risen more than 1.5 metres in an hour. We guessed, based on the amount of water moving through the passage, that it reached the ceiling in places along our exit route. Disappointed, we resigned ourselves to wait. Snapping into conservation mode, we shared food, water, light, body heat. We didn't laugh much or take photos. We didn't cry or lose it. We were in stasis.

Try to recall the last time you sat idle. Today, we are rarely without communication; many cavers enjoy these peaceful adventures to the quiet underground with good friends, away from life's screens and pressing concerns. But when you're trapped, being cut off no longer seems quite so desirable. I remember wondering what my husband was thinking and whether my family knew. "If only I could give them a sign," I thought. "They probably think we are all dead."

Cave rescue training, of the kind I've received through the National Cave Rescue Commission's seminars, let me play the dutiful strategist in my head, though our position offered us limited options. First, we could attempt to exit through a much longer river route, but since that passage was taking on much of the drainage, doing so meant moving through faster, more treacherous water, which would increase the risk of hypothermia, injury and further exhaustion in the partially submerged passageway. Second, we could try a shorter route with more crawling, though that entailed many of the same dangers. Third, we could send a few intrepid cavers to go out for help along one of these routes while others remained behind, but there, too, the risks were obvious, and dividing the party threatened to leave us with fewer resources.

That left us with a fourth option. Stay put, conserve resources, wait for help. Be patient. Ugh.

At least we had each other, though that brought complications of its own. Our caving group was a team, which was critical to our survival. But we were a team made up of adults with unique experiences, ideas and ability levels. If we hadn't ultimately agreed to wait patiently – and a multitude of ideas came up, ranging from reasonable to risky – it could have been a recipe for folly. We didn't formally vote or organise a "tribal council", instead making decisions organically, informed by our confidence in each other. Trusting each other also meant having faith in our surface support, believing that those above ground would figure out where we were and find a way to help. Your survival is contingent on others – fellow cavers and potential rescuers alike – and that means you're confined by your entanglement with them, too.

In the end, a team of welcome faces came to our aid as the waters were receding: fellow cavers, trained rescue personnel, both volunteers and Department of Natural Resources workers. All were personal friends I consider part of my beloved "cave family". They brought us food, water, warm clothes and smiles. One later commented that when he reached our little hovel, the smell was fantastically terrible from all of us clustered together for so long in our stinky cave gear. He said it was the best thing he had ever inhaled.

We made the long trek out of the cave, all of us under our own power, but greatly buoyed by the rescuers who escorted us along the safest route along the river, and assisted along the way. It took at least four hours of exhausted trekking, wading, scrambling and crawling for all of us to exit. What greeted us on the surface, in addition to relieved and jubilant family and friends: bright lights, medical personnel, fried chicken, a worried landowner and a very inviting campfire. It was surreal. I wanted to celebrate over beers with friends. I wanted to go home and sleep forever.

Time has passed, and I still maintain an active caving schedule with all of the familiar faces – we shared an experience and became stronger for it in many ways. I sincerely hope that the soccer team in Thailand is rescued soon. I can only begin to relate to their extended entrapment, but I also feel a certain kinship toward them. Like me and my caving friends, they were drawn to the beauty of the underground and simply wanted to explore.