A worker in Victoria’s hotel quarantine program has tested positive for coronavirus.

Victorian health authorities sent out a late-night alert saying that close contacts of the individual were being notified and that public health teams were investigating the case.

The Health Department did not provide any more information, but indicated further details would be released on Wednesday night.

The fresh case comes as Victorian health authorities investigate a transmission of the UK variant of COVID-19 within one of the state’s quarantine hotels after the virus jumped from a hotel room to a guest in the opposite room.

More to come on this breaking story.

Staff at WA’s quarantine hotels were not required to wear masks at all time and the infected security guard was sitting in a chair at the end of a hallway on the same floor as the guest he is suspected of catching the more infectious UK strain of the virus from.

“That is being attributed, most likely at this stage, the Victorian authorities are saying in the media, by someone opening the door in the hallway,” he said. 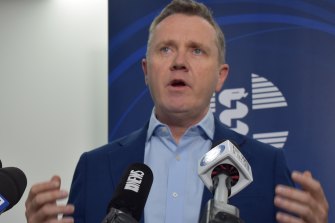 “I agree with the Premier – the Premier said he wouldn’t go into a quarantine hotel without a mask on. Why does the Premier know that and his deputy CHO didn’t know that?

“And if he had listened a while back when occupational health physicians, aerosol scientists, engineers, and many others had said this system you’re running is dangerous.

“If he had listened, then we could have avoided this lockdown in my view.”

Dr Miller said he didn’t think the irony was lost on anyone that all West Australians had to wear masks because the security personnel at quarantine hotels did not have to at all times.

He was also disappointed the government had dismissed air-conditioning in the quarantine hotels as a potential avenue of inquiry into how the virus could have leaked.

“What we’re saying is we don’t need negative pressure rooms in hotels. What we need is a lot of fresh air being blasted through so it’s not stagnant,” Dr Miller said.

Hello and thank you for joining us on our national COVID-19 blog for another day. David here wrapping up the blog as news on coronavirus trickles down into the evening.

In a late-breaking story, Victorian health authorities are investigating a potential transmission of the UK variant of COVID-19 within one of the state’s quarantine hotels.

Other things that made news throughout the day:

Thank you again for following along with our coverage. Night all.

WA Premier Mark McGowan has apologised to the state after its 10-month streak of no community transmission cases came crashing to an end on Sunday.

Mr McGowan made the comments on Wednesday after it was revealed the Four Points security guard dubbed ‘case 903’ was sitting about 3 metres away from the hotel room door of the person authorities believe he contracted the UK variant of the virus from on January 24 but had no direct interaction with them. 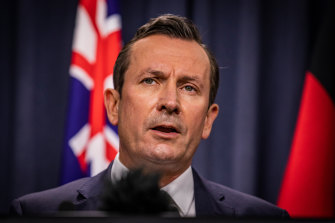 Mr McGowan also admitted he would have been wearing a mask if he was in the hotel but did not place blame on the guards who had just been following health advice given to them by authorities.

“Obviously the security guards have been following the rules that have been put in place by the infectious disease experts.”

Mr McGowan defended the health advice given to the state, which he said had held the state in good stead for the past 10 months.

“Over the last year we have had the best outcomes of anywhere in the world, obviously this has been a significant setback,” he said.

Outside of the existing lockdown mask requirements quarantine security guards will now also be required to wear masks at all times while working.

If WA continues to record no new cases over the next two days it is likely the lockdown will end by Friday but Mr McGowan said some restrictions including gathering limits would likely remain.

He said it was expected the government would announce the new restrictions by Friday morning.

Back to Melbourne, where the state’s Police Minister, Lisa Neville, is addressing the media on the potential spread of the UK COVID-19 strain in a Melbourne quarantine hotel.

Ms Neville said the group most at risk of catching the new UK variant stemming from the transmission inside the hotel quarantine program are other residents, rather than staff working in the hotel or members of the public. 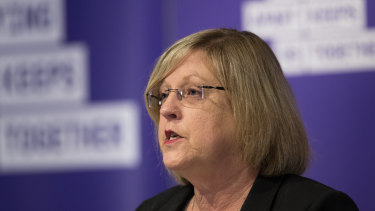 “I think the biggest risk is more likely to be other residents on the floor,” she said.

Ms Neville said given there was no evidence that people had breached protocols, the risk to the public was minimal.

The Police Minister said an investigation was underway as to how the potential transmission might have occurred, and authorities would review ventilation systems in hotel rooms.

“We all know our ventilation systems have been tested by the time we set up our program,” Ms Neville said.

“We made it very clear that the sprinkler system worked as it should, that [it] wasn’t sharing air between rooms, it wasn’t sharing room air into common areas.”

Ms Neville said that people were only opening their doors in hotel quarantine to receive food they had ordered from Uber Eats or from the hotel kitchen.

Meanwhile in Canberra, Prime Minister Scott Morrison has made a statement to Parliament rejecting the views of Liberal backbencher Craig Kelly on medical treatment for COVID-19 after holding out against calls to condemn his colleague.

Mr Morrison said his views “do not align” with those of the Liberal backbencher and he instead supported the official medical advice from Chief Medical Officer Paul Kelly. 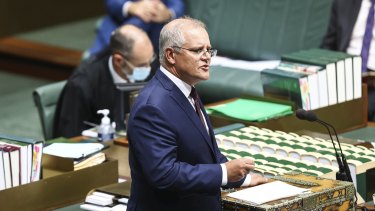 Unlike his statement to the National Press Club on Monday, the Prime Minister’s statement after Question Time on Wednesday did not praise Mr Kelly for doing a “great job” in the electorate of Hughes in southern Sydney.

“A key principle of our government’s successful response to the pandemic, and those of the state and territory governments, with whom I work, and the principle that I have applied to the chairing both of the federal cabinet, the national security committee of cabinet and the national cabinet, Mr Speaker, has been respect for the expert advice – the expert medical advice – that has guided our response,” Mr Morrison said.

“It is true that the views expressed by the Member for Hughes do not align with my views, or the views of the advice that has been provided to me by the Chief Medical Officer.

“Earlier today, the Member for Hughes and I discussed these matters and I made it very clear that that was the view of me as Prime Minister and of course the views of the government. Vaccination is critical. It is our primary responsibility this year, as we continue to respond to the pandemic.”

Mr Morrison welcomed a statement issued earlier by Mr Kelly, but he made no personal criticism of the backbencher.

The risk to the public of the recent case of the transmission UK COVID-19 variant in Melbourne hotel quarantine is “extremely low,” says the state’s Deputy Chief Health Officer Professor Melanie Van Twest.

“At the moment we don’t believe there is any risk to the public, or at least that that risk is extremely low,” Professor Twest said.

“The infection is between two rooms of people who are already in quarantine. And who remain in isolation now at The Alfred health hotel.

“There is no indication at this point that other people on that floor are involved, or that staff members are involved, but we’ll know more about that tomorrow when we get the results of the testing that’s being done today.”

Professor Twest said she “was not willing to put a name to” the kind of transmission that occurred but that it was likely airborne.

“Clearly, we are looking at something that has hung around in the air,” she said.

Professor Twest said the “working hypothesis” was that a large group of people, all infectious at the same time, plus the more transmissible and infectious a UK variant led to the transmission.

“Those two things combined appear to have led to this situation,” she said.

Professor Twest said the transmissibility of the UK variant was “rewriting a lot of the rule books as to how we manage this virus”.

Victorian Police Minister Lisa Neville says authorities are concerned about the fresh discovery of identical strains in different rooms of Melbourne hotel quarantine, that indicates a transmission within the building.

“This is a hotel transmission, it is not a community transmission,” Ms Neville said. “So what we’re saying is a transmission that has occurred between two guest rooms, and these guest rooms are on the same floor and they’re across from each other.

“There is an exceptionally low risk of any community transmission, that’s associated with this.”

Ms Neville said the spread was not the product of breaches of protocols inside the hotel.

“There are cameras right near these rooms that indicate there have been no breaches of protocols, either by the families leaving rooms or crossing rooms, or by staff at any time,” Ms Neville said.

“Staff have also always worn PPE … [and] we have our resident support officers who are based on those floors to ensure no one leaves.”

Victorian health authorities are investigating a potential transmission of the UK variant of COVID-19 within one of the state’s quarantine hotels.

A woman tested positive for the UK strain of the virus, which is more infectious than the original version, after a family of five in the opposite hotel room tested positive days earlier. 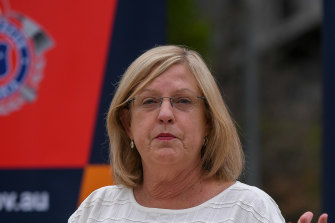 The woman in her 60s arrived from Malaysia on January 11 and tested negative on her first day in quarantine and 11th day. Her husband arrived in the same room on January 16 and the women agreed to restart her 14 days’ quarantine.

The news comes immediately before Police Minister Lisa Neville is due to provide an update at 4pm on Wednesday.

A family of five – including two adults in their 40s and children aged 1, 4 and 7 – begun their stay in a floor on the same level of the Park Royal Hotel on January 20 after arriving from Nigeria.

The family tested positive to the UK strain on January 24 and were moved to a hotel for those with the virus. Three days later, the woman in her 60s in the room opposite the family also contracted the same strain, as did her husband.

“CQV is investigating a potential transmission of coronavirus between hotel quarantine residents,” a government spokeswoman said.

“We are investigating how the two sets of cases are linked, including reviewing CCTV footage and undertaking environmental testing of the hotel – including a further review of ventilation systems.

“At this stage we don’t believe the residents have breached any infection prevention and control measures, or had contact with staff.”

Environmental testing and deep cleaning are underway and all positive cases were moved to a health hotel, where they remain in isolation. All staff are tested daily, and to date no staff have tested positive.

Staff will undergo further testing and quarantine at home until further notice as an additional precaution.

“All staff working in quarantine hotels are subject to strict infection prevention and control protocols, including wearing PPE and practising thorough hand-hygiene and social distancing.”

The press conference comes on the back of breaking news that Victorian health authorities are investigating a potential transmission of the UK variant of COVID-19 within one of the state’s quarantine hotels.