Under pressure from Jair Bolsonaro, mayors and governors are loosening restrictions even as confirmed infections spike. 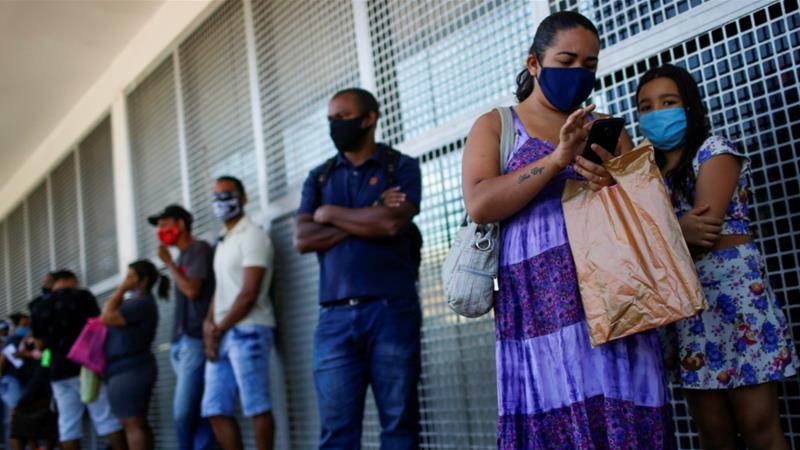 When an 80-year-old woman collapsed last week in the streets of the Brazilian capital’s poorest and most populous suburb, she was rushed to hospital and put on a ventilator, neighbours told local media.

But this was not just any suspected COVID-19 case.

Maria Aparecida Ferreira is the grandmother of Brazilian first lady Michelle Bolsonaro, who grew up in Ceilandia, a sprawling, dusty satellite city that has become a hot spot for coronavirus contagion around Brasilia.

The modernistic capital was the first big Brazilian city to adopt social distancing measures to curb the spread of the pandemic in March and was weathering the crisis well, until the lifting of quarantine rules triggered a surge in cases, health experts say.

Among the city’s spate of high-profile patients is President Jair Bolsonaro himself, who said on Tuesday he tested positive for the novel coronavirus after running a fever. In an online video on Thursday, Bolsonaro, who said he was working from home, again reiterated his position that economic crisis from the pandemic would be more dangerous than the virus itself.

Under pressure from Bolsonaro, mayors and governors across Brazil are loosening isolation orders even as confirmed infections spike, with 1.75 million cases in the country, with nearly 70,000 deaths – the world’s worst outbreak outside the United States.

Brasilia is a case study in the risks of reopening. The capital now has more infections per capita than any other major city in Brazil, with 2,133 confirmed cases per 100,000 people. That is more than two times higher than metropolitan Sao Paulo or Rio de Janeiro, according to health ministry statistics.

Some of that may come down to more testing in Brasilia, which has the country’s highest income per capita. But specialists say the recent explosion in cases has clearly been driven by a premature reopening.

Gyms and beauty parlours reopened on Tuesday. Bars and restaurants will resume business next week under a decree by Federal District Governor Ibaneis Rocha.

“This measure will condemn to death thousands of Brasilia inhabitants,” said public health expert Rubens Bias, a member of the city’s health council.

With rising deaths and its hospital system approaching collapse due to a lack of intensive care units, Brasilia should be in total lockdown, Bias said. He blamed the governor for ceding to Bolsonaro’s pressure to reopen for economic reasons. The president has said the economic effect of lockdowns is worse than the health risks of the disease itself.

On Wednesday, a judge suspended the decree reopening Brasilia and the city appealed the ruling. The governor then declared a lockdown for all but essential activities in Ceilandia and Sol Nascente, an adjacent shantytown hot spot.

But the city’s development agency said the Federal District has done more testing in proportion to its population than the United States, Switzerland or Austria.

It reported that coronavirus is still spreading in the city, though transmission has slowed to 1.2 people getting COVID-19 for every confirmed case, down from 2.1 in early April.

Brazil’s third-largest city, with three million inhabitants, Brasilia reported its first case of COVID-19 on March 5 – a 52-year-old woman who had returned from Britain and Switzerland.

In the two months after its first death, on March 24, Brasilia’s death toll climbed slowly to 100. But in the month after shopping malls reopened, on May 27, confirmed cases and deaths accelerated five-fold.

On Monday, the death toll passed 726 and the city reported a record of 2,529 additional cases in 24 hours.

The nurse, who asked not to be named for fear of reprisal by local government officials, said the hospital was short of doctors, nurses and ambulances to bring critical patients to the few beds available in intensive care units.

The pandemic has moved from affluent Brasilia to the teeming outer suburbs where workers often spend an hour on crowded public transport to get to their jobs in the centre, said the health council’s Bias.

“It is really tragic here. The number of cases has grown a lot in the last few days,” said Cilede Nogueira, a Sol Nascente resident.

Nogueira, who works as a housekeeper in central Brasilia, said bars in her neighbourhood were packed with people not wearing masks, and neighbours were heedlessly partying on weekends.

She said lines at banks were jammed with people collecting emergency payments from the government to supplement their incomes in the pandemic.

“There are electoral and economic interests that are more concerned with making money than saving lives,” said Bias