RISHI Sunak this morning sparked fears Britain's roadmap to freedom could be delayed after he extended the furlough scheme until September.

The Chancellor said the wage-subsidy scheme is being kept in place for another six months because "things might change" in terms of easing lockdown. 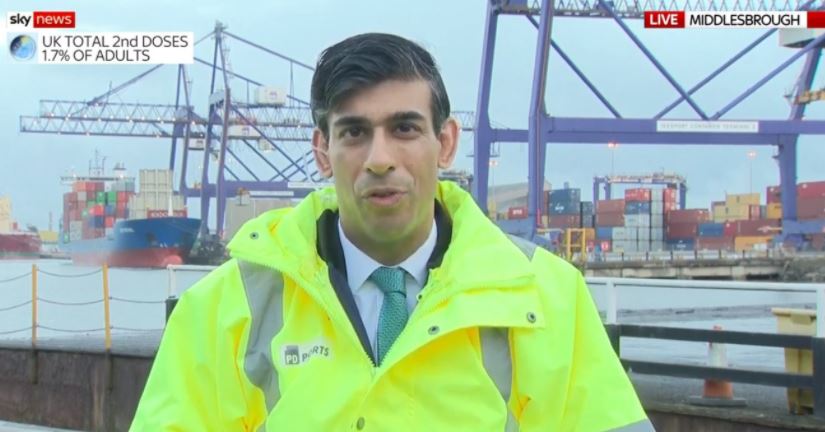 Speaking during a visit to Teeside port, he was asked why the multi-billion scheme isn't being wound up earlier.

He said: "The approach we took with all of our support yesterday was first and foremost to make good on the promise we made a year ago.

"Which was to do whatever it takes to support people, families, businesses through the crisis, and the Budget set that out.

"Furlough extension was a part of that, you're right, until the end of September. And we did that for a couple of reasons.

"I wanted people to have the reassurance that we were 'going long', beyond the end of the road map, because of course things might change.

"We wanted to accommodate even the most cautious view of exiting from the restrictions.

"Hopefully that won't happen, we are making great progress, and thanks to everyone involved in the vaccination drive for making that possible.

"But it is also important to remember that, just because the restrictions end, businesses will still need to take time to recover.

"Things will take a bit of time to get back to the way they were, so I think it is important to provide that extra cushion."

The Chancellor has also extended other support measures, including the £20 uplift to Universal Credit, until September.

That's despite the fact that according to Boris Johnson's lockdown plan, all Covid restrictions should be lifted by June 21.

The PM has insisted every stage of the four-phase roadmap will only be activated if the pandemic numbers allow.

He has left four weeks between each new stage of unlocking to allow scientists to measure the effect opening things up has on the spread of the virus, as well as hospitalisations and deaths.

The Chancellor's budget announcement yesterday sparked fears the unwinding of lockdown could yet be delayed.

It means millions will have been paid to stay at home for 17 months by the end of the furlough scheme.

The government will continue to pay furloughed workers' wages up to a maximum of £2,500 a month until the end of June.

Employers will then be required to meet 10 per cent of those wages in July and 20 per cent in August and September as the scheme winds down.

Mr Sunak told the Commons yesterday: "The furlough scheme will be extended until the end of September, there will be no changes to the terms.

"As businesses reopen, we'll ask them to contribute alongside the taxpayer to the cost of paying their employees.

"Nothing will change until July, when we will ask for a small contribution of just 10% and 20% in August and September."

This morning the Chancellor also defended extending the Universal Credit uplift, which will end in six months' time.

He said: "It is in full all the way through to the end of September because I think that is a more generous approach."

But he said beyond the Autumn his focus will switch to "throwing absolutely everything we have at protecting, supporting and creating as many jobs as possible".

He said: "It is right that that is our focus because that is the best way to help people over time to create a better life for themselves."