Coronavirus wipes £112 billion off London markets as FTSE 100 open 6% down after 291-point plunge to 5,585 in response to the bug being declared a pandemic and Trump’s EU visitors ban

The FTSE 100 fell by £112billion today as investors were rattled by travel restrictions imposed by Donald Trump in an attempt to halt the coronavirus pandemic.

The index of Britain’s leading companies fell 365 points or 6.22 per cent to 5,511 shortly after opening today – its lowest level since February 2016.

It comes after the US President suspended travel from Europe to the US for 30 days, responding to mounting pressure to take action against the outbreak.

The falls are also despite the Bank of England cutting interest rates from 0.75 per cent to 0.25 per cent and Chancellor Rishi Sunak unveiling a £30billion Budget plan.

Although the UK was spared from the travel restrictions, fears were widespread over its impact on the travel sector.

TODAY AND YESTERDAY: The FTSE plunged on opening today after falling again yesterday

Shares of British Airways, EasyJet and WIZZ Air, which have already had to axe flights to and from Italy, fell between 7 per cent and 9 per cent.

Oil majors BP Plc and Royal Dutch Shell Plc slipped between 4 per cent and 5 per cent, as oil prices took another blow from the dramatic moves by Mr Trump.

THIS WEEK: The FTSE has dropped throughout the week after a big fall on Monday morning

‘The travel ban is a major over-reaction from President Trump and economies and markets globally will pay the price.

‘Unsurprisingly, the FTSE 100 fell sharply on Thursday’s open and further falls are inevitable if any significant steps are announced following the emergency Cobra meeting.

‘Coupled with the World Health Organisation’s declaration that the Covid-19 outbreak is a pandemic, the European travel ban has created a perfect storm for markets.

‘The global economic fallout from current events could continue for months if not years.’

PAST THREE WEEKS: The FTSE 100 has been falling as the spread of coronavirus intensifies

With global growth expectations already taking a hit from the rapid spread of the virus, investors have fled risky equities to the perceived safety of gold and bonds.

Matthew Sherwood, head of global investment strategy at fund manager Perpetual in Sydney, said: ‘It appears we are getting to the next stage of the crisis, moving from self-isolation and regional isolation to almost national isolation.

‘That’s obviously terrible for the transport sector and there is much broader ramification because it seems the only way to halt the advance of the virus is by virtually shutting down major parts of the economy to the detriment of growth.’

All eyes are now on the European Central Bank policy meeting later today, with expectations running high of the central bank joining its British, US and Australian peers in cutting interest rates further. 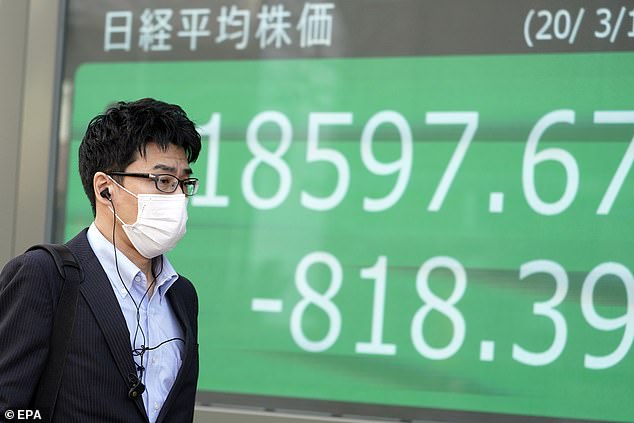 The FTSE 100 fell to a new four-year low yesterday despite the Bank of England cutting interest rates from 0.75 per cent to 0.25 per cent and Chancellor Rishi Sunak unveiling a £30billion. plan to stimulate the economy.

Mr Sunak, who was delivering his first Budget, said the economy faced a ‘significant impact’ from the spread of the virus, even if it was likely to be temporary.

And the Office for Budget Responsibility warned: ‘A recession this year is quite possible if the spread of coronavirus causes widespread economic disruption.’ 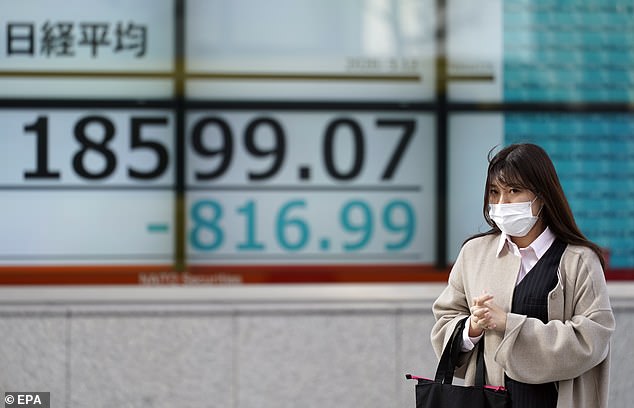 Monday’s sell-off was triggered by Saudi Arabia and Russia firing the opening salvos in an oil price war – which sent oil prices plunging by more than a third.

Oil prices dropped by 3.9 per cent to around $36 a barrel yesterday after Saudi Arabia’s state oil company Aramco said it had been ordered to raise its production capacity by an extra one million barrels per day.

This risks flooding the market with oil at a time – and pummelling prices further – at a time when demand is falling because of coronavirus-related transport lockdowns.

Traders also fretted about the US government response to the outbreak.

There have now been more than 120,000 confirmed cases worldwide and more than 4,300 deaths.