‘If you walk through Camden Market you’ll see human faeces in phone boxes’: Londoners mock Taylor Swift’s rose-tinted view of the capital as she sings about strolling through the city and watching rugby with boyfriend Joe Alwyn in new track London Boy

Taylor Swift is well known for writing her own personal experiences into her music, but her latest song about London has left listeners with all kinds of questions.

The international superstar released her seventh studio album Lover today to end a long wait for her dedicated fans since 2017’s ‘reputation’.

But many Brits were perplexed by the track ‘London Boy’ – written about her actor boyfriend Joe Alwyn – due to the ‘rose-tinted’ references to her experiences in the city dotted throughout the lyrics.

Some suggested she might not be telling the truth about going for ‘nights in Brixton’, enjoying ‘high tea’ or ‘watching the rugby in a pub with his school friends’.

And one jokingly suggested that if she actually walked through Camden Market, as Swift sings about enjoying, she would ‘see human faeces in phone boxes’.

Others mocked her for namedropping different parts of the city, adding a real Londoner would simply complain about the difficulty travelling around the city.

Swift is a frequent visitor to London but has rarely been pictured in areas she mentioned outside of the West End and Highgate. 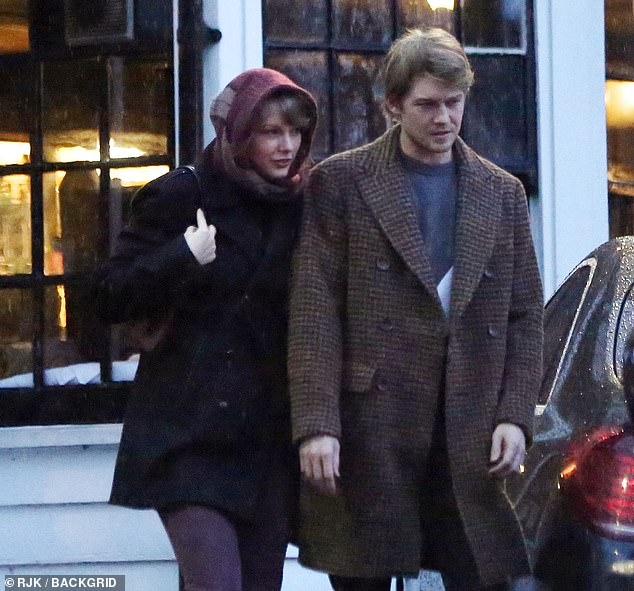 Taylor Swift has been ruthlessly mocked on social media over new song London Boy about her partner Joe Alwyn, pictured with Swift, after making rose-tinted references to different parts of London. Swift mentioned enjoying meeting Alwyn’s ‘best mates in Highgate’, an area she has been spotted with Alwyn in before, pictured here together outside a pub in February 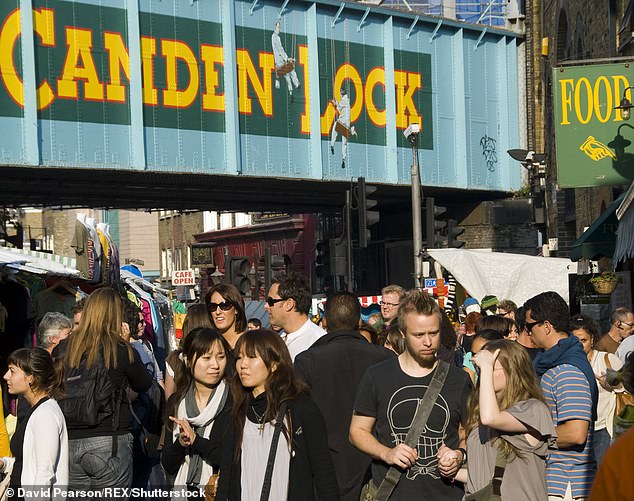 In the song  Swift mentions she loves walking through Camden Market in the afternoon, apparently without any appreciation for how busy the area, pictured, gets 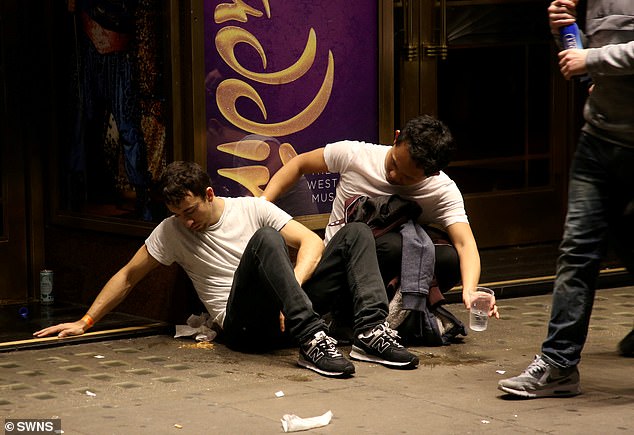 Her love for the West End was also called into question by music fans who pointed out the area, pictured, is often full of people looking the worse for wear 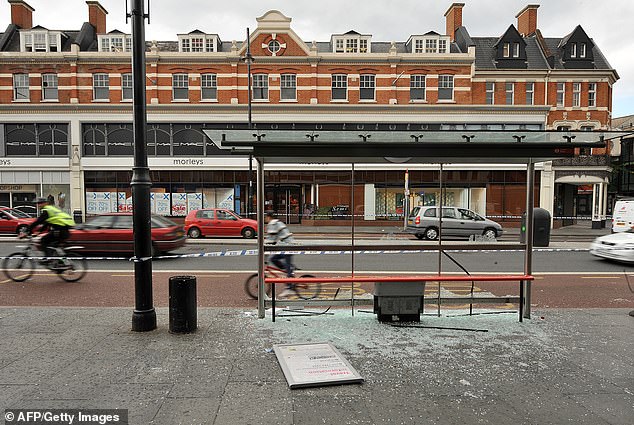 Brits also called into question her love of ‘nights in Brixton’, pictured, with many adamant they didn’t believe she had ever been to the area 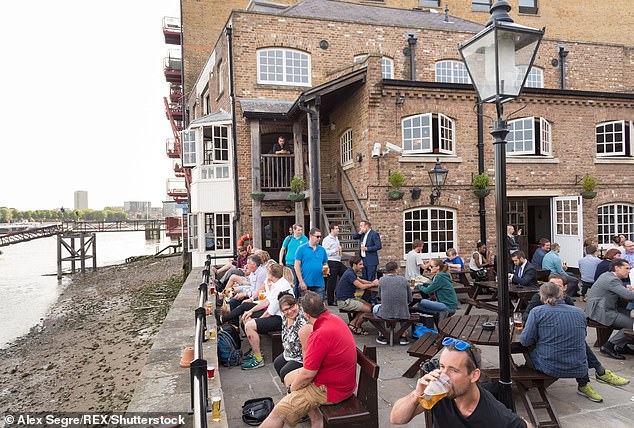 Swift mentions you can ‘find her in a pub’ in the song, appearing to forget how difficult it can be to locate one’s friends in a busy London watering hole 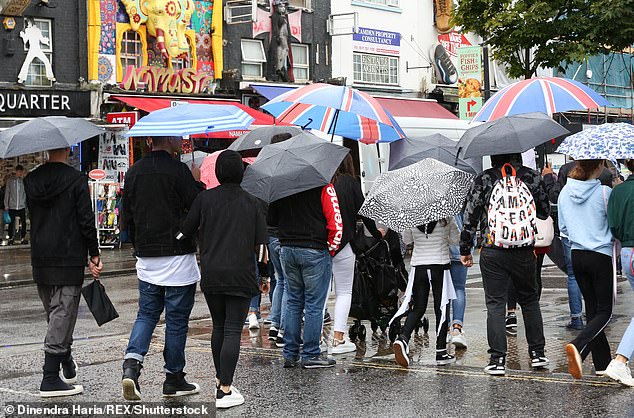 But some of her lyrics are beyond questioning, such as her affection for London’s ‘grey skies’ and ‘rany cab rides’. Pictured are people huddled for cover from rain in Camden Market

In the song, which does not yet have a music video, Swift, 29, says she ‘enjoys walking Camden Market in the afternoon’.

This line alone was enough for some Brits, who scoffed at the very idea the pop star would tackle the famously crowded area.

One social media user said: ‘Taylor Swift really did just sing “I enjoy walking Camden Market in the afternoon”. No one likes doing that m8.’

Another said: ‘It’s harmless and tbh I’ve heard a lot worse BUT… No one, and I’m sure of this, not one person who has been there enjoys “walking Camden Market in the afternoon”.’

One person jokingly suggested that if she actually walked through Camden Market, as Swift sings about enjoying, she would ‘see human faeces in phone boxes’ 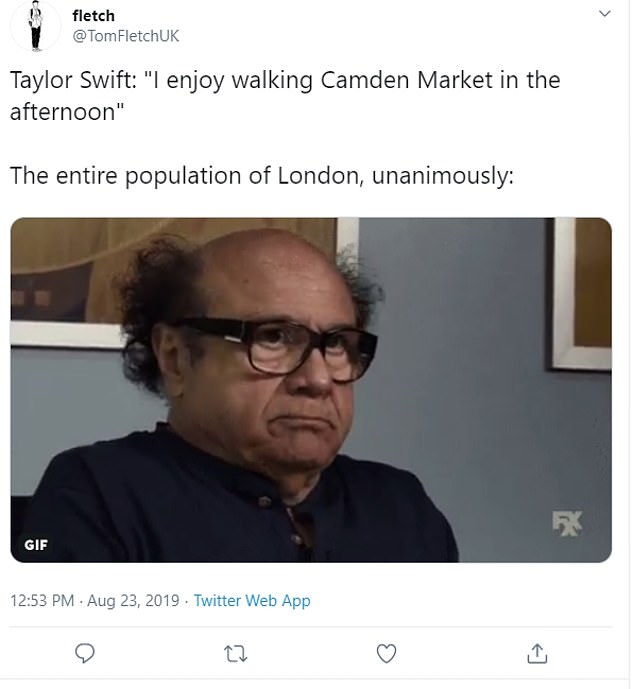 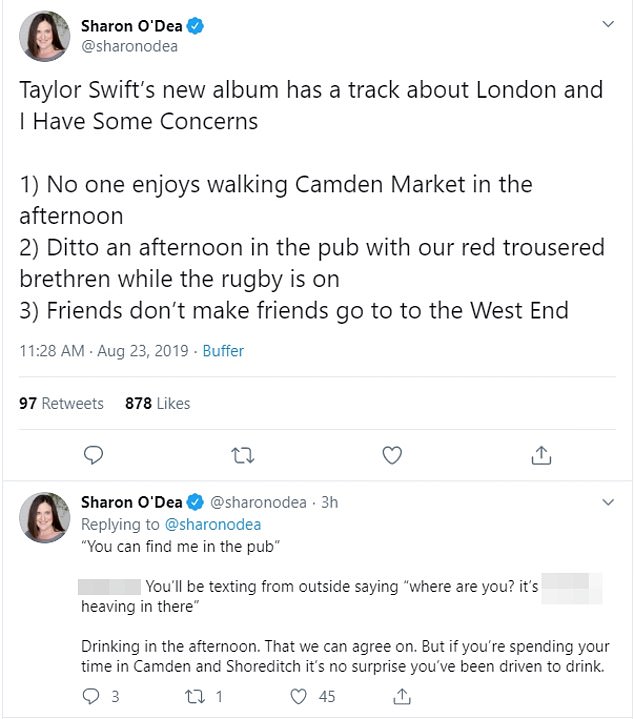 Sharon O’Dea had a list of problems with the track, pointing out friends don’t make other friends go to the West End and that she would have a hard time finding anyone in a London pub

Another reference to drive people mad was Swift’s insistence she enjoys whizzing around Brixton, Shoreditch and Highgate, while preferring Hackney to shopping at Louis Vuitton on Bond Street.

It was too much for one self-confessed Swift skeptic on Twitter, who said: ‘Who would spend an afternoon in Shoreditch, then a night in Brixton before heading back to Highgate.

‘Just thinking about that travel gives me shivers.’

Another added: ‘If Taylor Swift’s London song wanted to be truly authentic, she’d moan about having to get from Brixton to Shoreditch and then say “sorry, City Mapper says it’s going to take 79 minutes”.’

The Brixton lyric was the one Londoners seemed to find most objectionable, with many doubting she had ever stepped foot in the area let along spent a night at The Prince of Wales, Dogstar or Pop.

One woman wrote on Twitter: ‘Bit stressed about the fact that Taylor Swift has spent time in Brixton…and enjoyed it? Don’t believe it, was it the White Horse, was it the 159 [bus] or was it a chicken shop?’ 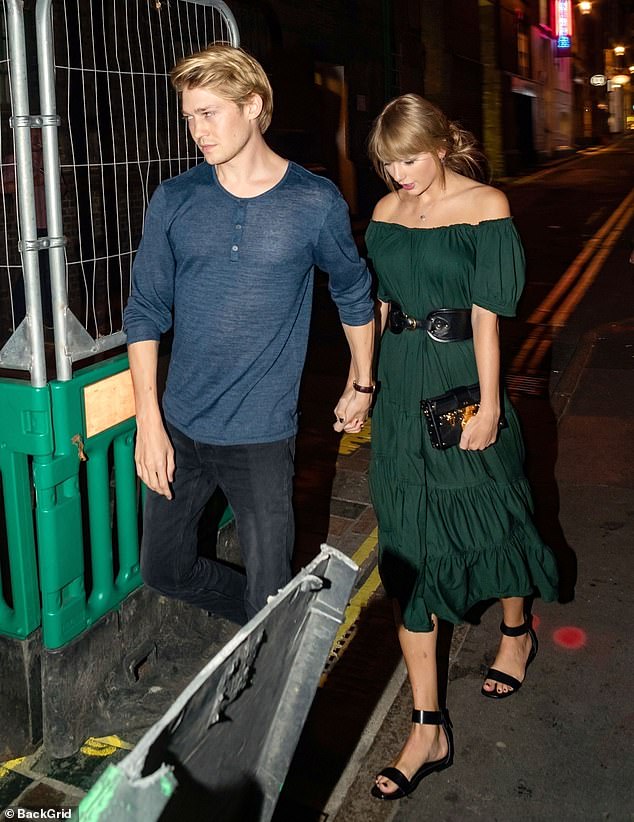 Swift is pictured with Alwyn last year walking down an alley in the West End, which she mentions she ‘loves’ in the new track

Twitter users were quick to question the truth of her claims, with one user claiming he could see her shopping in Shoreditch but not out in Brixton

Hackney did not escape the scrutiny of Londoners either, with one woman asking Swift if she was ‘sure’ she wanted to see the north London area 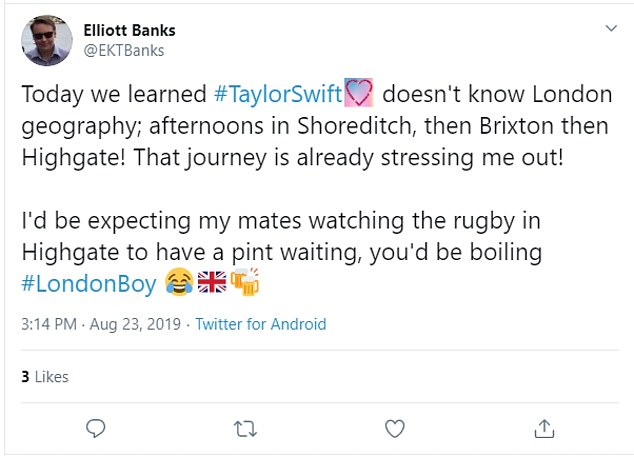 Another outraged user said: ‘I fully believe Taylor Swift would waste her Saturday afternoon f*****g about in some overpriced Shoreditch popups, but I do not believe she has been to Brixton in her life.’

And another woman said: ‘In Taylor Swift’s leaked album she has a song called London Boy where she claims she likes “nights out in Brixton”, somehow I don’t *quite* believe her.’

In typical British fashion, others bemoaned the lack of practical references in the song.

One user said: ‘Can’t believe Taylor Swift neglected to sing about the fact that contactless card and mobile device payment is now enabled on BOTH the London Underground and Overground.’ 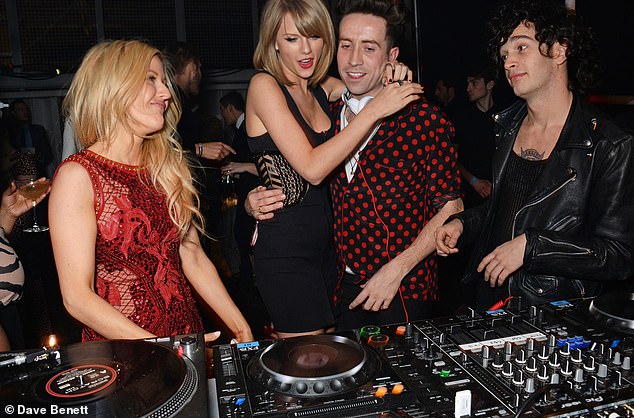 Swift is most often pictured out in exclusive parties in London with celebrity friends, such as this event in Soho with (from left) Ellie Goulding, Nick Grimshaw and Matt Healy of the 1975 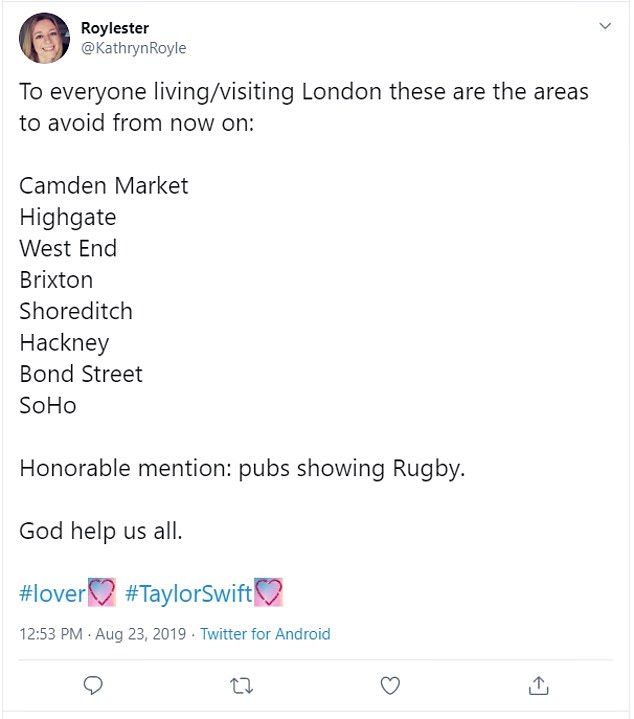 Others claimed Swift’s song was a naive approach to the city, with one woman labelling it ‘the official anthem of college sophomores who studied abroad for a month and snogged a guy in a pub once’.

And another Twitter user urged people to avoid going to any of the areas Swift mentioned again for fear of running into her.

She wrote: ‘To everyone living/visiting London, these are the areas to avoid from now on: Camden Market, Highgate, West End, Brixton, Shoreditch, Hackney, Bond Street, Soho. Honourable mention: pubs showing rugby. God help us all.’

Swift, who was born in Pennsylvania but moved to Nashville, Tennessee, aged 14 to become a country music star, did include some accurate-but cliched scenes in her vision of London, mentioning grey skies and ‘rainy cab rides’.

She adds that her relationship has also left her loving ‘high tea and stories from uni’ from her actor partner.

The track also starts with an interview clip between James Corden and Idris Elba where the latter talks about riding his scooter around London.

Swift and Alwyn have been together for more than two years but have kept their relationship out of the public eye for most of that time, rarely appearing together at official events.

She is known for writing songs about her lovers, with previous track Style reportedly about her fling with ex-One Direction singer Harry Styles and Look What You Made Me Do containing references to another British former beau Calvin Harris.

As different as Taylor’s experiences of London are, one woman suggested the biggest surprise was how Swift found boys in London 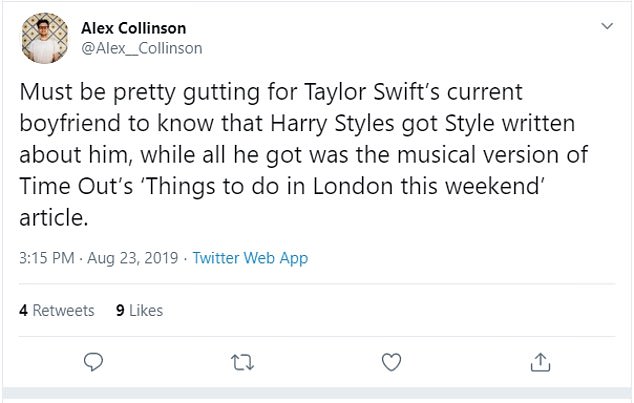 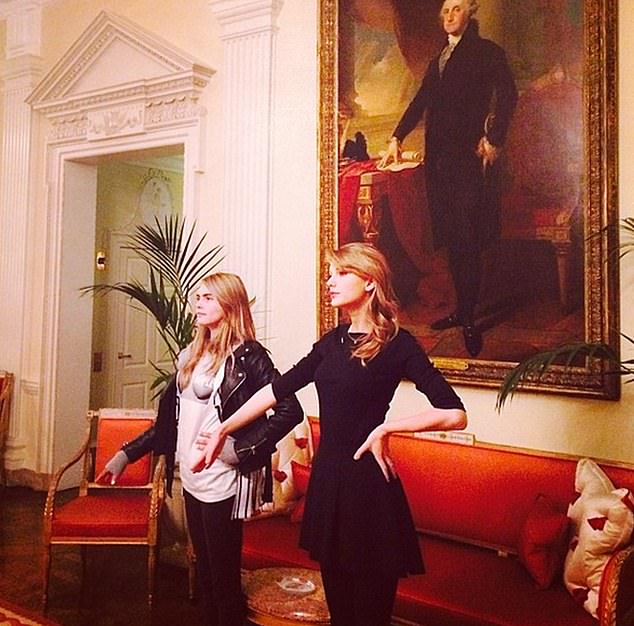 Swift is well known for spending time with her ‘squad’ of friend around London, including model and actress Cara Delevingne, pictured with her here at the US Ambassador’s residence in Regent’s Park five years ago 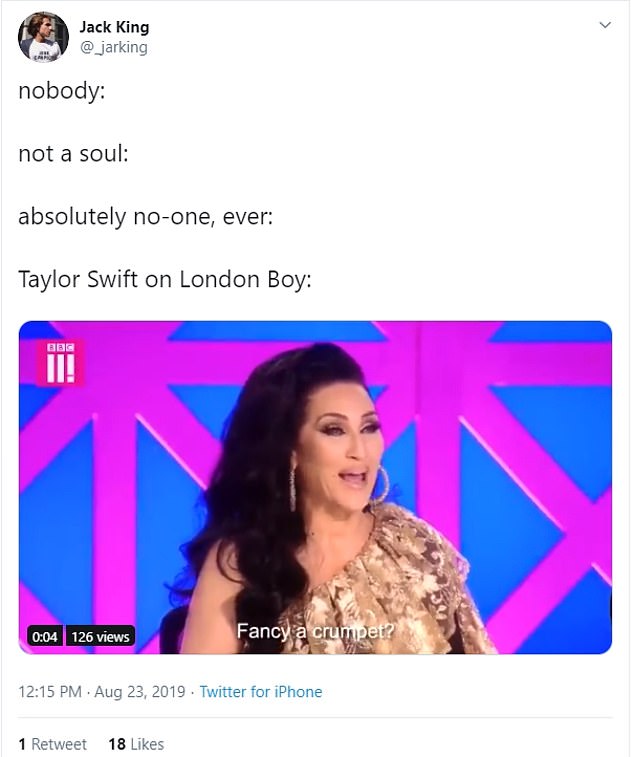 Memes quickly followed the release of her seventh album Lover, and thus London Boy, with more people taking aim at Taylor for appearing to want to be British

Fans also urged the singer, 29, not to perform the song anywhere near the English capital