The future of theatres: London’s West End stages its first musical in seven months as guests are temperature checked and actors not allowed to sing facing each other

Hundreds of theatregoers wore face masks and performers stood apart from each other as musicals returned to London’s West End for the first time since the coronavirus lockdown was imposed seven months ago.

Excited attendees gathered at the London Palladium for two performances of Songs for a New World on Sunday, which saw the orchestra sit socially distanced on stage and the singers avoid facing each other.

Staff at the theatre, owned by Andrew Lloyd Webber’s LW Theatres, carried out temperature checks, urged attendees to follow a one-way route around the building and offered an at-seat delivery service of refreshments.

The production, which starred Olivier nominees Rachel John from Hamilton and Rachel Tucker from Come From Away, was the first musical to be staged in London’s theatre district since all of the venues shut on March 16.

Attendees said on Twitter afterwards that it was a ‘beautiful’ production that left them in tears, with another saying it was ‘well organised’ and ‘proof going to the theatre is now safer than visiting the supermarket’.

Government-backed research has found singing is no riskier than talking when it comes to infecting other people with Covid-19, but shouting and belting were said to be 30 times more prone to spreading the virus.

Therefore performers in the UK are now allowed to stand as close as one metre apart from each other, but are encouraged to be further apart and are given additional amplification to avoid them having to belt out lyrics.

Theatres in areas in tiers one and two under new local lockdown measures can still operate with standard social distancing measures in place, while it will be up to local authorities whether those in tier three can operate. 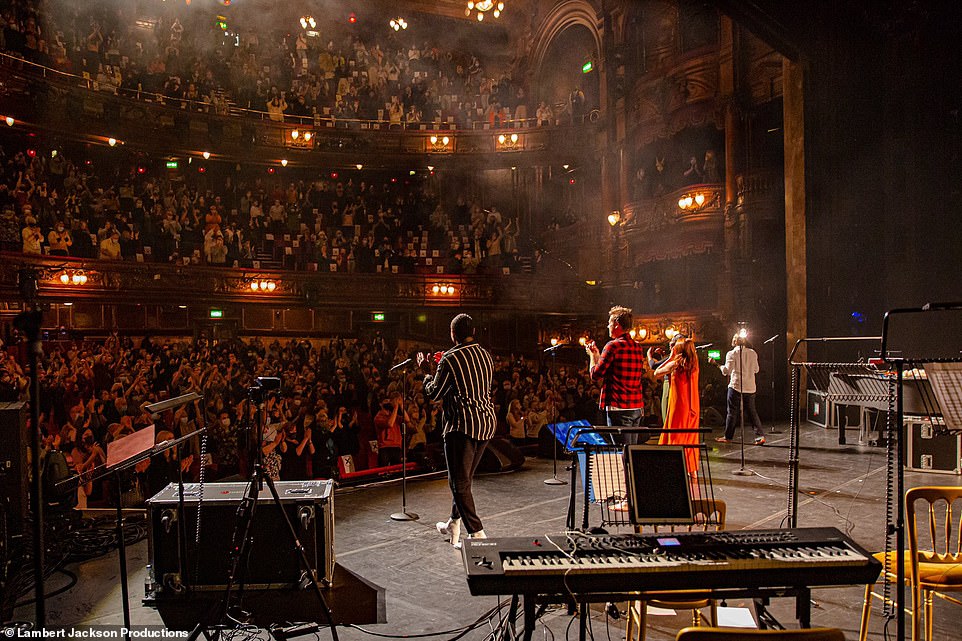 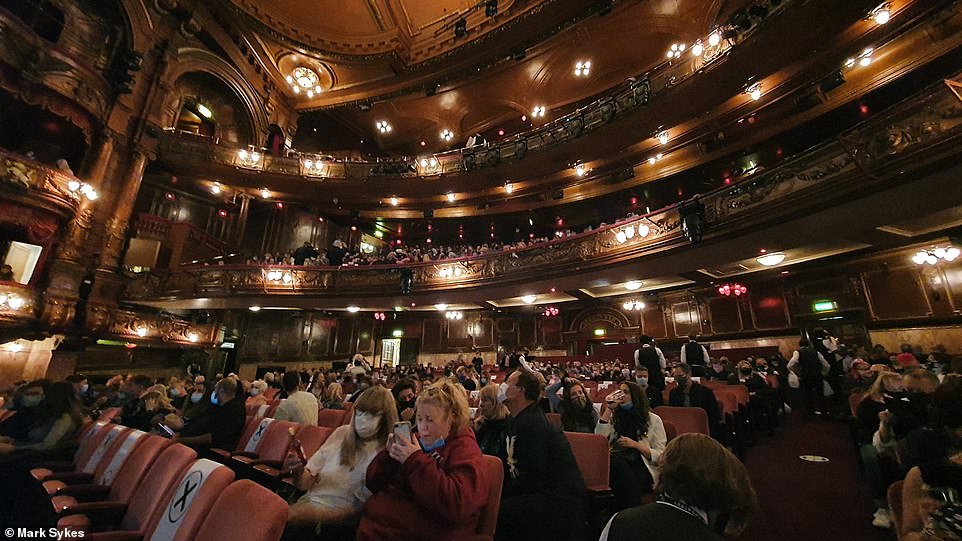 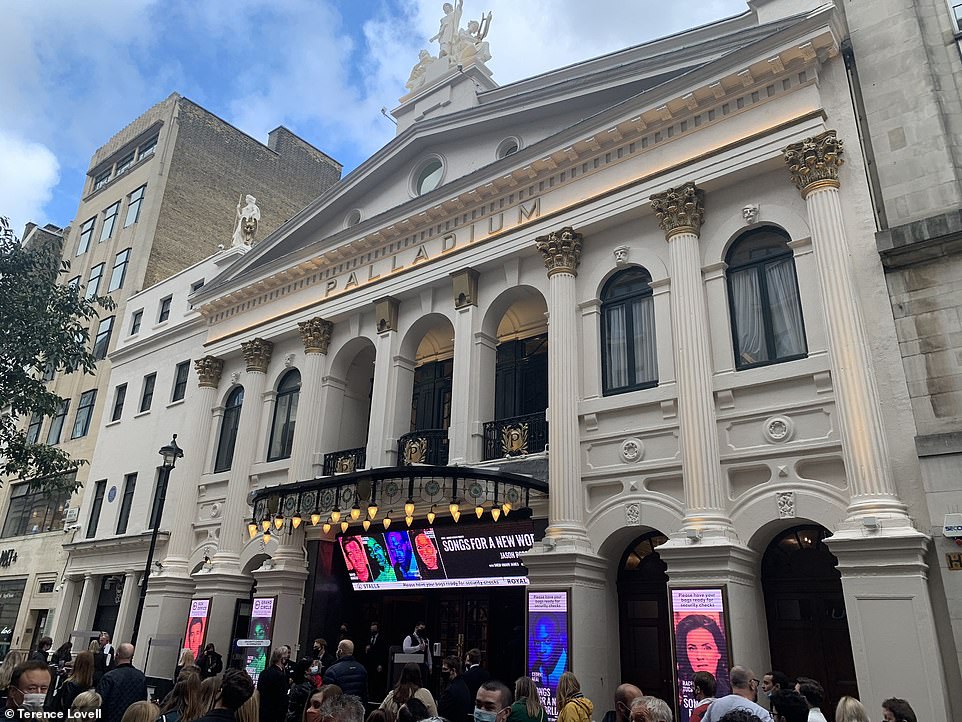 Jonathan Chamberlain, an employment lawyer, was in the crowd on Sunday and tweeted: ‘I’m in a real live theatre, in the interval of a real live show. Never mind the big closing number, I was welling up at the opening notes.

‘Golly I’ve missed live theatre. I’m not the only one. The audience might have been more animated if Elvis himself appeared, but short of an early Las Vegas period resurrection we couldn’t have been more excited.

What are the new rules for visiting the theatre?

‘Cheering, whooping right from curtain-up. And drinks delivered to your seat £2.60 for a bottle of water. Fifteen quid a programme. Oh West End rip-off, how I’ve missed you!’

Madeleine Gibb, a grandmother from Godalming in Surrey, tweeted: ‘Congratulations and thanks to all at the London Palladium for a very welcoming, safe, well organised and most importantly inspiring return to live theatre. Proof going to the theatre is now safer than visiting the supermarket and I know where I’d rather be.’

Actor Robert West, from London, added: ‘Finally back in a theatre thanks to Lambert Jackson Productions to watch Songs for a New World at the London Palladium. Beautiful. Stunning. Brilliant. I cried. Thank you.’

The show starred a number of actors from a digital production that streamed earlier this summer, with David Hunter from Waitress and Shem Omari James from The Wild Party joining the cast.

John Rogerson, a London-based talent agent, added: ‘I think it’s safe to say that the audience here at the London Palladium are happy to be here.’

And Jazz Coll, also from London, added: ‘So tremendously overwhelmed and happy to be back watching live London theatre.’

The show was directed by Séimí Campbell and presented by Lambert Jackson Productions, with Adam Hoskins as musical director.

In a review for the Guardian, Mark Lawson gave it four stars and wrote: ‘Andrew Lloyd Webber, the Palladium’s owner, has fought titanically, in public and Westminster private, to argue a model of Covid-safe theatre.

‘Combining clever selection of repertoire with precautions for performers and audiences (thermometers, spaced seating, masking), Songs for a New World shows that crisis entertainment can be bolder than just solo shows.’

Last weekend it was revealed Les Miserables will return to the stage for a special Christmas run, with theatre owner and producer Sir Cameron Mackintosh announcing the news during the Britain’s Got Talent final on ITV.

The show will run at the Sondheim Theatre in Shaftesbury Avenue for six weeks from December 5, with both Michael Ball and Matt Lucas starring.

The news came after the combined companies of Les Miserables – The Staged Concert, The Phantom Of The Opera and Mary Poppins took to the stage on Britain’s Got Talent for a musical medley.

The performance coincided with Les Miserables’ 35th birthday and The Phantom Of The Opera’s 34th birthday.

Appearing on stage after, Sir Cameron said: ‘I can’t tell you how emotional this is for me and for all of us.

‘I cannot believe that these performers, great friends of mine, have not performed before tonight for seven months. It is extraordinary.’

He said he hoped the performance had inspired Chancellor Rishi Sunak to push for the reopening of theatres.

In June, Sir Cameron announced that shows including Mary Poppins, Hamilton and The Phantom Of The Opera would not return to the West End this year. 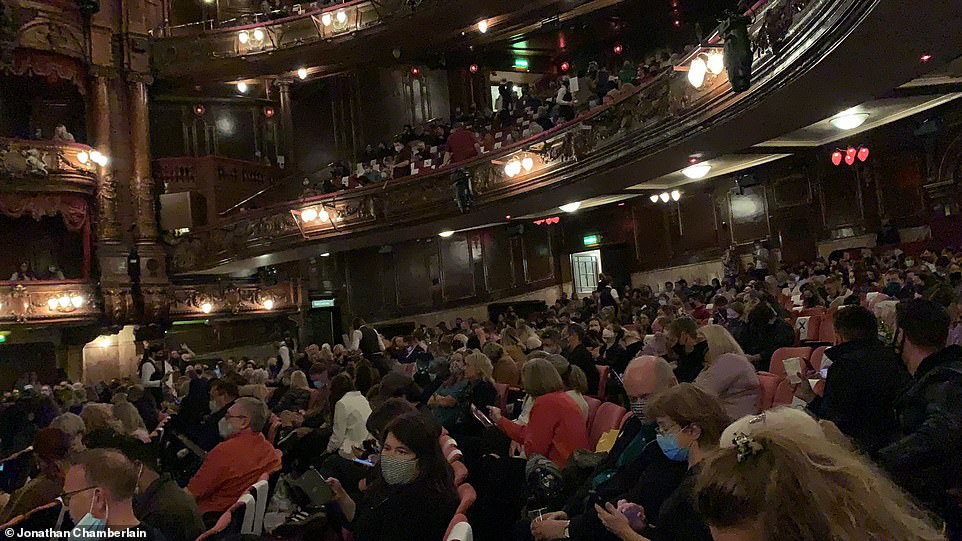 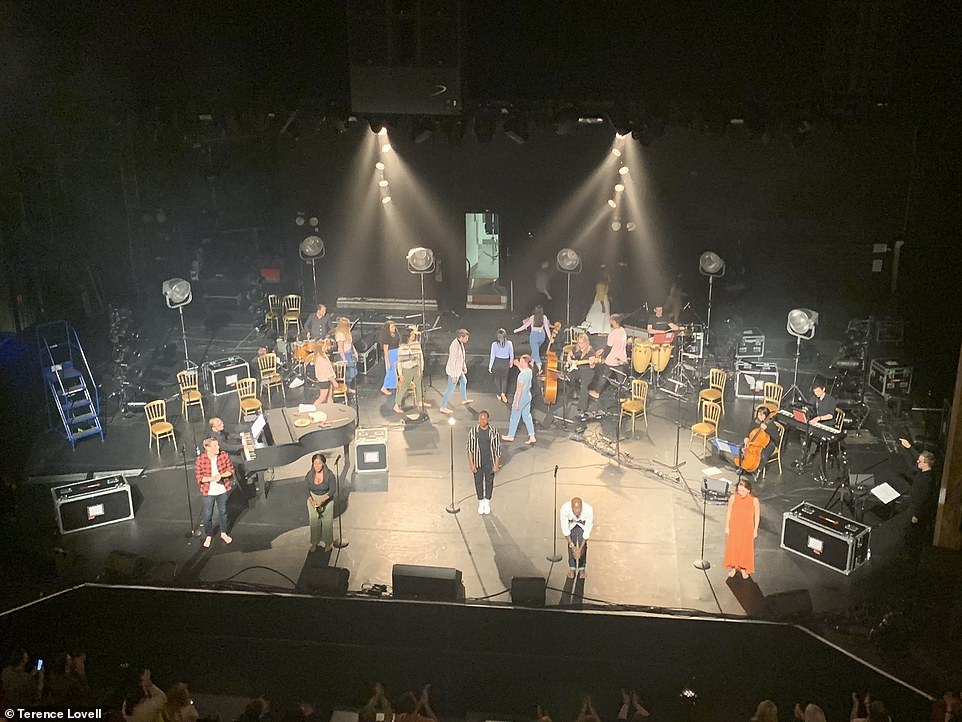 It comes after the announcement last week that pantomime is returning to the West End.

Pantoland at The Palladium will play across December in front of a socially-distanced audience and star Julian Clary, Ashley Banjo and Diversity, Nigel Havers and Beverley Knight.

It is made possible due to a National Lottery initiative to buy seats which must remain empty for social distancing.

In the US, although an exact date for various performances to resume has yet to be determined, Broadway producers are now offering refunds and exchanges for tickets purchased for shows through until May 2021.

Broadway theaters abruptly closed on March 12, knocking out all shows – including 16 that were still scheduled to open – and scrambling the Tony Award schedule, with nominations this year set for this Thursday.

Producers, citing health and city authorities, previously extended the shutdown to June 7, then again to September 6 and again to January 3 next year. It has now been moved to May 30. 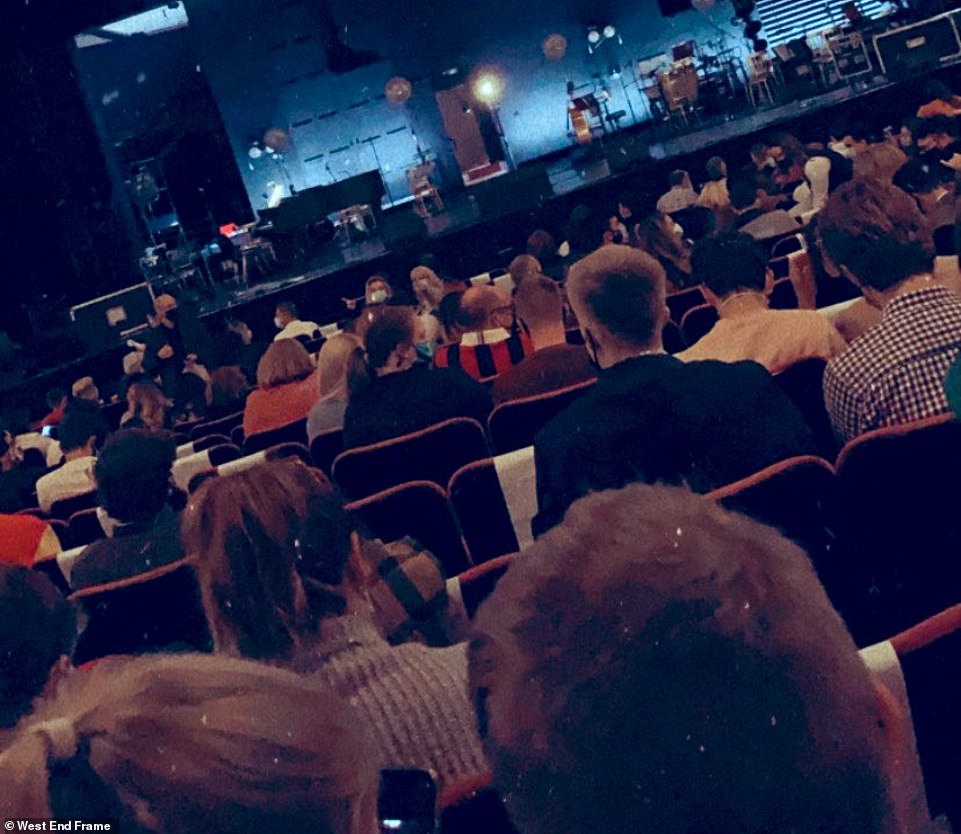 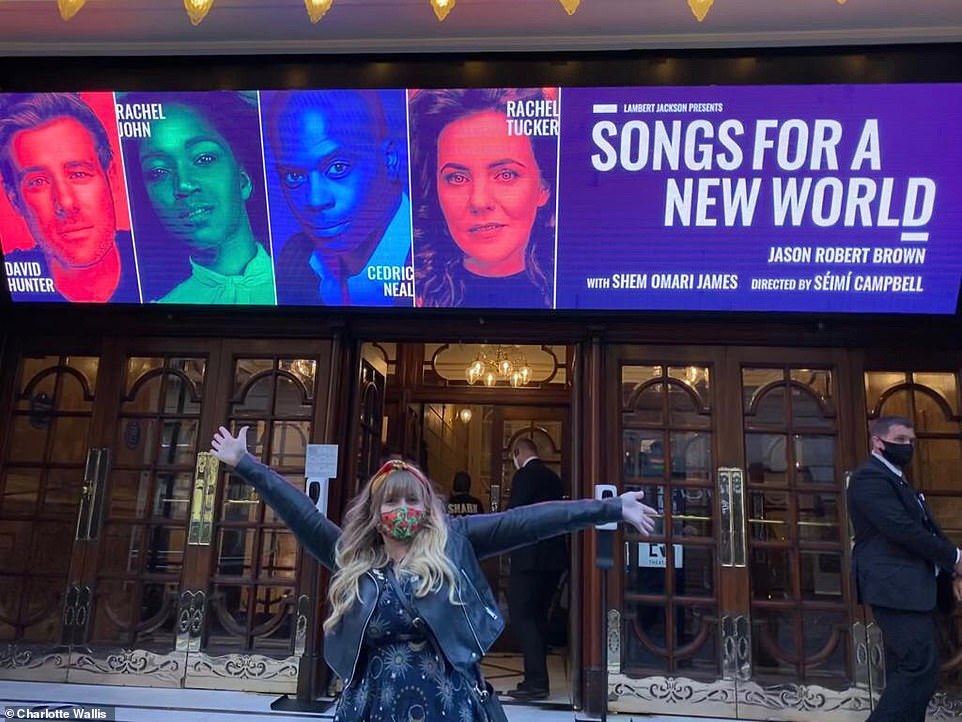 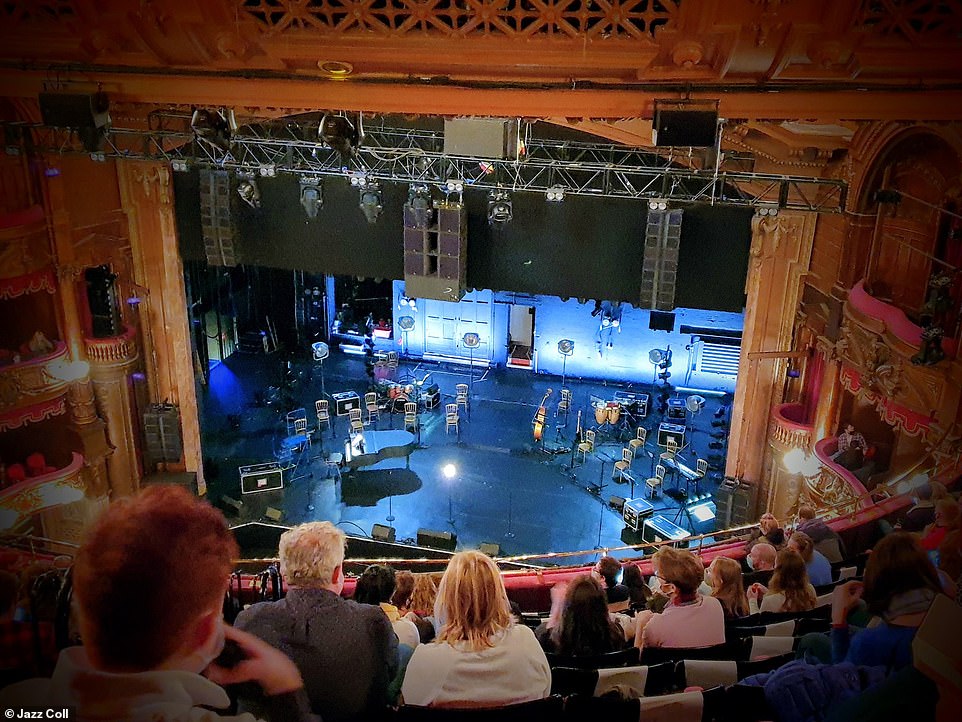 The new timeframe may complicate a clutch of shows that had planned to open in the spring, including The Music Man, Flying Over Sunset, Caroline, or Change, Plaza Suite, American Buffalo and The Minutes.

Within hours of the announcement, the musical based on Michael Jackson, called ‘MJ,’ pushed back performances to September.

The move comes less than a month after the Metropolitan Opera said it will skip an entire season for the first time in its nearly 140-year history and intends to return from the pandemic layoff next September.

The John F. Kennedy Center for the Performing Arts in Washington DC has cancelled most previously announced performances and events through the end of 2020, as has the Huntington Theatre Company in Boston.