So you gained a few chef’s hats during Victoria’s coronavirus lockdowns?

But does your knowledge extend to the mushroom varieties Amanita phalloides and Agaricus xanthodermus?

It needs to – and not so you can try them in your next funghi sourdough. 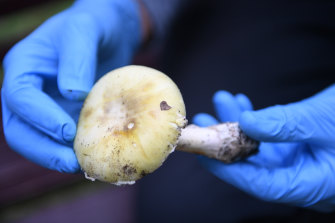 Death Cap mushrooms, with their greenish yellow cap, cause 90 per cent of all mushroom poisoning deaths.Credit:Penny Stephens

They’re Victoria’s two most prominent poisonous mushroom varieties and health bosses are warning adults, children and their pets to avoid at all costs this autumn.

Consider their English titles – death cap fungus and the yellow staining mushroom – and that quickly becomes an understandable warning. 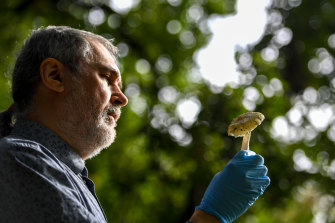 ”While these mushrooms might look like edible mushrooms that you can buy in the shops, unfortunately many of them are poisonous,” Dr Bone said.

Tom May, the Royal Botanic Gardens’ principal research scientist in mycology, did a lap around some of Melbourne’s most-frequented sites on Wednesday: down by the Yarra River, up through The Domain and into the Botanic Gardens.

He gathered a laundry bucket full of toxic mushrooms, including multiple death caps that can kill within 48 hours of consumption. 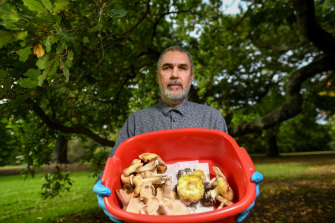 Dr May with a laundry bucket of toxic mushrooms he gathered in and around the Royal Botanic Gardens.Credit:Penny Stephens

The death cap accounts for 90 per cent of all mushroom-induced deaths, triggering violent stomach cramps, diarrhoea, vomiting and nausea.

Patients often think they have recovered but suffer liver failure 24 to 48 hours later that can lead to death.

Health authorities are also on the front foot because of a boom in mushroom poisonings last year. They received 426 calls for suspected poisonings, compared to 194 in 2019 and 200 in 2018. A handful of people ended up in intensive care.

How could the number of calls have doubled in a year Victorians were bound to their homes by coronavirus restrictions? 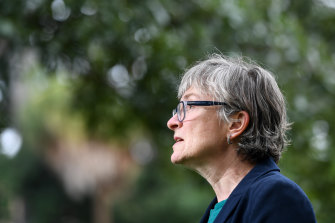 That was precisely the problem, Dr Bone said, and authorities were concerned post-lockdown curiosity could cause more incidents this year.

“We think last year may well have been partly because of the weather, which was encouraging mushroom growth, but also partly because people in that first lockdown were spending more time in parks and gardens than they would normally have done,” she said.

Dr May said while the death cap is distinguishable by its greenish yellow or light green cap, the yellow stain looks “extremely similar” to mushrooms available in supermarkets and causes similarly acute stomach eruptions.

“They’re very easy to confuse with cultivated mushrooms,” he said. 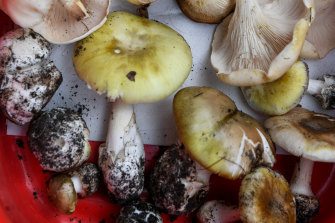 Samples of poisonous mushrooms including the Death Cap and other varieties more similar to edible funghi.Credit:Penny Stephens

Considering the likeness, authorities’ advice is simple: don’t go picking for any mushroom varieties in Victoria and certainly don’t ingest them. Cooking, peeling and drying won’t diminish their toxicity.

The death cap and yellow stain grow out the side of oak trees, normally about head height. Councils and gardeners do regular sweeps to decrease the danger but can’t guard against every wild food forager and curious child (or pet dog).

Dr Bone’s advice if you do eat a poisonous mushroom is to take a full sample with you to the hospital for doctors to identify the variety.

“This is definitely not the time of year to be stocking up your pantry with free mushrooms,” she said.