The young descendant of a World War One pilot who was hailed as the ‘best flying Englishman’ by the Red Baron is now following in his footsteps.

Air engineering technician James Wilde traces his lineage back to Captain Albert Ball, one of Britain’s most decorated pilots who was once its leading flying ace.

Captain Ball’s death at just 20 years old on the Western Front in 1917 sparked a national mourning after the young pilot achieved an incredible 44 victories in just one year of flying.

After his death, famous German fighter pilot Manfred von Richthofen – better known as the Red Baron – said he was ‘by far the best English flying man’.

Air Engineering Technician Wilde, 17, is now following in his footsteps in the Royal Navy – and he bears a striking resemblance to the daring airman. 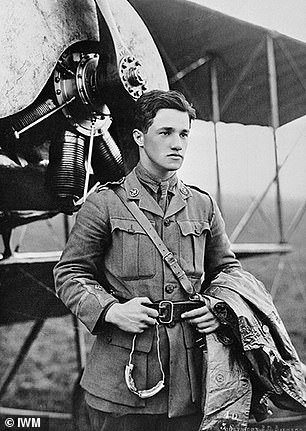 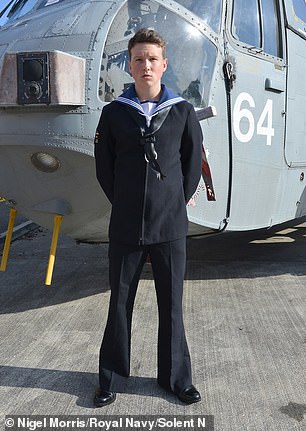 Captain Albert Ball (left) earned five awards for valour in just one year of flying and was so courageous he complained when bad weather stopped him fighting. Now his descendant, James Wilde (right), is undertaking specialist aviation training in Cornwall

The young man has just qualified at HMS Sultan in Gosport, Hants, where he was taught the basic principles of flight, flight safety and aircraft maintenance.

After passing out of Phase 2a training he will go onto further specialist aviation training at Royal Naval Air Station Culdrose in Helston, Cornwall.

The teenager will learn how to work on Merlin MK2 helicopters, known as Submarine Hunters, rather than the Nieuport 17 French fighter plane flown by Captain Ball.

Wilde, from Gosport, says his family ‘have always talked proudly’ about his illustrious war career and achievements. 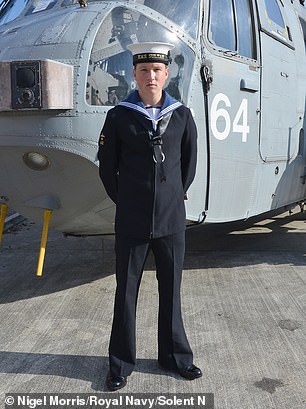 Captain Ball was only 19 when he got his wings and was flying for just one year before his death in May 1917.

Following a dogfight over France, Cpt Ball crashed down into a field and died.

He was posthumously recognised and awarded the prestigious Victoria Cross.

AET Wilde said: ‘After leaving school Albert Ball began his working life as an engineer and just like him I’m following that route now.

‘Now qualified out of HMS Sultan, I will go on to train on a different route to my great-great-grandfather.

‘He went on to become a fighter pilot and I will be learning to work on Merlin MK2 at RNAS Culdrose.’

During his studies, he came face-to-face with his ancestral past – especially while taking time out to look around HMS Sultan’s Air Museum.

He added: ‘Visiting the Air Museum at Sultan has taught me and my family a lot more about my ancestor and the thought of being in the same place and walking some of his footsteps is amazing.’ 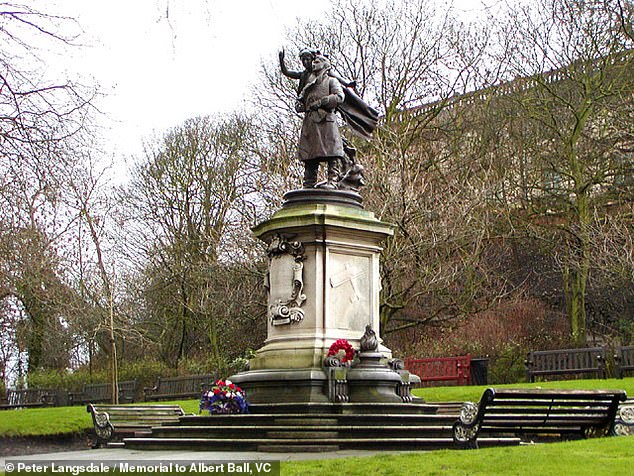 Captain Ball earned the Victoria Cross, Distinguished Service Order, Two Bars and the Military Cross. He had been a member of RFC Squadrons 13 and 56 – both of which were formed in Gosport.

He was the first ace to become a British national hero and during his last battle he was spotted pursuing the Red Baron’s brother Lothar von Richthofen.

Lone Wolf of the Sky: How Captain Ball became one of Britain’s most decorated pilots by the age of 20 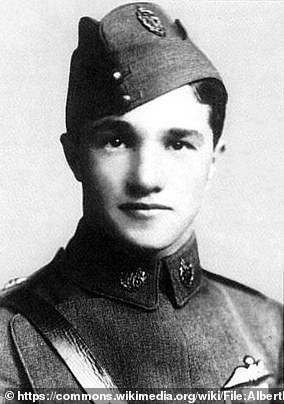 Albert Ball (pictured) was born on August 14 1896 in Nottingham. In September 1914, he enlisted in the Sherwood Foresters.

A courageous combatant, he once wrote to his father complaining about  ‘rotten luck’ when strong winds stopped him fighting. ‘No flying, so this is one day wasted,’ he wrote.

In May 1916 Ball’s secured his first victory against a German reconnaissance aircraft.

On his 20th birthday in August 1916 he was promoted to acting captain. The same month he was transferred to No 60 Squadron.

By the end of August he had 17 kills and was mobbed in the streets of Nottingham while on leave.

In 1916, Ball was awarded two gallantry awards simultaneously – the DSO and the Bar.  By May 1917 he had 44 confirmed kills and 25 unconfirmed.

After his final victory that month he wrote to his father: ‘I do get tired of always living to kill, and am really beginning to feel like a murderer. Shall be so pleased when I have finished.’

That was the last letter Captain Ball wrote to his father. He crashed down into a field and died in a dogfight over France in May 1917.

He was awarded the prestigious Victoria Cross posthumously. The airman was the recipient of another Bar and the Military Cross and earned his distinguished record in just one year of flying.

WHO WAS THE RED BARON AND WHO BROUGHT HIM DOWN? 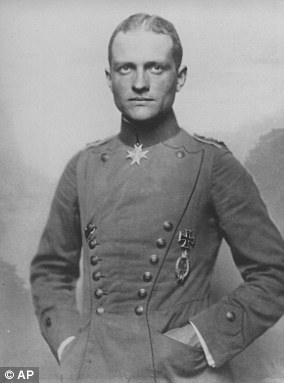 By Hannah Moore for MailOnline

Manfred von Richthofen (pictured) took down more Allied planes than any other German pilot in World War I, with 80 confirmed kills to his name.

Known as the Red Baron, Richthofen was shot down and killed near Vaux-sur-Somme in France on 21 April 1918.

Almost 100 years after his death, Richthofen remains one of the most widely known fighter pilots of all time.

At the time he was shot down Richthofen had been pursuing a Sopwith Camel at very low altitude, piloted by Canadian flyer Lieutenant Wilfrid ‘Wop’ May of the Royal Air Force.

The Baron was spotted and briefly attacked by another Camel piloted by May’s flight commander, Canadian Captain Arthur ‘Roy’ Brown.

It is believed a single .303 bullet hit Richthofen, damaging his heart and lungs so severely that it caused a quick death.

The RAF credited Brown with shooting down the Baron, but it is now generally agreed that the bullet which hit Richthofen was fired from the ground.

Some sources have suggested Australian gunner Sergeant Cedric Popkin shot the Baron with a Vickers gun. Others have named his countryman Robert Buie.

A third Australian gunner, W. J. ‘Snowy’ Evans, has also been credited with bringing the Baron down with a Lewis gun.