When a Louisiana high school student nearly couldn’t graduate because the shoes he was wearing violated the school’s graduate dress code, a teacher literally stepped in to make sure that the student would walk for graduation.

The student, Daverius Peters, arrived at the local convention center in Bouette on May 19 and was told by a school representative that he couldn’t enter the building.

Despite Peters wearing professional attire, the representative told him that his shoes – black leather sneakers with white soles – did not fit the criteria for the school’s dress code for male students: dark dress shoes. 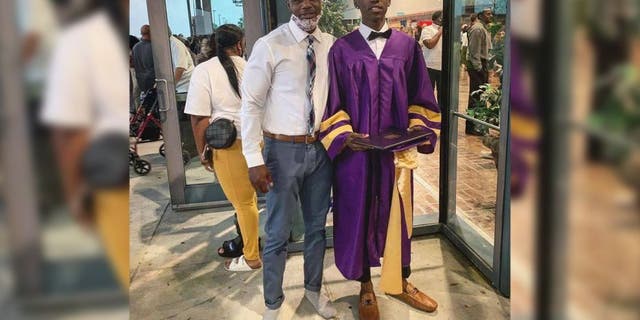 Despite Butler’s shoes being two sizes, too big for Peters, the gesture ensured that Peters graduated.
(John Butler)

That’s when John Butler, a paraeducator and student mentor at the school, stepped in to help.

“It became a no-brainer for me,” Butler told Stephanie Weaver with FOX Television Stations. “I immediately took my shoes off.”

Butler’s shoes were two sizes too big for Peters, but the student was reportedly relieved at the gesture.

“We’re gonna have to make this work, because no matter what, you are walking on that stage,” Butler told Peters. “He smiled, he looked good and I was just so happy about that.”

Thanks to Butler’s kind gesture, Peters was able to walk across the stage and received his diploma.

“When we have an opportunity to make improvements to current policies, procedures, guidelines, practices, etc., we act on it and as such, will be revising the graduation dress code. We appreciate this being brought to our attention so we can continue our work towards more inclusive and equitable practices,” Crovetto said.