A terrible axe-ident: Lumberjack’s moment of fun nearly goes disastrously wrong when a shard of wood flies back at him as he throws axes at a tree trunk

This is the moment two men narrowly avoid being hit by a shard of wood which flew back at them while one was throwing axes at a log.

The man was playing with the axes in a wooded area with a male friend who was standing behind him.

Footage shows the first axe getting stuck firmly in the piece of tree trunk he is aiming at. 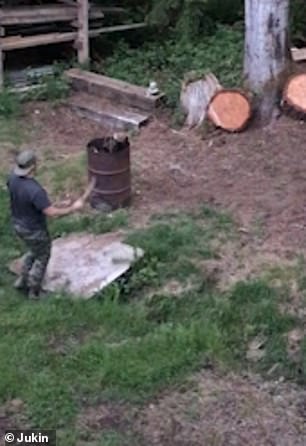 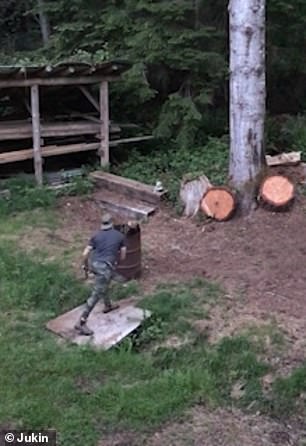 A man throws axes at a piece of tree trunk in a wooded area while his friend stands and watches. The first axe gets stuck in the wood successfully

But the second appears to hit the first head on, sending a piece of wood shooting back at him and his friend.

The shard grazes his right shoulder as it flies past him, and his friend raises his arms and turns away.

As the wood flies past him, the first man shouts, ‘woah!’, and a woman who appears to be the person filming shouts, ‘oh my God!’

The first man, who is still holding another axe, then looks up at the camera in shock, clearly amazed that he has only just avoided serious injury. 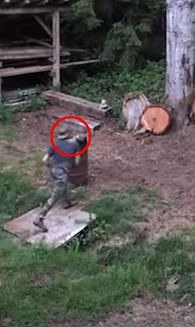 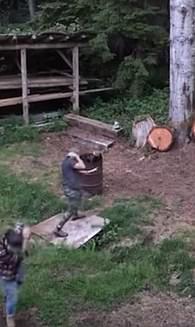 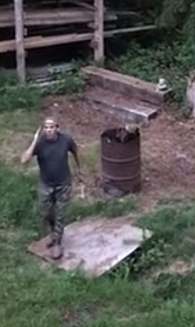 But when he throws a second axe, it hits the embedded one and a shard of wood flies back at him and his friend, grazing the man’s shoulder. The wood continues past him and almost hits his friend too. The first man shouts ‘woah’, while a woman filming exclaims, ‘oh my God’, before the man looks up at the camera in amazement