Yellow Vest protestors have taken to the streets of Paris to protests against the restoration of Notre Dame, claiming Mr Macron’s plan further ignores the growing social issues in the country. After the aftermath of the Notre Dame fire in April, roughly one billion dollars were donated from people across the globe to rebuild the cathedral much to the dismay of the working poor of Paris. One protestor and her husband took the streets donning a yellow jacket in solidarity with the other French protestors outraged at Mr Macron and the government.

She said: “It’s unthinkable that it could be so easy to give money for stones.

“When we see human suffering, people are starving.

“Why do these people give to a building and not to people marching and who are hungry.”

Her husband agreed and concluded giving so much money like they have so much of it it is an “insult”. 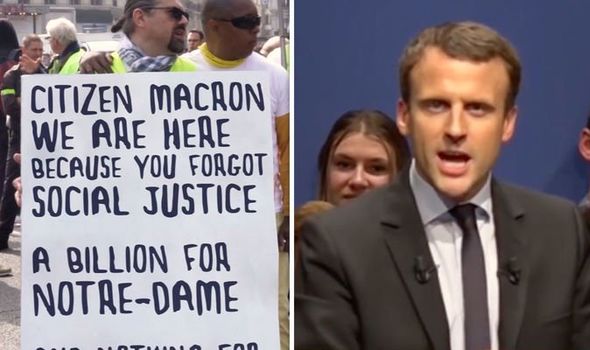 Protestors believe Mr Macron does not understand the plight and daily struggles and are “out of touch” with the everyday person.

Another protestor insisted the dedication to the cathedral was an embarrassment as there are many problems across the country that are “ignored”.

She said: “For me, Notre Dame is the past.

“We don’t need to make it exactly the same, we should make another cathedral.

“One billion euros in 24 hours, to see that it was just embarrassing.”

A yellow vest protestor also insisted that social issues were being pushed aside to focus on the Notre Dame restoration.

He argued: “They gave a billion to Notre Dame, while hospitals and schools are closing.

“Prioritising the reconstruction of a building over social rights.”

Despite Mr Macron taking action to ensure that change does happen across the country regarding the issues raised, many protestors are adamant they will continue until the government does more.