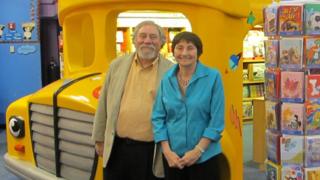 Joanna Cole, writer of the award-winning Magic School Bus series which made science fun for generations of children, has died at the age of 75.

She had been living in Sioux City, Iowa, with her husband Phil, her publisher Scholastic said.

As well as the best-selling Magic School Bus series, Ms Cole also wrote some 250 other books for children.

“Joanna’s books, packed with equal parts humour and information, made science both easy to understand and fun for the hundreds of millions of children around the world who read her books and watched the award-winning television series,” he added.

Joanna Cole began writing the Magic School Bus series in 1986, along with illustrator Bruce Degen. It featured a teacher, Ms Frizzle, who led her students on a series of adventures in the Magic School Bus – to places such as the human body, hurricanes and the solar system.

Together they went on to produce 13 books for the series, which led to some 93m print copies in 13 countries, Scholastic says.

Mr Degen said that “for Joanna the excitement was always in the idea. What? Why? How? And with The Magic School Bus it was how to explain it so that it is accurate and in a form that a kid can understand and use. And you can actually joke around while you are learning. She had a rare sense of what could be humorous.”

Ms Cole was already a published author when she was approached by Scholastic to write the Magic School Bus series; her first book for children was about cockroaches.

Tributes were paid to Ms Cole on social media by those who had grown up with her books, including actress Elizabeth Banks, who is set to play Ms Frizzle in a move-version of the series.

Sad to read this news tonight. Sending love to Joanna’s family. These books have brought so much joy to children for so many years and I am so honored I get to help shine a light on the legendary Ms. Frizzle. https://t.co/YAYEtt8CUT

As well as her husband, Ms Cole leaves a daughter, two grandchildren and a sister.

What are your memories of reading Joanna Cole’s books? Which of her stories had the most impact on you? Share your thoughts by emailing [email protected].

Please include a contact number if you are willing to speak to a BBC journalist.

Or use the form below:

If you are happy to be contacted by a BBC journalist please leave a telephone number that we can
contact you on. In some cases a selection of your comments will be published, displaying your name as
you provide it and location, unless you state otherwise. Your contact details will never be published.
When sending us pictures, video or eyewitness accounts at no time should you endanger yourself or others,
take any unnecessary risks or infringe any laws. Please ensure you have read the terms and conditions.