The majority of Britons want the UK’s foreign travel ban to last until next year – and most have no intention of going on holiday this summer.

Some 55 per cent back extending the Covid restrictions on non-essential trips abroad into 2022 – while just 21 per cent would oppose the idea.

Meanwhile, 43 per cent say they are not planning to go anywhere at all on holiday this summer, with only a quarter harbouring hopes of a break in another country.

The findings, in an exclusive poll for MailOnline by Redfield & Wilton Strategies, underline the level of nervousness among the population after a year of brutal lockdowns.

It comes as ministers try to rush through ‘Covid passports’ in time for the scheduled easing of the non-essential travel ban on May 17. 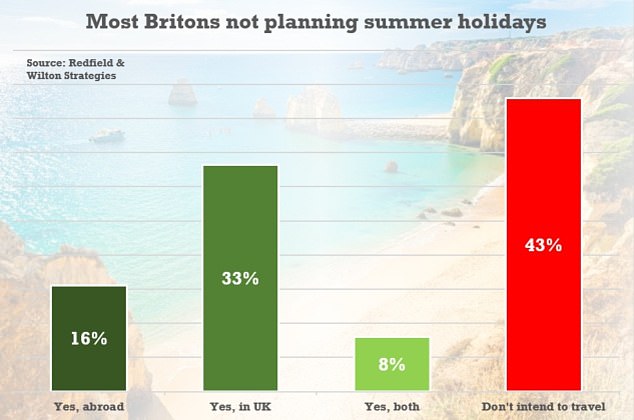 According to a new poll, 43 per cent of Brits are not planning to go anywhere at all on holiday this summer, with only 16 per cent harbouring hopes of a break in another country 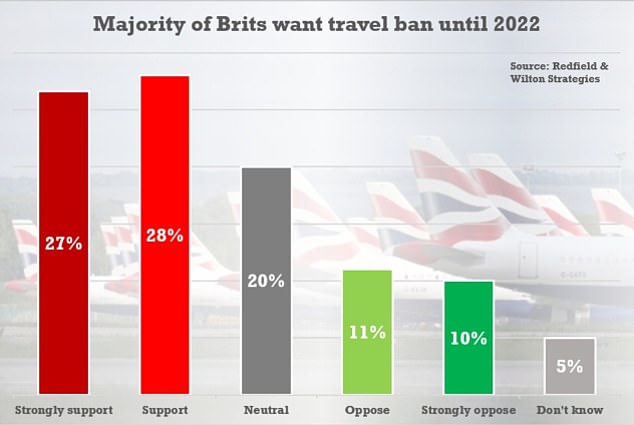 Greece is ready to welcome vaccinated British tourists immediately while Spain and Portugal will throw open their borders from June.

The European Union’s ban on visitors is not expected to apply to the UK because of its world-leading jab programme that has seen more than 33million get one dose and 10million of those receive both doses already.

But there appears to be limited appetite from the public for the reopening, after ministers repeatedly warned about the threat of importing mutant strains of the virus.

Some 43 per cent have no intention of going on holiday anywhere this summer, according to the poll this week.

Just 16 per cent are planning to go abroad, while 33 per cent are taking a break within the UK – and 8 per cent want to do both.

Asked about the idea of extending the ban on non-essential travel to the end of the year, 27 per cent said they ‘strongly’ supported such a move, and another 28 per cent were more mildly in favour.

Some 21 per cent were opposed, 10 per cent ‘strongly’, and a fifth were neutral on the issue.

A Government source told MailOnline that the Covid passport scheme would be in place next month to help people who want to travel to countries that are requiring proof of vaccination – but the source insisted that the key factor for Britons will be the rules on quarantine when returning to the UK.

‘You’ve got countries saying we will welcome you. But it depends what the precautions on return are. We will have that green amber red system. It is about what you face when you come back to the UK…. Can you isolate for 10 days?’, the insider said.

And they suggested that holidaymakers will not know what countries fall into what ‘traffic light’ category until around a week before May 17.

The criteria for assessing countries are set to include whether there are variants of concern, how good their genomic scanning system is, vaccination levels, and overall infection levels.

‘That will all become clear much nearer the time,’ one source said. ‘India has just gone off… You’re going to book a holiday in Spain in June? Well, good luck, but just make sure you are insured.’

Ministers are believed to be looking at whether islands can be treated separately from the mainland in some countries.

Madeira was previously restricted when it had low cases, as Portugal was suffering high infection rates. Greece is also said to be trying to make individual islands Covid-free to help with restoring tourism.

Spanish Tourism Secretary Fernando Valdés said today his country is ‘ready’ for UK holidaymakers to travel to Spain and ‘restart holidays’, adding: ‘We are desperate to welcome you this summer. We’ve been having constant conversations with UK authorities’.

Mr Valdes confirmed the plan was for British holidaymakers to arrive from June, adding that a travel corridor between the two countries is firmly on the table with covid passports ‘easing’ the return of ‘safe’ travel.

He said: ‘I believe that certificates is going to help us. Since the beginning of the pandemic we have been trying to put in place different means to help safe tourism. It is true we have passed through some waves of this pandemic, this virus, but now I think we are ready because we do have vaccinations. We have been having constant conversations with UK authorities, these certificates are going to ease travel and help tourism from this summer on’.

The EU’s plans, code-named ‘gettogether’ in Brussels, should allow vaccinated travellers to travel freely and avoid tests and quarantine, bringing hope to millions desperate to go abroad on holiday or to see family this summer for the first time in more than a year.

Officials from the EU’s 27 member states held their first meeting this week to discuss the plans but are already said to have decided that vaccination rates will be the key metric when deciding who can visit the bloc.

Insiders say Britain will ‘certainly’ be among the first to be allowed in through the vaccine passport scheme, with June touted as a start date. The country’s case was helped further yesterday when it fell out of the 20 worst-hit countries for excess deaths during the coronavirus pandemic, for the first time.

In tandem with EU countries opening up for all vaccinated British travellers in around six weeks’ time, UK travel industry sources claim they have been told Covid passports are expected to be brought in from next month as Michael Gove was sent to Israel to study their ‘green pass’ app as a potential model. Paper options will also be available for people without smart phones, according to NHSX, the digital arm of the health service developing it.

Greece has already dropped its quarantine rules for travellers from more than 30 nations if they have been vaccinated or tested negative for Covid-19 from May 15 – two days before Brits can travel again.  More than 20 other countries, including Spain, Croatia, Turkey, Portugal and Cyprus, have suggested that they may ask arrivals for vaccination proof.