Abdulla Yameen lifts emergency a day after an ex-president and two top judges were put on trial on terrorism charges. 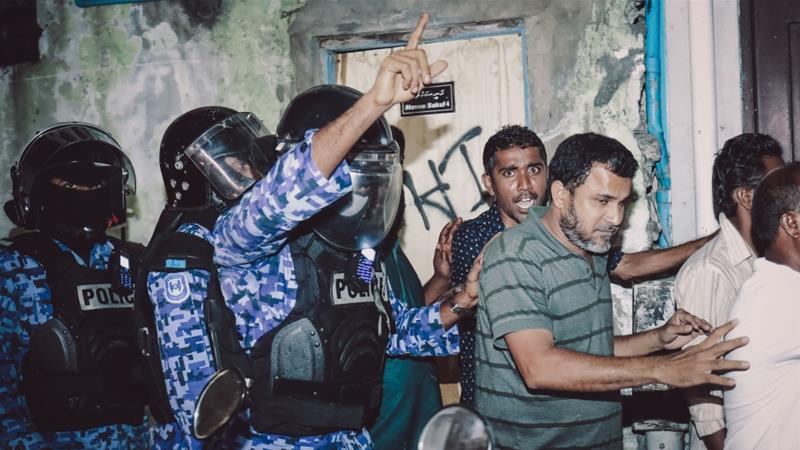 Maldives’ President Abdulla Yameen has lifted a 45-day state of emergency he imposed after the island nation’s Supreme Court overturned criminal convictions against nine of his opponents.

In a statement on Thursday, the president’s office said Yameen lifted the emergency “in an effort to promote normalcy” despite there still existing a “diminished threat to national security”.

Under the emergency, security forces arrested former President Maumoon Abdul Gayoom, Yameen’s half-brother, as well as two Supreme Court judges and a top judicial administrator on charges of trying to topple the government.

All four were charged with terrorism on Wednesday.

A court in the capital, Male, ordered they be held until the end of their trials.

If convicted of terrorism, they could be jailed for up to 15 years. The two judges and their aide have also been charged with receiving bribes to help overthrow the government.

Mohamed Nasheed, the Indian Ocean archipelago’s exiled former president, said Yameen lifted the emergency because “he now has no need for it”.

In a Twitter post, he said Yameen has “overrun the judiciary and legislature, arrested hundreds unlawfully and introduced a “new normal” in the Maldives – full dictatorship”.

Those arrested during the emergency included opposition parliamentarians, journalists and a former police chief.

Some 141 were detained on Friday alone when thousands of opposition supporters defied the emergency and staged a protest in the Maldives’ congested capital. Most have since been released.

The opposition accuse Yameen, who assumed power in 2013 following a disputed election, of abuses of power and siphoning millions of dollars from state coffers, allegations he has denied.

During his tenure, nearly all opposition leaders have been jailed or forced into exile. That includes the leaders of the coalition that brought him to power, two of his former vice presidents, as well as a former defence minister.

Meanwhile, following the arrest of Chief Justice Abdulla Saeed and Judge Ali Hameed on February 5, the remaining three judges on the Supreme Court reversed their earlier ruling ordering the release of dissidents.

They also suspended a section of the verdict that reinstated 12 parliamentarians who were removed for defecting to the opposition.

The 85-member parliament, where the ruling party holds a majority without the 12 defectors, then pushed through a law that strips judges of their seats if they are convicted of a criminal offence.

The parliament’s minority leader, Ibrahim Mohamed Solih was arrested under the emergency on Saturday and has been remanded for nine days.

In early February, Nasheed, the former president, had urged neighbouring India to send an envoy backed by its military to help free Gayoom and the political detainees.

India did not comment on the request, but said it was “deeply dismayed” by Yameen’s extension of the initial 15-day emergency in late February.

The emergency also drew criticism from the United States, and the European Union.

However, China, whose influence has been growing in the Maldives, said the crisis in the island nation was an “internal affair” and called on the international community to “respect the Maldives’ sovreignty and territorial integrity”.

The emergency also prompted a flurry of travel advisories to the Indian Ocean archipelago, known for its upmarket resorts.

Hundreds of hotel bookings were cancelled, according to media reports, but official figures show an increase in tourist arrivals in the month of February as compared with the same period last year.