For six years, Orus Coffield underwent treatment for a rare cancer. Before dying, he wrote his own obituary, a grateful reflection of his life that also includes his candid thoughts about how people talk about cancer.

“I’ll get this out of the way early: Cancer killed me. I know we all skim through the obits curious to know each person’s cause of death,” Coffield, 43, of Marlborough, Connecticut, wrote in his obituary. “After 6-plus years of treatments, anxiety, pain and occasional moments of hope it came down to the brutal truth that my body could no longer carry on.”

Coffield shared that he had myxoid liposarcoma, a cancer that develops in cells that store the body’s fat, according to the National Cancer Institute. About 2,000 people in the United States are diagnosed with it annually, and it most commonly occurs in people aged 20 to 40. Coffield received his diagnosis in 2016.

“This isn’t how I expected my final chapter would be written,” he wrote. “I had dreams just like anyone else of raising my kids, being a partner to my spouse for years to come, and enjoying growing old surrounded by the people I love.”

Still, he felt incredibly appreciative for his wife, Jennifer, and his four “amazing kids.” He also shares the wisdom he gained throughout his 43 years.

“My time on this Earth may have been shorter than I would like, but a life full of enriching experiences has resulted in some important lessons learned,” Coffield wrote. “Those lessons are simple too — be kind, be honest and be helpful. If any words we say or actions we take can’t meet those criteria then they are best left unsaid and undone.”

While the obituary includes how grateful Coffield felt and what he learned, it also conveyed his frustration with how people discuss cancer.

“A perk of writing my own obituary is that I get the last word and it is this: I never want my death due to cancer to be discussed in the style of ‘he lost his battle’ or ‘after a long valiant fight’ or any other similar language. Cancer isn’t an invader like a foreign virus or bacterium,” he shared. “Cancer is my own body’s DNA gone haywire. Who am I fighting against? My own body? Or maybe my body is a battlefield, in which case who is the enemy? And now that I have died due to cancer does this mean I didn’t fight hard enough or lacked the will to live? Of course not.” 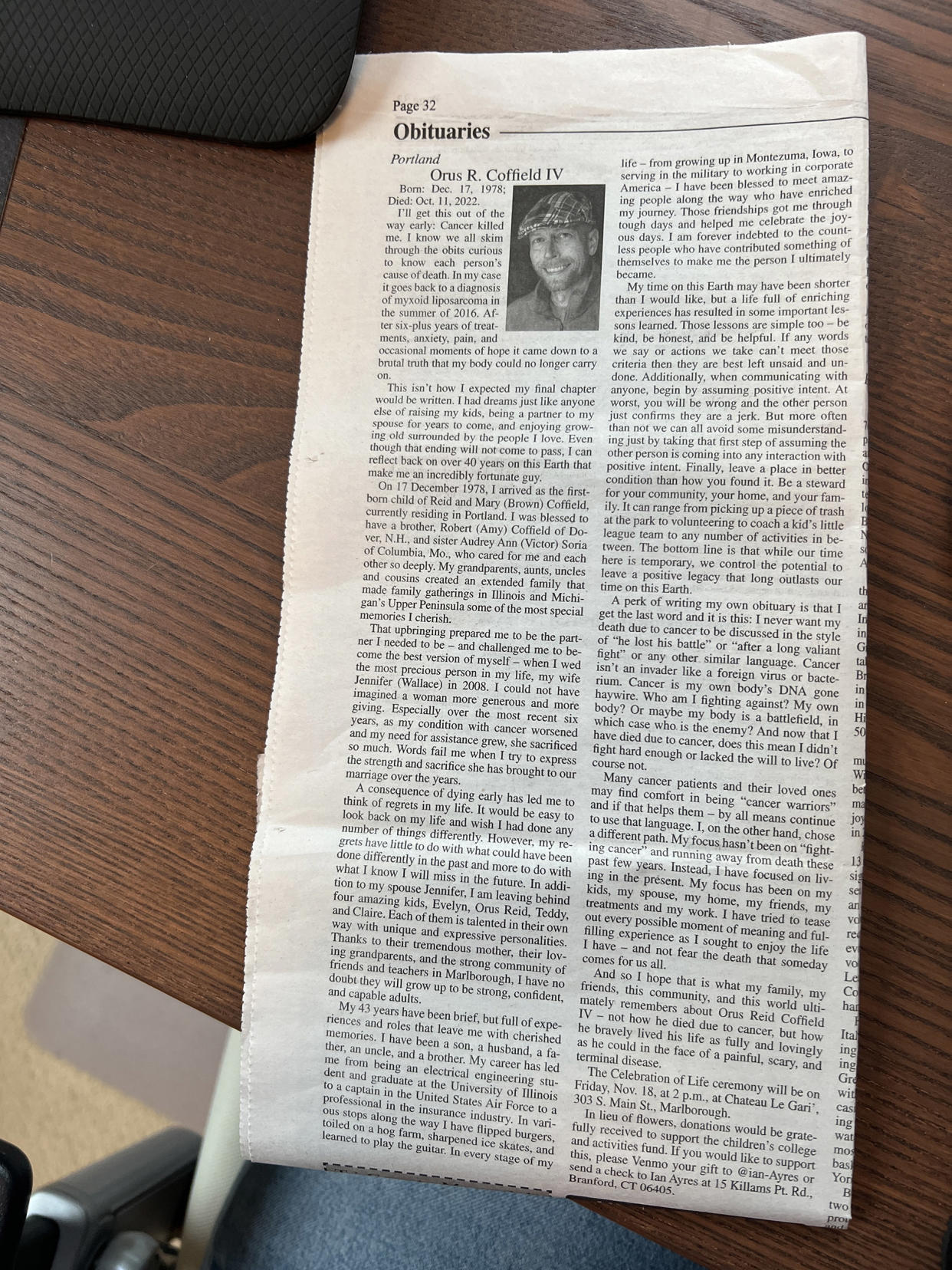 Annie Bond, who was diagnosed with metastatic breast cancer at 26, said that Coffield’s obituary confronts the idea of a cancer patient as a fighter, which often glosses over the reality of the illness.

“Cancer can really happen to anyone at any time,” the 33-year-old from Los Angeles tells TODAY.com. “Cancer is something that if we could figure it out and predict it, we would have been able to cure it by now. But it’s something that outsmarts the smartest doctors, the smartest scientists. So, this idea that someone didn’t fight hard enough, I think, is an insult because there’s nothing that you can do. Cancer treatment is luck.”

She says she understands what Coffield shared about cancer as a battle.

“Where is the battle? It’s with my own body,” she says. “How am I supposed to hate my own body and want to live?”

When Bond was diagnosed, doctors told her that her life expectancy was two to five years. It’s been seven years since she she learned she had terminal cancer, and her life is “beautiful.” She has been responding well to an oral chemotherapy that she’s taken since her diagnosis. People often attribute her successful treatment to strength, but she says that’s not exactly accurate.

“Saying somebody is this ‘big fighter’ it presents a false narrative to the reality of what cancer is,” she says. “It’s an unpredictable disease that is, in my opinion, the ultimately equalizer because it doesn’t care how good of a person you are, how much money you have, what your political affiliation is, if you’re a child.”

Bond felt moved by the care Coffield took in writing his obituary.

“It definitely made me cry because it’s just beautifully said,” she says. “The idea of having any type of control over your death is really powerful, especially when you have a terminal illness that you can’t control anything. There’s no control in cancer.”

Bond says that many cancer survivors “do find power in that language” of being fighter or engaged in battle and Coffield agreed that for some being a “cancer warrior” helps them grapple with their illness. Though, he shared that found something else that shaped how his life.

“I have focused living in the present. My focus has been on my kids, my spouse, my home, my friends, my treatments, and my work,” he said. “I have tried to tease out every possible moment of meaning and fulfilling experience as I sought to enjoy the life I have — and not fear the death that some day comes for us all.”

This article was originally published on TODAY.com