‘My knight in shining armour!’ Romantic man arrives at his partner’s house on a white stallion to propose

A romantic knight in shining armour rode on horseback to his girlfriend’s front door to propose to her.

Christopher Broderick, from Boston, Massachusetts, donned the armour and shield emblazoned with his family’s coat of arms after researching his own Irish heritage online.

After joking with his partner Cindy MacDonald, he claimed he was her very own knight in shining armour and decided to bring the character to life. 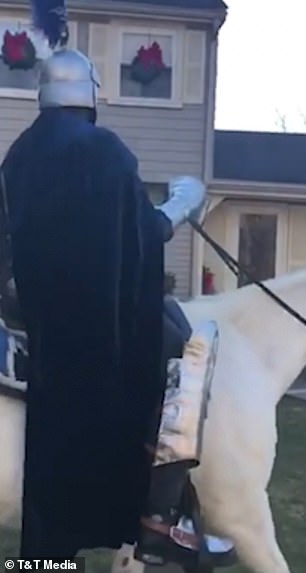 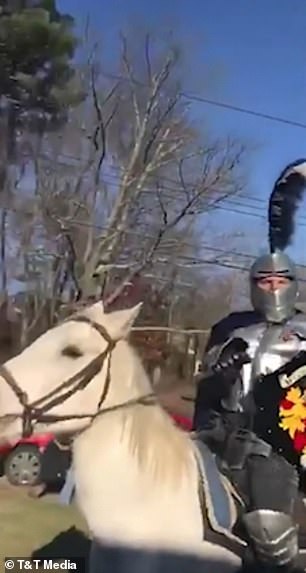 Christopher Broderick, 57, arrived at his partner’s home on horseback to propose to her

Mr Broderick, 57, said: ‘The idea started as I was researching my Irish heritage and came across the family coat of arms.

‘That was the first item that drew me to a shield and then a sword. I was falling deeply in love with Cindy and was joking telling her I was her knight in shining armor.

‘Then I started the plan to become a real life knight and asked a friend to help find a white horse, had the shield made up by a specialist company.

‘Amazingly I was able to rent the suit of armor from a rental company so that I had the full outfit.

‘The only thing left was to arrange the place. I discreetly contacted Cindy’s sister and we planned a luncheon date at Cindy’s to make sure she would be there when I arrived on horseback.

‘The rest is history!’

Footage shows Mr Broderick sat on top of a white stallion in a car park just a few houses away from Ms MacDonald’s home.

Mr Broderick got down on one knee to propose to his partner, who said yes to him before breaking out in tears of joys

As he crosses his partner’s lawn, a visibly shocked Ms MacDonald opens her door with her mouth agape.

Mr Broderick shouts ‘I want you to be my wife’ before jumping down from his horse and dropping onto one knee.

As a sobbing Ms MacDonald nods her approval, onlookers whoop and holler in appreciation.

Ms MacDonald, 53, said: ‘I heard my sister say, “Hey, what’s that?” And as I turned around I saw a horse and a knight in shining armor sat on my lawn!

‘I thought it was so romantic.’

The soon-to-be newlyweds have been dating for four years and bonded over their shared love of Ireland, where they have each traced their ancestry.

The couple – who have been dating for four years – bonded over their shared love of Ireland, where they’ve each traced their ancestry.

Mr Broderick, a building inspector, added: ‘We had an incredible day – it couldn’t have gone more to plan.’

Although no date has been set for the wedding, they have already decided to put the shield up on display in their new marital home.