A 76-year-old man charged with inciting an anti-lockdown protest in Melbourne during Victoria’s second wave of COVID-19 has argued his case should be heard in the High Court of Australia.

Solihin Millin was arrested on August 28 last year and charged with incitement over a “freedom rally” protest against Victoria’s lockdown restrictions held at the Shrine of Remembrance and Albert Park on September 5. 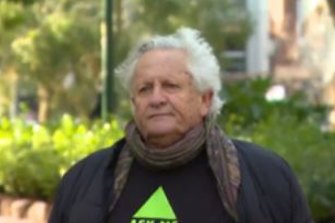 Court documents show Mr Millin is accused of promoting a planned protest between August 16 and August 27 last year, with the intention to incite people to contravene orders within the Public Health and Wellbeing Act 2008 and “encouraging them to not wear masks and also to leave their residence without a specified reason”.

Mr Millin faced the Melbourne Magistrates Court on Monday morning, where he told the court he did not have a lawyer and was self-represented.

Magistrate Lance Martin told him that normally the case would proceed to a summary case conference where the parties could discuss the matter and see if it could be resolved or define the issues in dispute. 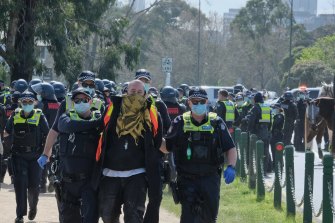 However, Mr Millin responded saying he wanted the matter to be heard in a higher court.

“Well, Your Honour, I appear for myself and have raised a constitutional defence to the charges,” he said.

“Thus, Your Honour, this court is now under federal jurisdiction and I am lodging my section 40 application which is my right under the constitution and under the Judiciary Act to remove part of this proceeding, the questions of law, to the High Court of Australia for adjudication.”

Mr Millin asked the police prosecutor to produce a “certified copy or original biosecurity control order under the federal Biosecurity Act 2015 that has been issued against me”.

“I demand the court dismiss this matter as these charges have no evidence,” Mr Millin said.

Mr Martin set down a half-day hearing to deal with the jurisdictional argument.

“The situation is this,” he said. “You are presenting an argument to the court that the court does not have the jurisdiction to hear and determine the charge of incitement. I cannot determine that issue today, it hasn’t been booked in.

“If you are asserting there is no jurisdiction in the court to hear the matter, the carriage or burden of that lies with you to show that.

“What I’m going to do is adjourn to a date where there is time for the matter to be properly argued by yourself.”

Mr Millin’s bail was extended to his next court date on February 17.

Mr Millin is one of a number of people facing court charged with incitement in relation to anti-lockdown protests held last year.

Tony Pecora, 43, who is charged with two counts of incitement for allegedly encouraging others to attend a “walk for freedom” in September last year, is next due to front court in June.

Ballarat mother Zoe Buhler is charged with inciting others to attend a protest that was held in the regional city in September. She is due to appear before court later this month.

Another man is due in court on Tuesday, and two other men – one in his 20s and one in his 30s – are due to front court later this year. All are charged with separate incitement charges.