A snake farm manager has died after being bitten by a 10ft black mamba while trying to extract venom to be used for medical research.

Ryan Soobrayan, who had recently gotten engaged, died the day before his 27th birthday after being bitten by the snake at African Reptiles and Venom in Johannesburg, South Africa.

Just one fang punctured the experienced herpetologist’s finger, but as the black mamba is one of the world’s most poisonous snakes, no more than two drops of venom can be enough to kill. 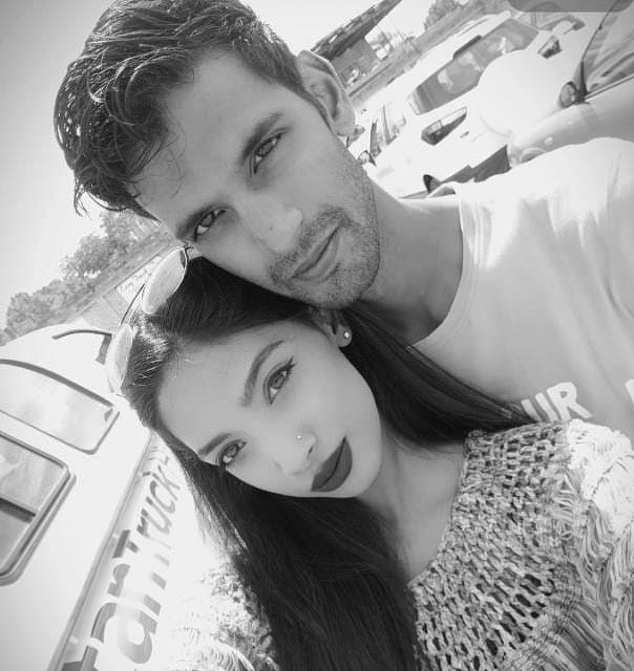 Heartbreaking: Ryan Soobrayan, pictured with his fiancée Jackie Sewcheran, died after being bitten by a black mamba at the reptile centre where he worked

Mr Soobrayan immediately summoned help from colleagues, but despite their efforts, he collapsed and went into anaphylactic shock and died.

The snake farm’s owner Mike Perry said Mr Soobrayan had been responsible for venom extraction at the centre, and he often trained others how to do it.

Mr Perry said: ‘His untimely demise was not due to the bite but as a result of anaphylaxis. We are devastated by the incident. He had a severe allergic reaction to the mamba venom’.

African Reptiles and Venom provides snake identification and awareness programmes along with snakebite treatment and first aid training to assist those who have been bitten by a poisonous snake.

Herpetologist Johan Morais at the African Snakebite Institute said the black mamba was highly dangerous and a person would normally die between three and 16 hours without anti-venom. 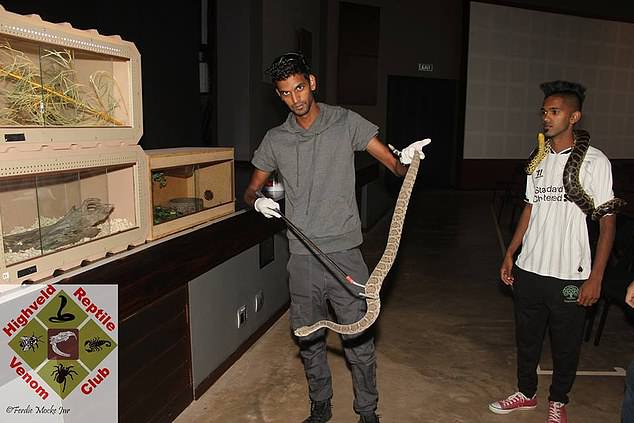 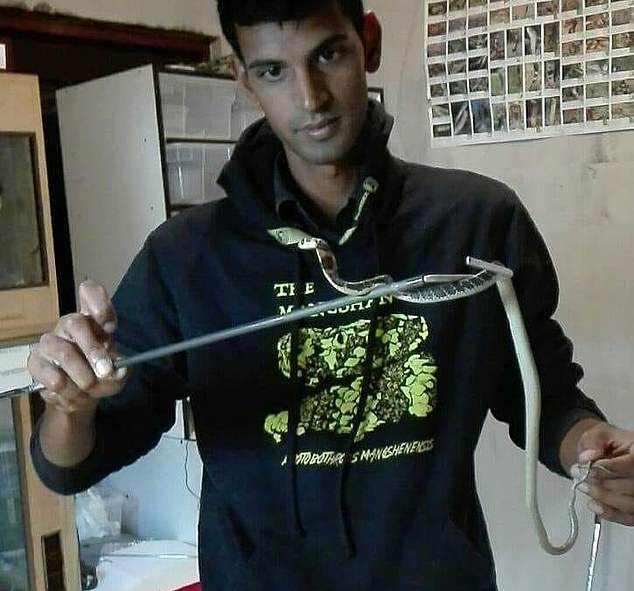 Just one fang punctured Mr Soobrayan’s finger, but despite efforts his colleagues made, he collapsed and went into anaphylactic shock and died

He said: ‘You need to get to hospital as quickly as possible black mambas have neurotoxic venom which affects the breathing and at hospital they can assist you with a ventilator.

‘What is strange here is that he did not from the venom but his body went into shock from it’.

Mr Soobrayan’s devastated fiancée Jackie Sewcheran who got engaged to him in April said on Facebook: ‘You always wanted to make an impact on the world my love– look at what you have done.

‘You were the most amazing person I’ve ever known. I have no words to describe you, no words to say because nothing will ever be enough. What you were doing was just so heroic’. 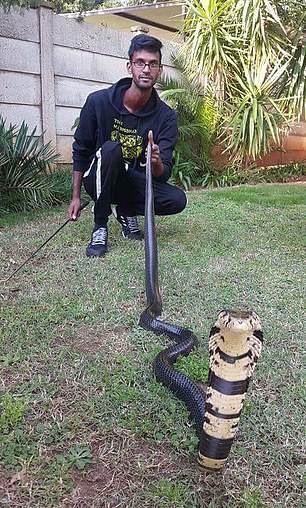 Passionate: His family members have spoken of his love for his job on social media

His uncle Eugene Soobrayan said: ‘He died before he could turn 27 years old. Snakes had been his passion.

‘His family, his two sisters, and his parents are still coming to terms with it.

Catherine Soobrayan said her brother was an expert in snake handling and lost his live doing what he loved saying: ‘To all those who have sent their love, we really appreciate it.

‘Our life will never be the same. He made a difference in everyone’s life, wherever he went.

‘Everyone who knows my brother knows he was always careful. This was a terrible accident’.

Snake catcher and close friend Shaun Venter said: ‘People like Ryan who work on extracting venom for medicine and research are unsung heroes and he did this work to help others.

‘He got a small pinprick on the thumb and had a massive negative reaction. He was assisted by the best in the country and everything was done to try and save this awesome soul’.

Kurt Schatzl, the President at New England Herpetological Society, said millions of people are being kept alive by medication created with snake venom through years of medical research.

He said: ‘There is only one way to get that venom and you have to handle adult venomous snakes with your hands. It is incredibly dangerous and also incredibly altruistic and heroic.

‘If you are taking high blood pressure or anticoagulant medicines you owe your very life to individuals like this. People like Ryan work out of the limelight for the good of humanity’.

Black mambas can grow up to 14 feet long and are the fastest moving snake in the world and anyone bitten by one will face almost certain death without urgent anti-venom treatment.