A husband and wife continue to fight for their lives in hospital following the suspected gas explosion which killed their two-year-old neighbour.

George Arthur Hinds, aged two years and 10 months, was killed by the blast on Mallowdale Avenue in Heysham, Lancashire, on Sunday.

A married couple who are neighbours to the toddler’s family, named locally as Sharon, 50, and Darren, 44, remain in a critical condition in hospital, the Sun reports.

George’s parents were not seriously injured in the blast, which left his mother Vicky Studholme, 41, pinned under a wardrobe in the rubble of the home and his father Stephen Hinds, 42, wounded in the street, the Sun reports.

Emergency services were called to the scene of the blast at about 2.40am and found two houses collapsed with serious damage to a third property.

The cause of the suspected gas explosion, which was said by neighbours to have been caused by a faulty gas fire, will likely not be known for ‘some considerable time’, a police chief said today. 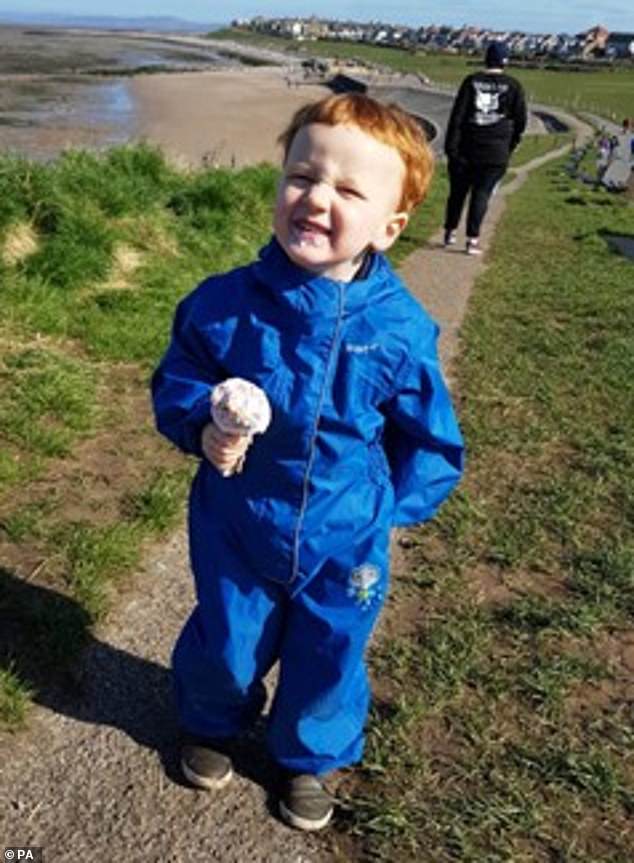 George Arthur Hinds, aged two years and 10 months, was killed by the blast on Mallowdale Avenue in Heysham, Lancashire, on Sunday

Chief Inspector Chris Hardy, of Lancashire Constabulary, said today: ‘This appalling incident has resulted in the loss of a young boy’s life and has left two others with very serious injuries.

‘My thoughts today are with George’s family and loved ones at this sad time, as well as those others affected by this incident.

‘While we have today started our enquiries, alongside our partners, into what led to yesterday’s explosion I must stress that we are faced with an extremely complex scene which needs painstaking and forensic investigation. I appreciate that the community are concerned and want answers but I’m afraid it is likely to take some considerable time before we are in a position to provide them.

‘I would like to appeal to anyone who may have information which could assist our investigation to come forward and contact us. Even if you think the information you have is insignificant or irrelevant please tell us and we can be the judge. 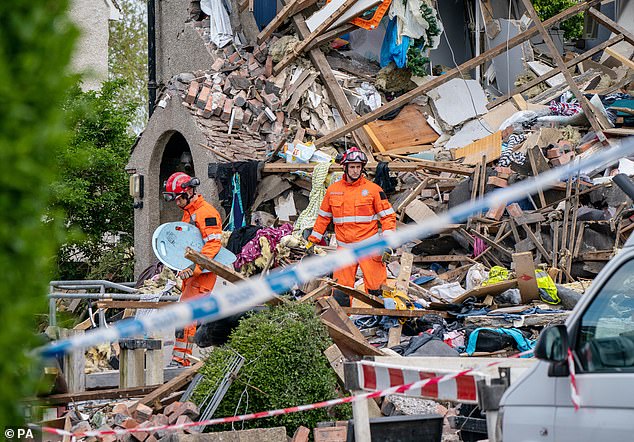 Emergency workers at the scene of a suspected gas explosion, in which two-year-old George Arthur Hinds was killed and two people were seriously injured, on Mallowdale Ave, Heysham 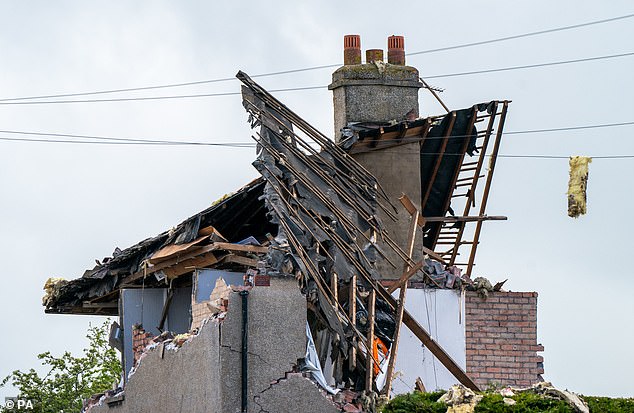 Fundraiser for Heysham blast raises more than £41,000 in one day 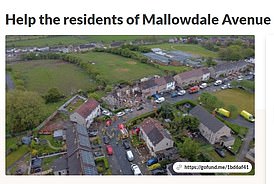 A fundraiser set up in the wake of a suspected gas blast that killed a young child and destroyed three houses has raised £41,727 in just one day.

Residents of Mallowdale Avenue in Heysham, Lancashire, were woken in the early hours of Sunday by an explosion which left nearby streets and fields covered with debris.

Heather Brandwood set up a GoFundMe appeal after seeing the explosion on the news.

She said: ‘Although we don’t know any of the people personally, we don’t need to know someone’s name or face to help them.

‘People have really pulled together as a community, it’s really humbling. Anything we can do that might relieve a bit of pressure and a little bit of stress for those involved is worth doing.’

Ms Brandwood said: ‘The general public has been fantastic.

‘There are a lot of people who want to do good, but they don’t know how to go about doing it, so by putting something in place, they always rise to the challenge.

‘There is a lot of goodwill in Morecambe.’

Donations can be made here.

‘I would also ask that people try and avoid speculating about what may have happened and what the cause of this tragic incident may have been and give police and partners the time and space to make the enquiries they need to get to the truth.’

George’s parents Vicky Studholme and Stephen Hinds were also injured, but not seriously, and have since been discharged from hospital.

In a tribute to their son, they said: ‘We are devastated at the loss of our beautiful George.

‘He was so precious to us. We have no words to describe how we feel and just want time to ourselves to come to terms with what has happened.

Residents described the noise of the blast as ‘like a bomb going off’, with debris that covered nearby streets and fields.

Dan Knowles, who lives four streets away, said he thought there had been an earthquake.

Mr Knowles said: ‘My wife and I thought there was an earthquake which woke us, the whole house shook.

‘We immediately checked on our kids and got back in bed. We then heard sirens and my wife checked Facebook, when we found out that there’d been a gas explosion. We stayed indoors and switched everything off at the source and then sat up all night worrying.’

Another neighbour, Susan Faulkner, said it was ‘like a bomb going off’ and that she still felt shaken. ‘I woke up with this huge bang and I thought someone was breaking into my house,’ she said. ‘The sound really shook me, I’m still quite shaken by it. I’ve never experienced that before.’

Emilie Downie, 18, said: ‘It was the loudest bang I’ve ever heard in my life.I was in bed when I heard a flash. I thought it might have been from the power station nearby. Within five minutes the police, ambulance and fire services were here. People were screaming.

‘It is terrible and so sad that the little boy has lost his life. It’s devastating.’

One neighbour said: ‘We heard a big bang at 2.30am when we were in bed. ‘We looked out of the window to see what was going on and were concerned because our daughter’s house was close to the blast. 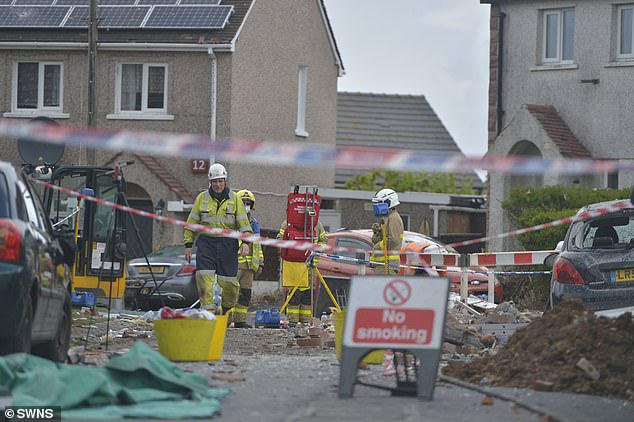 The scene Sunday morning at Mallowdale Avenue, Heysham after a suspected gas explosion 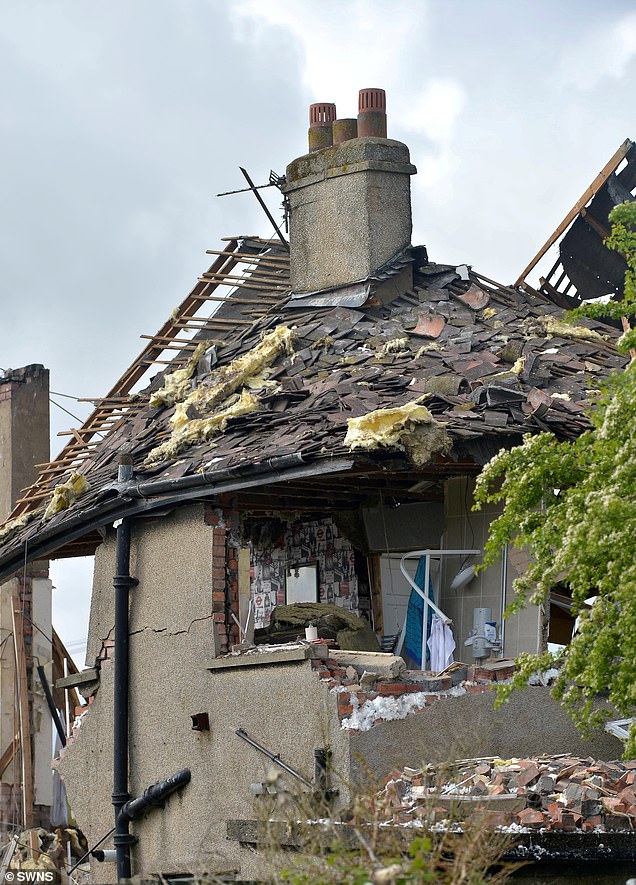 The scene this morning at Mallowdale Avenue, Heysham after a suspected gas explosion 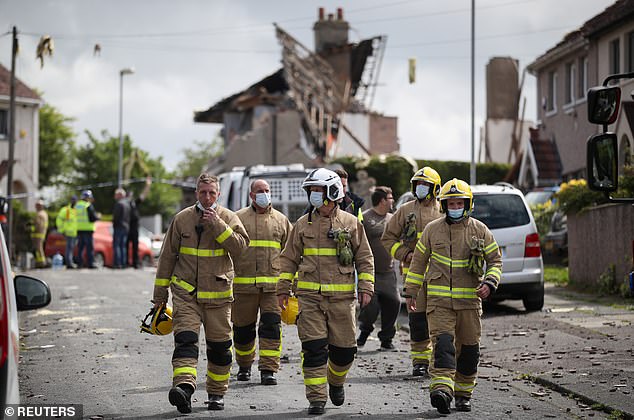 ‘When we got out, I saw the devastation. It was awful.’

Rachel Smith, 42, said: ‘It seemed like a bomb going off as the whole bed shook. I thought the bed was going to go through the floor. I jumped out of bed and looked outside.

‘It was awful. There was rubble everywhere. Then we heard that the little boy had died.’ Bricks and roof tiles were strewn across streets around 300 yards away.