A video mashup of Brett Kavanaugh’s testimony on the sexual assault allegations against him and an iconic scene from Pulp Fiction has gone viral on social media.

Footage from Trump’s Supreme Court nominee’s impassioned opening statements before the Senate Judiciary Committee Thursday has been cut with footage from the 1994 Quentin Tarantino classic, making it appear as if Kavanaugh is being threatened by hitman Jules Winnfield, portrayed by Samuel L Jackson.

Viewers have praised the clip for providing a humorous release following two straight days of tension surrounding the senate showdown between Kavanaugh and the woman who claims the judge assaulted her at a high school party 36 years ago, Dr Christine Blasey Ford. 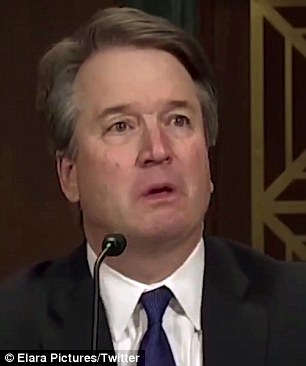 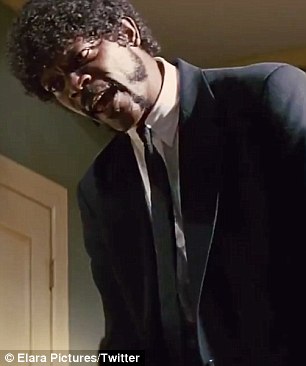 A mashup of clips from Brett Kavanaugh’s Thursday testimony on sexual assault allegations and an iconic scene from the film Pulp Fiction appears to show the Supreme Court nominee being threatened by fictional hitman Jordan Winnfield, portrayed by Samuel L Jackson

CHECK OUT THE BIG BRAIN ON BRETT

It then cuts to Kavanaugh at the hearing, who says: ‘Correct.’

Winnfield replies: ‘I thought so.’

Appearing nervous in the edited version, Kavanaugh says: ‘Uh, I got into Yale Law School.’

The hitman responds with one of the film’s most iconic lines: ‘Check out the big brain on Brett!’

Without provocation, Kavanaugh brags: ‘It’s the number one law school in the country, I had no connections there, I got there by busting my tail. 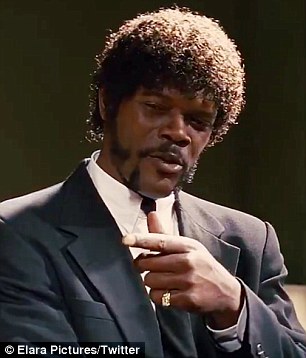 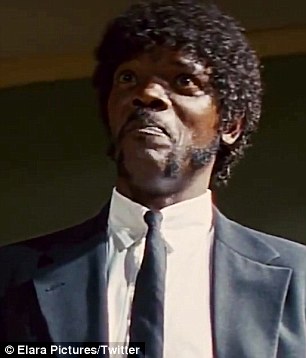 The video compiled by production company Elara Pictures shows Winnfield confronting a character by the judge’s name, including the iconic line: ‘Check out the big brain on Brett!’ 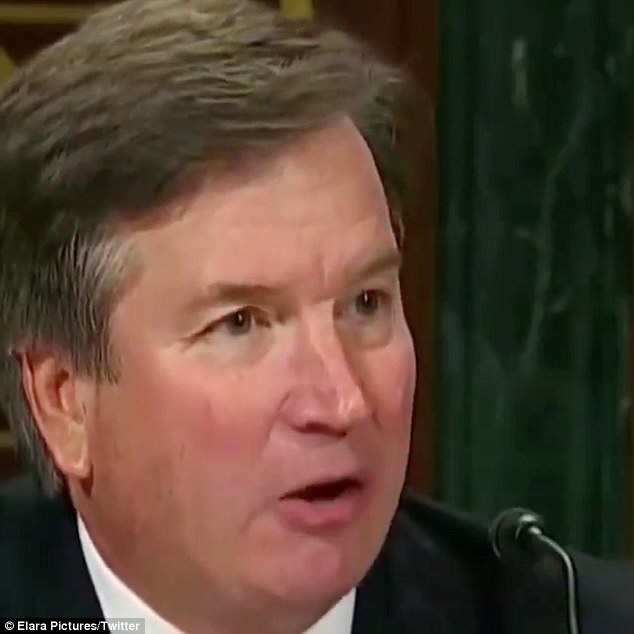 The Kavanaugh clips were taken from the judge’s opening remarks during Thursday’s senate showdown, during which Dr Christine Blasey Ford testified that Kavanaugh assaulted her at a high school party 36 years ago

The video then cuts to the portion of Kavanaugh’s testimony where the nominee made several strange comments about his relationship with alcohol – responding to Dr Ford’s claims that he was blacked out when the alleged assault occurs.

Winnfield says: ‘Looks like me and Vincent caught you boys at breakfast. Sorry about that. What are you having?’

‘Hmm, you mind if I have some of your tasty beverage to wash this down?’ Winnfield says as he picks up a paper cup and slurps loudly from the straw.

Kavanaugh continues: ‘Sometimes I had too many beers, but I did not drink beer to the point of blacking out, and I never sexually assaulted anyone.’

The tension peaks as Winnfield bellows: ‘Yes you did! Yes you did, Brett!’ causing the movie character Brett to tremble and whimper. 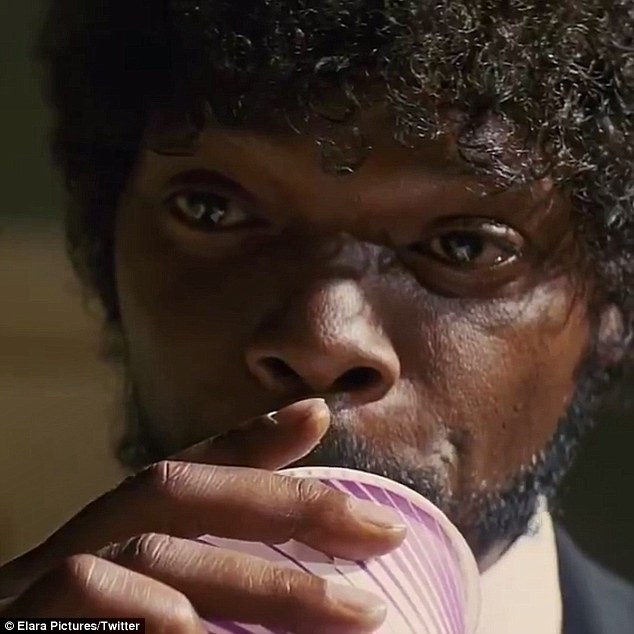 Winnfield loudly sips through a straw as Kavanaugh is heard in the clip describing his relationship with beer, defending himself against allegations that he was black-out drunk when he allegedly pinned Dr Ford down on a bed and tried to take off her clothes 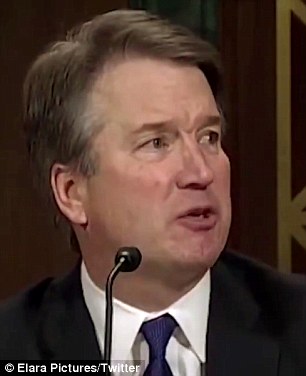 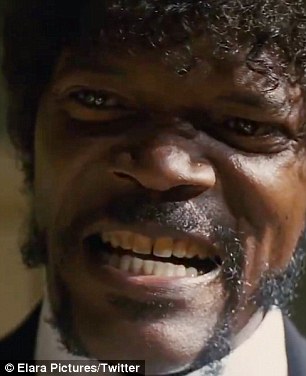 Kavanaugh says: ‘Sometimes I had too many beers, but I did not drink beer to the point of blacking out, and I never sexually assaulted anyone.’ Winnfield then bellows: ‘Yes you did! Yes you did, Brett!’ 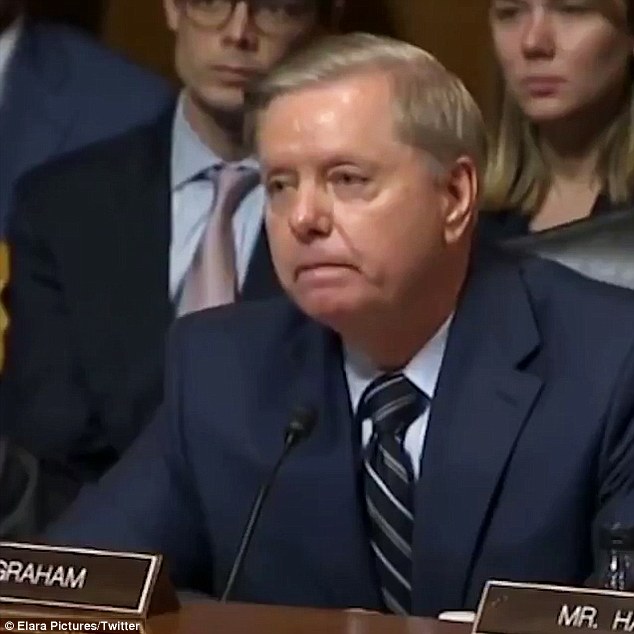 The video then cuts to Sen Lindsay Graham’s defiant defense of Kavanaugh, to which Winnfield replies: ‘I don’t remember asking you a godd**n thing’

The video then cuts an indignant defense of Kavanaugh by Sen Lindsey Graham, who says: ‘He is warm, friendly, unassuming, he is the nicest person -‘

Winnfield cuts Graham off by shouting: ‘I don’t remember asking you a godd**n thing.’

The video ends with Winnfield calmly saying: ‘Oh I’m sorry, did I break your concentration?’ as Kavanaugh is shown on screen wearing a blank stare.

It cuts off right at the point where movie Brett is murdered by Winnfield.

The video has been viewed nearly 80,000 times on Instagram alone and shared more than 86,000 times on Twitter as of Friday night.

As social media users commended the creativity behind the juxtaposition, Jackson reacted to the use of his Winnfield portrayal in a tweet, writing: ‘Funny as hell, but there’s nothing funny about his Lying Fratboy Ass!!!’ – a reference to Kavanaugh. 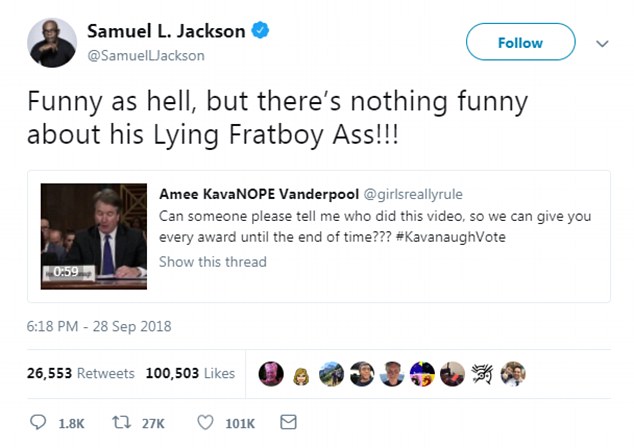 Samuel L Jackson, who portrayed Winnfield in the 1994 Quentin Tarantino film, retweeted the video saying it was ‘funny as hell’ – unlike the senate proceedings themselves 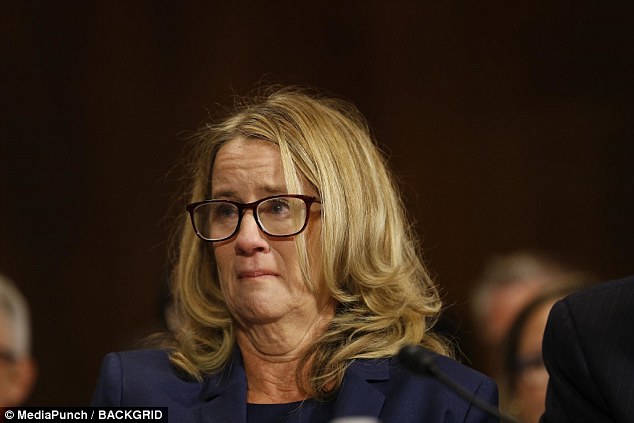