Matt Hancock unlawfully failed to publish details of billions of pounds’ worth of coronavirus-related contracts, the High Court has ruled.

The Good Law Project took legal action against the Department of Health and Social Care (DHSC) for its ‘wholesale failure’ to disclose details of contracts agreed during the Covid-19 pandemic.

The Government is required by law to publish a ‘contract award notice’ within 30 days of the award of any contracts for public goods or services worth more than £120,000.

At a hearing earlier this month, the Good Law Project and three MPs – Labour’s Debbie Abrahams, the Green Party’s Caroline Lucas and Liberal Democrat Layla Moran – argued there had been a ‘dismal’ failure by the DHSC to comply with the obligation. 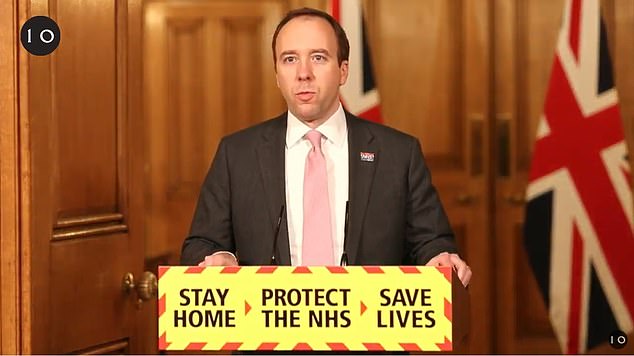 The Good Law Project took legal action against the Department of Health and Social Care (DHSC) for its ‘wholesale failure’ to disclose details of contracts agreed during the Covid-19 pandemic. Pictured, Matt Hancock

They also claimed the Government was breaching its own transparency policy, which requires the publication of details of public contracts worth more than £10,000.

In a ruling on Friday, Mr Justice Chamberlain said: ‘There is now no dispute that, in a substantial number of cases, the Secretary of State breached his legal obligation to publish contract award notices within 30 days of the award of contracts.

‘There is also no dispute that the Secretary of State failed to publish redacted contracts in accordance with the transparency policy.’

The judge said that the obligations to publish details of such contracts ‘serve a vital public function and that function was no less important during a pandemic’.

He added: ‘The Secretary of State spent vast quantities of public money on pandemic-related procurements during 2020. 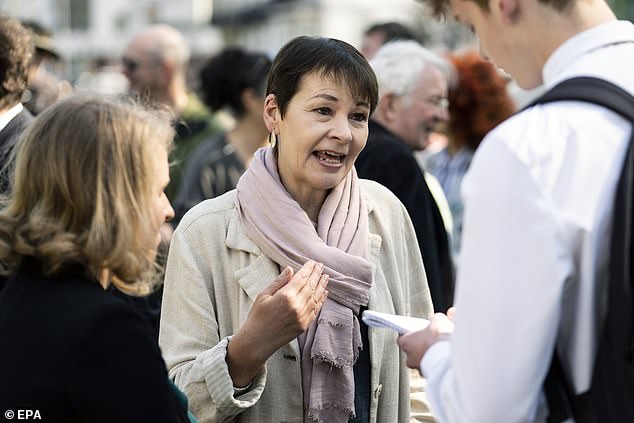 At a hearing earlier this month, the Good Law Project and three MPs – Labour’s Debbie Abrahams, the Green Party’s Caroline Lucas (pictured) and Liberal Democrat Layla Moran – argued there had been a ‘dismal’ failure by the DHSC to comply with the obligation

‘The public were entitled see who this money was going to, what it was being spent on and how the relevant contracts were awarded.

‘This was important not only so that competitors of those awarded contracts could understand whether the obligations … had been breached, but also so that oversight bodies such as the National Audit Office, as well as Parliament and the public, could scrutinise and ask questions about this expenditure.’

Mr Justice Chamberlain said the situation the DHSC faced in the first months of the pandemic was ‘unprecedented’, when ‘large quantities of goods and services had to be procured in very short timescales’.

The judge said it was ‘understandable that attention was focused on procuring what was thought necessary to save lives’.

But he added that the DHSC’s ‘historic failure’ to comply with the obligations to publish contracts because of the difficulties caused by the pandemic was ‘an excuse, not a justification’. 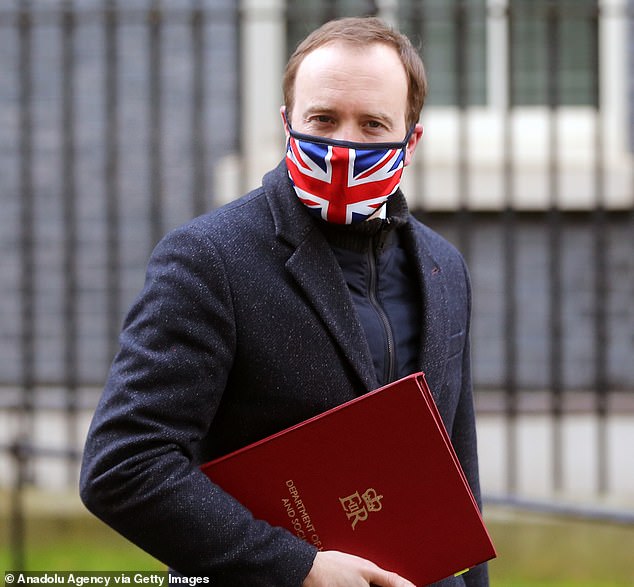 Mr Justice Chamberlain said the situation the DHSC faced in the first months of the pandemic was ‘unprecedented’, when ‘large quantities of goods and services had to be procured in very short timescales’. Pictured, Mr Hancock

Mr Justice Chamberlain rejected the Good Law Project’s argument that there had been a department-wide ‘policy of de-prioritising compliance’ with the requirement to publish contract details.

In a statement after the ruling, the Good Law Project said: ‘This judgement is a victory for all of us concerned with proper governance and proof of the power of litigation to hold Government to account.

‘But there is still a long way to go before the Government’s house is in order.’

In a letter to Health Secretary Matt Hancock, the Good Law Project’s founder Jolyon Maugham QC invited the minister to agree to publish the names of all companies awarded public contracts under a fast-track ‘VIP lane’ and how much they were paid.

Mr Maugham also asked Mr Hancock to ‘commit to recovering public money from all the companies who failed to meet their contractual obligations’ and set up ‘a judge-led public inquiry into the handling of PPE procurement’.

Ms Abrahams said in a tweet: ‘The significance of this ruling cannot be underestimated. It seems odd having to make this point but the Government must act within the law when awarding contracts.’ 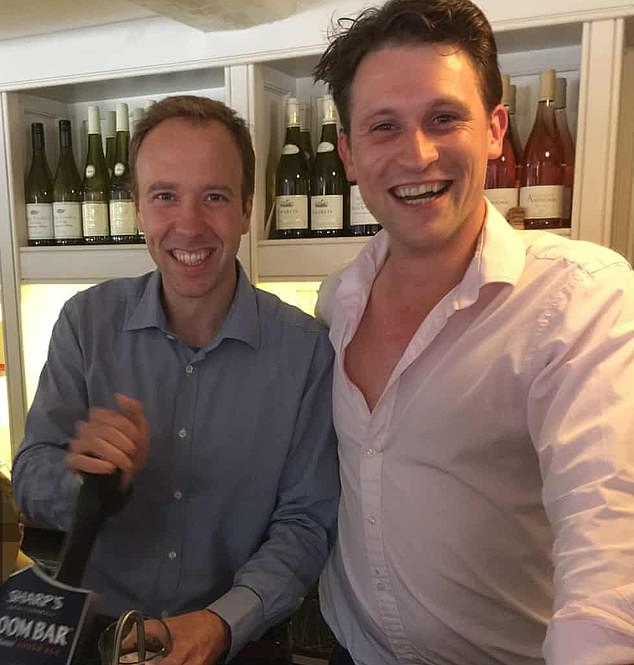 Alex Bourne with Health Secretary Matt Hancock when he was landlord of the Cock Inn in Thurlow, West Suffolk. He was asked to supply tens of millions of Covid tests to the NHS after exchanging Whatsapp messages with the Health Secretary

Ms Lucas said: ‘This indictment of Government secrecy should spell the end of the culture of cronyism which has swallowed billions of pounds of public money during Covid crisis.’

In a statement, a DHSC spokeswoman said: ‘We have been working tirelessly to deliver what is needed to protect our health and social care staff throughout this pandemic, within very short timescales and against a background of unparalleled global demand.

‘This has often meant having to award contracts at speed to secure the vital supplies required to protect NHS workers and the public.’

She added: ‘We fully recognise the importance of transparency in the award of public contracts and continue to publish information about contracts awarded as soon as possible.’

It comes after the former landlord of Mr Hancock’s local pub supplied tens of millions of Covid tests to the NHS after sending him a personal WhatsApp message – despite his company having no previous experience of making medical supplies.

Alex Bourne got to know the Health Secretary while running the Cock Inn in Thurlow, West Suffolk, a few hundred yards from the Conservative MP’s constituency home. The pair are also Facebook friends.

He later set up Hinpack, a packaging manufacturer, which is now supplying a distributor contracted by the NHS with two million test tubes a week, as well as around 500,000 plastic funnels for test samples. How much the company is being paid is not yet known.

The Government has faced repeated claims of cronyism over its £18billion rush to source PPE and other equipment during the Covid crisis, with ministers criticised for handing lucrative contracts to personal contacts with no experience in the sector.

Mr Bourne admitted to exchanging personal WhatsApp messages with Mr Hancock but denied his connection helped win the business. He said Hinpack was a British manufacturing success story that had retooled to meet an urgent demand.

The way the Government sourced PPE and other equipment during the early stages of the Covid crisis has repeatedly drawn criticism, and was detailed in a recent report by the National Audit Office (NAO).

Many companies with zero experience of supplying PPE won multi-million pound deals while suppliers with political contacts were ten times more likely to get business.

The NAO said it would launch an urgent investigation into one extraordinary deal for surgical gloves and gowns with a Florida-based jewellery designer where Spanish businessman, Michael Saiger, who served as a middleman, was paid an astonishing £21million in UK taxpayers’ cash.

The report – which came out last week, sparked claims the Government had frittered away huge sums of public in flawed and uncompetitive contracts, sometimes buying ‘useless PPE’, with the ‘taxpayer now reaping the ruin’.

In another case, Sabia Mokeddem, a 23-year-old investor from Lyon, France, was given £880,000 to supply 55,000 coveralls despite not having any experience in the sector.

She said she acted as a go-between for a wholesaler in Hong Kong and has since completed delivery of all the coveralls, priced at £16 each. Miss Mokkedem said the coveralls cost £11 before the pandemic – but they charged £16 as market demand and rising cargo costs pushed up prices.

Labour MP Rachel Reeves said that ‘a select group have been given privileged access to the government’, adding: ‘The country deserves to have confidence their money is being spent effectively by the government – and to know without doubt that friends and donors to the Conservative Party aren’t profiting from this pandemic.’

But Business Secretary Alok Sharma insisted he would not say sorry for working rapidly to secure supplies during the coronavirus crisis and said: ‘We had to do an enormous amount of work very fast to secure PPE and that’s what we did, and I’m not going to apologise for the fact that quite rightly we made that effort’.