Theresa May was confronted by new calls to set out her exit strategy from No 10 today or risk facing a coup by restless Tories.

Many Conservative MPs are insistent the Prime Minister can never lead their party into another election after her disastrous 2017 campaign.

And there are warnings she could be forced out within weeks – possibly as soon as the Tory conference in a fortnight – without a climbdown on her Brexit plans. 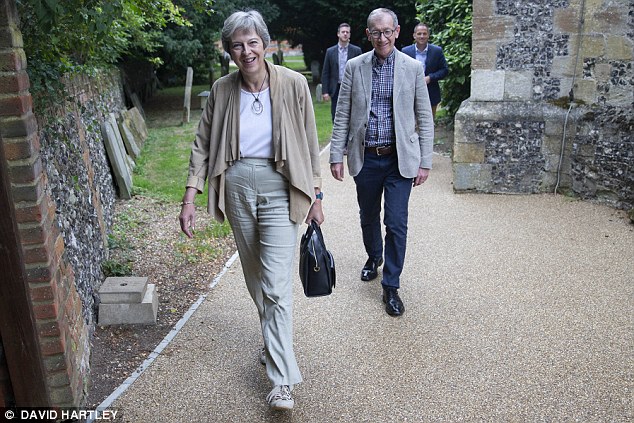 Theresa May (pictured  today at church in Maidenhead) was confronted by new calls to set out her exit strategy from No 10 today or risk facing a coup by restless Tories. Mrs May (pictured being greeted by Blitz at church today) insisted after throwing away the Conservative majority on a snap election she would only stay for as long as her colleagues wanted her. 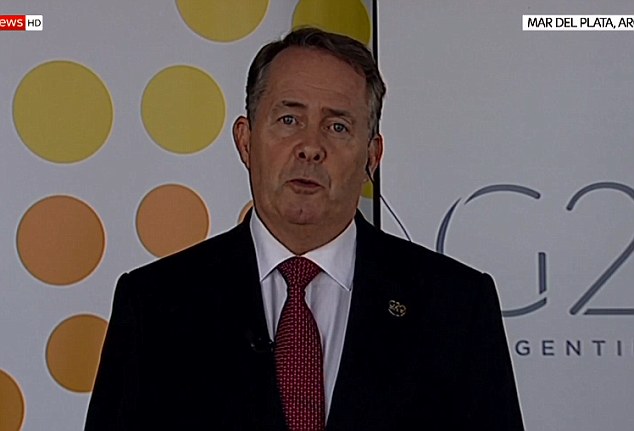 International Trade Secretary Liam Fox (pictured on Sky News today in Argentina) dismissed the claims about Mrs May’s future, insisting she was doing a good job and should stay on

Mrs May insisted after throwing away the Conservative majority on a snap election she would only stay for as long as her colleagues wanted her.

But she has since vowed to stay on at No 10 and lead the Tory charge next time, which is due in 2022.

One top Tory told the Sun on Sunday today: ‘She needs to chuck Chequers first and then throw us a bone about her own future.

What are the rules for Tory leadership contests?

A Tory leadership contest can be called in one of two ways – if the leader resigns or if MPs force and win a vote of no confidence in them.

Calling votes of no confidence is the responsibility of the chairman of the 1922 Committee, which includes all backbench Tory MPs.

Chairman Graham Brady is obliged to call a vote if 15 per cent of Tory MPs write to him calling for one – currently 48 MPs.

The process is secret and only Mr Brady knows how many letters he has received.

The no-confidence vote is purely on whether the leader should stay in place or not, rather than a contest.

Crucially, if the incumbent receives more votes in support than opposed they cannot be challenged for 12 months.

That procedure was last used in 2003 when Iain Duncan Smith was removed as Tory leader.

If the leader is ousted, any MP is eligible to stand in the subsequent competition.

Conservative MPs hold a series of ballots to whittle the list of contenders down to two, with the lowest placed candidate dropping out in each round.

The final two candidates are then offered to the Tory membership at large for an election.

Some activists have called for changes so it is easier for contenders to reach the final stage.

They have suggested that the membership should get to choose between any candidates who get support from at least 20 other MPs.

‘It does nothing to help her position when aides brief that she intends to stay on to fight the 2022 election.

‘That is not going to happen.’

International Trade Secretary Liam Fox dismissed the claims about Mrs May’s future today, insisting she was doing a good job and should stay on.

He told Sky News’s Sophy Ridge on Sunday: ‘I think the Prime Minister has done a great job in difficult circumstances, both domestically and in the difficult task of negotiating with the European Union.

‘Supporting the Prime Minister now is in the national interest. And if she wants to continue on to the next election she will have my support.

‘I think a Prime Minister that delivers a successful Brexit will have the support of the British people.’

The Conservative Party was rocked by a new bout of infighting this week after it emerged a group of hard Brexiteers openly discussed removing Mrs May.

Members of the European Research Group gathered in Parliament on Tuesday night and held a ‘brazen’ discussion about how to dislodge Mrs May from No 10.

Following the meeting, the most senior Eurosceptics were forced to rally around Mrs May even while hating her Brexit plan.

Speaking at the launch of the ERG’s Irish border plan today, the group’s leader Jacob Rees-Mogg said: ‘I have long said, and repeated again and again, that the policy needs to be changed but I am supporting the person.’

On Wednesday moderate Tories held their own meeting and called for a clear out of the old guard and resume David Cameron’s modernisation project. 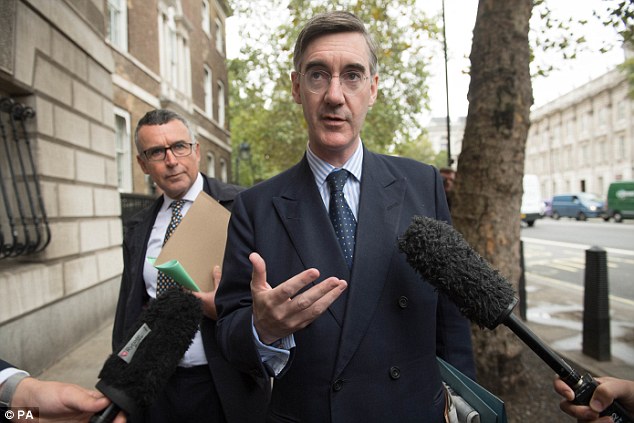