Theresa May is visiting the Irish border today amid signs tensions with the EU are escalating.

The Prime Minister is heading for Northern Ireland for talks with local businesses and residents as she seeks to shift the biggest obstacle to a deal with Brussels.

But Irish PM Leo Varakdar has ramped up the rhetoric by issuing an extraordinary threat to block planes from flying over his country to the UK if the EU’s demands are not met. ‘You can’t take back your waters and then expect to use other people’s sky,’ he said.

The sabre-ratting was derided by critics who pointed out that airspace rules are governed by an entirely separate international treaty – and most flights to Europe go over British airspace. 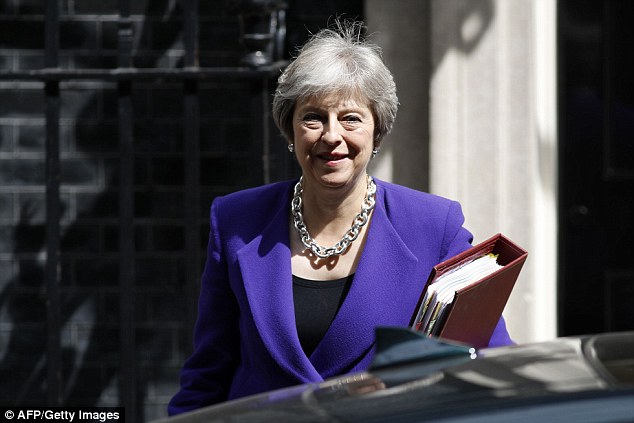 However, the jibe underlines the increasingly entrenched position being adopted by Brussels in the negotiations.

The EU has demanded Britain chooses between two options for avoiding a hard Irish border – an outcome both sides say they do not want.

The first option would see a ‘Norway plus’ arrangement with the UK remaining in the single market and customs union – accepting free movement and obeying Brussels rules without having any say in setting them.

The other option is a limited Canada-style free trade agreement for the British mainland – but Northern Ireland would effectively remain a part of the EU.

Mrs May has said both blueprints are totally unacceptable, and put forward a compromise plan that would see the UK follow rules on goods and collect some tariffs on behalf of Brussels to avoid border friction.

Eurocrats regard the ideas as ‘cherry picking’.

Mrs May will meet business representatives on the Northern Ireland side of the border this afternoon.

Tomorrow she is due to deliver a speech in Belfast focusing on how her vision of Brexit, outlined in last week’s Government white paper, will impact Northern Ireland and the border.

But Mr Varadkar upped the ante last night by telling journalists ‘planes will not fly’ if Mrs May did not convince the EU there will be no hard border. 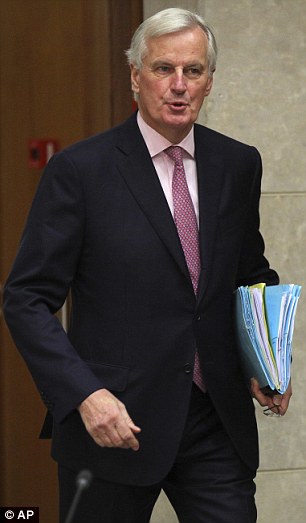 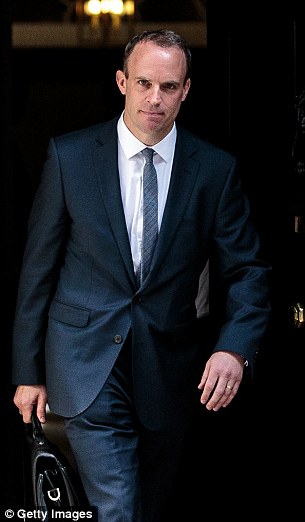 ‘The situation at the moment is that the United Kingdom is part of the single European sky, and if they leave the EU they are not and that does mean that if there was a no deal hard Brexit next March the planes would not fly and Britain would be an island in many ways, and that is something that they need to think about.

‘You can not have your cake and eat it. You can’t take back your waters and then expect to use other people’s sky.’

He added: ‘In the unlikely event that we have a hard Brexit next March, with no deal, I think every country will struggle to put in place the necessary infrastructure and customs and veterinary officials in their ports and airports. It won’t be just us.’

Ahead of her arrival, Mrs May said: ‘I look forward to hearing views from businesses on the border in Northern Ireland on our departure from the European Union.

‘I fully recognise how their livelihoods, families and friends rely on the ability to move freely across the border to trade, live and work on a daily basis.

‘That’s why we have ruled out any kind of hard border. Daily journeys will continue to be seamless and there will be no checks or infrastructure at the border to get in the way of this.

‘I’ve also been clear we will not accept the imposition of any border down the Irish Sea and we will preserve the integrity of the UK’s internal market and Northern Ireland’s place within it.’

Mrs May will also hold talks with the region’s political parties on the two-day trip, with separate bilateral meetings scheduled across both days.

Northern Ireland has been without a properly functioning devolved government for 18 months due to a bitter fallout between the two biggest parties – Sinn Fein and the Conservatives’ confidence and supply partners at Westminster, the Democratic Unionists.

So what would happen if we just walked away?

Leaving without a deal would mean an immediate Brexit on March 29 after tearing up a 21-month transition agreement. This included giving £39billion to the EU, which ministers would no longer have to pay, a House of Lords report claims.

The Chequers agreement effectively proposed keeping Britain in the single market for goods and agriculture to preserve ‘frictionless’ trade and protect the economy.

Customs checks on cross-Channel freight would cause havoc at ports, hitting food supplies and other goods.

Even Brexiteers admit to a big economic impact in the short term. Britain could waive customs checks on EU produce to free up backlogs, but would Brussels do the same?

All EU-UK trade in goods is free of tariffs in the single market.

Trade would revert to World Trade Organisation rules. The EU would charge import tariffs averaging 2-3 per cent on goods, but up to 60 per cent for some agricultural produce, damaging UK exporters.

We have a trade deficit with the EU of £71billion – they sell us more than we sell them – so the EU overall would lose out.

German cars and French agriculture would be worst hit, as would UK regions with large export industries. Tariffs could also mean price inflation. But UK trade with the EU is 13 per cent of GDP and falling compared to non-EU trade, which generates a surplus and is likely to grow. The outlook would be boosted by Britain’s ability to strike trade deals.

The UK would immediately have control over its borders and freedom to set migration policy on all EU migrants.

UK nationals would likely lose their right to live and work in the EU. There would be legal uncertainty for the 1.3million Britons living in the EU and the 3.7million EU nationals here.

Many firms have already made contingency plans for no deal, but there would probably be a significant degree of disruption and an economic hit.

Ministers would be likely to take an axe to tax and regulations to preserve the UK’s economic advantage.

Fears of planes not being able to fly appear far-fetched – unless the EU is determined to destroy both business and tourism. Rules to keep planes in the air are likely to be agreed. The EU has many deals with non-EU countries as part of its Open Skies regime.

Britain would be free from the edicts of the European Court of Justice in Luxembourg and all EU laws. Parliament would be sovereign.

THE UK would quit the Common Agricultural Policy, which gives farmers and landowners £3billion in subsidies. Ministers would come under pressure to continue a form of subsidy.

Northern Ireland would be outside the EU, with no arrangements on how to manage 300 crossing points on the 310-mile border.

The EU would want Ireland to impose customs and other checks to protect the bloc’s border – something it has said it will not do. No deal could blow a hole in the Good Friday Agreement, with pressure on all sides to find a compromise.